Home » Middle East » After the caliphate: Has IS been defeated? 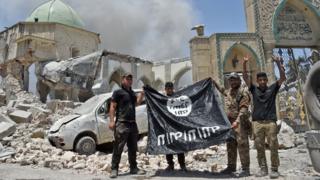 The US is to begin withdrawing its troops from Syria, where they are supporting fighters from the Kurdish-led Syrian Democratic Forces (SDF) alliance as they close in on the last pocket of eastern Syria controlled by the jihadist group Islamic State.

“We have won against [IS],” US President Donald Trump declared on 19 December. “Our boys, our young women, our men – they’re all coming back, and they’re coming back now.”

Four years ago, IS militants overran large swathes of Syria and neighbouring Iraq, proclaimed the creation of a “caliphate”, and imposed their brutal rule on almost eight million people. Now, they control only about 1% of the territory they once had. 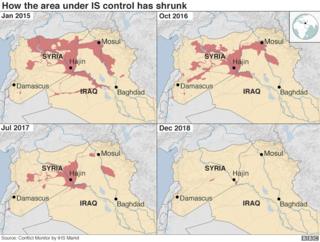 But while its physical caliphate is gone, the “enduring defeat” of IS is far from assured.

The SDF expressed alarm at Mr Trump’s decision, warning that it would “negatively impact the campaign to fight terrorism and give terrorism and its supporters military field and political clout to revive itself again”.

It echoed comments by the US Special Presidential Envoy for the Global Coalition to Defeat IS, Brett McGurk, who told reporters on 11 December: “It would be reckless if we were just to say, well, the physical caliphate is defeated, so we can just leave now.”

What next for IS?

Mr McGurk spoke days before the SDF captured the small Syrian town of Hajin, in the Middle Euphrates River Valley, after what US commanders say had been some of the most intense fighting they had seen in more than a year.

Hajin was the last IS bastion in Syria, but there are still estimated to be about 2,000 militants in the surrounding river valley who are expected to fight to the end.

Thousands more militants are also thought to be elsewhere in Syria.

In August, the US defence department estimated there were as many 14,000 IS militants in Syria and 17,000 others in Iraq, where they no longer fully control any territory.

Many militants have gone underground and returned to their insurgent roots, carrying out bombings, assassinations and kidnappings while attempting to rebuild their networks.

More than 5,600 IS supporters who travelled to Syria and Iraq from dozens of countries around the world have also returned home. An October 2017 study by the US-based intelligence group the Soufan Center found that about 1,200 had returned to the European Union – including 425 to the UK, and about 300 each to Germany and France.

UN experts meanwhile estimate that there are between 3,000 and 4,000 IS militants in Libya and about 4,000 in Afghanistan. IS also has a presence in South East Asia, West Africa, Egypt’s Sinai peninsula, Yemen, Somalia and the Sahel.

Individuals inspired by the group’s ideology also continue to carry out attacks elsewhere.

IS exploited chaos and divisions

IS grew out of al-Qaeda in Iraq, which was formed by Sunni Arab militants after the US-led invasion in 2003 and became a major force in the country’s insurgency.

In 2011, the group – now known as Islamic State in Iraq (ISI) – joined the rebellion against President Bashar al-Assad in Syria, where it found a safe haven and easy access to weapons.

At the same time, it took advantage of the withdrawal of US troops from Iraq, as well as widespread Sunni anger at the sectarian policies of the country’s Shia-led government.

In 2013, ISI began seizing control of territory in Syria and changed its name to Islamic State in Iraq and the Levant (Isis or Isil).

The following year, Isis overran large swathes of northern and western Iraq, proclaimed the creation of a “caliphate”, and became known as “Islamic State”.

A subsequent advance into areas controlled by Iraq’s Kurdish minority, and the killing or enslaving of thousands of members of the Yazidi religious group, prompted a US-led multinational coalition to begin air strikes on IS positions in Iraq in August 2014.

The battle to push IS out of Iraq and Syria has been bloody, with thousands of lives lost and millions of people forced to flee their homes.

In Syria, troops loyal to President Assad have battled the jihadist group with the help of Russian air strikes and Iran-backed militiamen. The US-led coalition has meanwhile supported the SDF, an alliance of Syrian Kurdish and Arab fighters, and some Syrian Arab rebel factions in the southern desert.

In Iraq, local security forces have been backed by both the US-led coalition and a paramilitary force dominated by Iran-backed militias, the Popular Mobilisation.

Since then aircraft deployed as part of the coalition’s Operation Inherent Resolve have carried out almost 13,500 air strikes in Iraq and more than 17,100 in Syria.

Russia is not part of the coalition, but its jets began air strikes against what it called “terrorists” in Syria in September 2015 to bolster the government of President Assad.

Early progress in the US-led coalition’s campaign against IS included the recapture of the city of Ramadi, the capital of Anbar province in Iraq, by Iraqi pro-government forces in December 2015.

The recapture of Iraq’s second city of Mosul in July 2017 was seen as a major breakthrough for the coalition, but the 10-month battle left thousands of civilians dead and saw more than 800,000 others forced to flee their homes in the city.

In October 2017, the Syrian city of Raqqa, so-called capital of the self-styled “caliphate”, was re-taken by the SDF with coalition air support, ending three years of rule by IS.

The following month, the Syrian army regained full control of the eastern city of Deir al-Zour, and Iraqi forces retook the key border town of al-Qaim.

Many thousands have been killed

Exact numbers of the casualties for the war against IS are not available.

The Syrian Observatory for Human Rights, a UK-based monitoring group, has documented the deaths of 364,792 people, including 110,687 civilians, in Syria since the country’s civil war began in 2011.

The UN says at least 30,839 civilians have been killed in acts of terrorism, violence and armed conflict since 2014. But Iraq Body Count, an organisation run by academics and peace activists, puts the civilian death toll at more than 70,000.

At least 6.6 million Syrians have been internally displaced, while another 5.6 million have fled abroad – more than 3.5 million of them have sought refuge in Turkey, and almost one million in Lebanon and almost 700,000 in Jordan.

Many Syrians have sought asylum in Europe, with Germany taking the greatest number.

In Iraq, the number of displaced people has fallen below 2 million for the first time since December 2013.

But the UN reports that a lack of jobs and destruction of property and limited access to services are still preventing many people from returning to their homes.

'No to dictatorship!': Algerians rally on independence day