Young cartoonist had in recent weeks posted caricatures critical of the country’s military before December 12 vote. 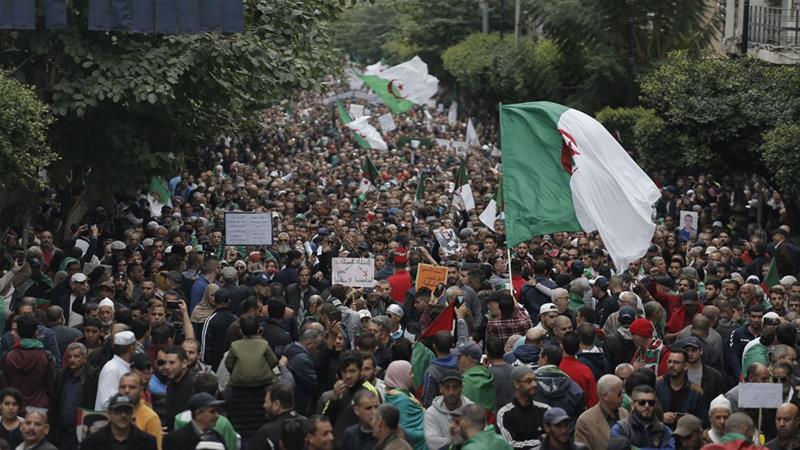 A court in Algeria has ordered a cartoonist be kept in pre-trial detention in a move that activists decry as part of a government clampdown on free expression in advance of a controversial presidential election.

Police in plain-clothes arrested Abdelhamid Amine on Tuesday after raiding the premises of his creative agency in the northwestern city of Oran and seizing all of his material.

Local reports in the North African country on Thursday said Amine is expected to be presented before the court on December 5, almost 10 days after his arrest.

Algerian authorities have detained hundreds of demonstrators in recent months over their objection to the December 12 presidential vote.

The National Committee for the Release of Detainees, a local NGO, said in a statement on Thursday the artist’s arrest was likely due to his most recent works that dealt with the upcoming election.

In one of his caricatures, Amine shows army chief Lieutenant General Ahmed Gaid Salah, prostrating before former Prime Minister Abdelmadjid Tebboune as the powerful general tries to fit a shoe on the presidential candidate – a scene reminiscent of the Walt Disney classic, Cinderella.

Many view Tebboune, a Bouteflika loyalist, as the military’s preferred candidate in the polls.

In another image, the army chief is seen alongside interim President Abdelkader Bensalah, sewing a superhero cape for Tebboune.

Algerians began taking to the streets on February 22 this year to protest, initially against ailing Bouteflika’s plans to remain in office, and then for the removal of all those who served under his 20-year rule.

The demonstrators have repeatedly demanded that key figures of the ruling elite step down and credible institutions be established before an election is held.

Algeria’s army, arguably the country’s most stable and organised institution, has pledged not to interfere in the election.

US troops stay in Syria until Isil is gone – Bolton

Iran says US bases and aircraft carriers within missile range