US embassy said it would be closed to the public as of Monday as a result of an unspecified security threat. 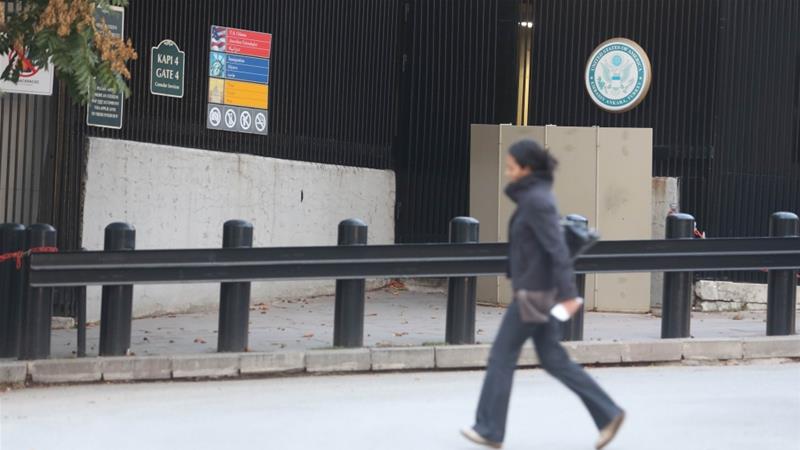 Turkish police have arrested 12 people in the capital, Ankara, in an investigation of an armed group, state media reported.

The arrests came hours after the US embassy in Ankara said it would remain closed for the day due to a “security threat”.

The 12 suspects were among 20 people for whom detention warrants were issued by the Ankara state prosecutors’ office, state-run Anadolu Agency said.

It said they were foreign citizens and had been seeking to recruit new members to their group.

The US embassy said on Sunday it would be closed to the public as of Monday, as a result of a security threat it did not specify, and only emergency services would be provided.

The embassy advised US citizens in Turkey to avoid large crowds and the embassy building, and to be aware of their own security when visiting popular tourist sites and crowded places.

Visa interviews and other routine services would be cancelled on Monday, the embassy said, adding that it would make an announcement when it was ready to reopen.

The embassy was the target of a 2013 suicide bombing, claimed by a far-left group, that killed a Turkish security guard.

Relations between NATO allies, Washington and Ankara, have been strained over a number of issues, notably the US arming of Kurdish fighters in northern Syria, the Kurdish People’s Protection Units (YPG).

Turkey launched an operation on January 20 against the YPG in its border stronghold of Afrin in northwestern Syria.

Turkey considers the Kurdish Democratic Union Party (PYD) in Syria and its armed wing YPG to be “terrorist groups” with ties to the outlawed Kurdistan Workers’ Party (PKK), active in Turkey.

The PKK has waged a decades-long armed fight against the Turkish state that has killed tens of thousands of people.

Turkey has repeatedly called on Washington to stop working with the YPG.

The US, in return, has expressed concern about the Turkish operation dubbed “Olive Branch” and urged restraint from Turkey.