Home » Middle East » As Israel Reopens, ‘Whoever Does Not Get Vaccinated Will Be Left Behind’

New government and business initiatives are moving in the direction of a two-tier system for the vaccinated and unvaccinated, raising legal, moral and ethical questions. 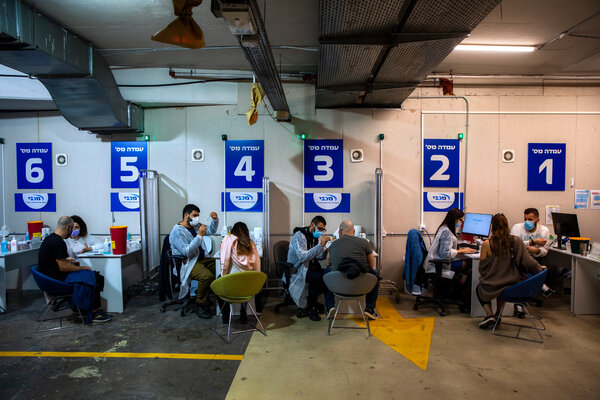 BAT YAM, Israel — Israel has raced ahead with the fastest Covid vaccination campaign in the world, inoculating nearly half its population with at least one dose. Now, the rapid rollout is turning the country into a live laboratory for setting the rules in a vaccinated society — raising thorny questions about rights, obligations and the greater good.

Prime Minister Benjamin Netanyahu’s cabinet voted this week to open shopping malls and museums to the public, subject to social distancing rules and mandatory masking. For the first time in many months, gyms, cultural and sports events, hotels and swimming pools will also reopen, but only for some.

Under a new “Green Badge” system that functions as both a carrot and a stick, the government is making leisure activities accessible only to people who are fully vaccinated or recovered starting from Sunday. Two weeks later, restaurants, event halls and conferences will be allowed to operate under those rules. Customers and attendees will have to carry a certificate of vaccination with a QR code.

Israel is one of the first countries grappling in real time with a host of legal, moral and ethical questions as it tries to balance the steps toward resuming public life with sensitive issues such as public safety, discrimination, free choice and privacy.

“Getting vaccinated is a moral duty. It is part of our mutual responsibility,” said the health minister, Yuli Edelstein. He also has a new mantra: “Whoever does not get vaccinated will be left behind.”

The debate swirling within Israel is percolating across other parts of the world as well, with plans to reserve international travel for vaccinated “green passport” holders and warnings of growing disparities between more-vaccinated affluent countries and less-vaccinated poor ones.

Israel’s central government — eager to bring the country out of its third national lockdown without setting off a new wave of infections — was spurred into action by local initiatives. Chafing under the country’s lockdown regulations, an indoor shopping mall in the working-class Tel Aviv suburb of Bat Yam threw its doors open last week for customers who could prove that they had been vaccinated or had recovered from Covid-19.

In Karmiel, the mayor made a similar decision to open his city in the northern Galilee region for business. His office began processing requests from employers who could verify that all of their employees had received the requisite two vaccine doses or had recovered from the virus.

And in other cities, mayors wanted to bar unvaccinated teachers from classrooms while some hoteliers threatened unvaccinated employees with dismissal.

Time to admit that the wrong side won?