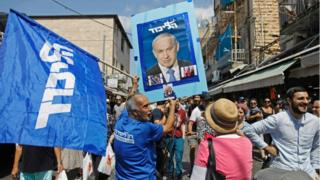 Everything is very close in this troubled land. It’s small. Travelling around and across land that has been fought over doesn’t take long. Enemies, resentment, hopes and disappointment are never far away.

I took a drive down the Jordan Valley. It runs between the Sea of Galilee and the Dead Sea, mostly sandy and rocky desert. It is the deepest valley in the world, going down to 1,300 feet (400m) below sea level. The domes of the monastery of the Temptation, built into the cliffs stare down on Jericho, the Palestinian city that claims to be the oldest in the world. Christians believe Satan appeared somewhere near here to Jesus, tempting him during his 40 days and nights of fasting.

The southern end of the valley, where I am, has been occupied by Israel since 1967, a big part of the land it captured in that year’s Middle East War

Usually the valley is a sleepy place. But Israel’s Prime Minister Benjamin Netanyahu has pushed it into his country’s general election, which is coming up this Tuesday. He declared that if he was returned as prime minister, he would annex the Jordan Valley, and Jewish settlements in the occupied West Bank. The suggestion has been condemned by many of Israel’s friends, including Britain, on the grounds that it would be yet another nail in the coffin containing hopes for peace. Israel would have absorbed land Palestinians want for a state.

He’s offering Israeli right-wingers a tasty electoral inducement to vote for him. He needs the votes. The election will be close.

More than anything else, it is a referendum on Mr Netanyahu, who has overtaken Israel’s founding father David Ben Gurion as its longest-serving prime minister.

In Jerusalem, I went to an ultra-Orthodox rally. I headed for one of the religious neighbourhoods of the city. Thousands of men in black coats and hats, beards and skullcaps jammed into a closed-off major city highway. They were there to declare support for a coalition of religious parties, who are staunch supporters of Mr Netanyahu. He needs their support to form a new government.

Israel’s electoral system always produces coalitions. Would-be prime ministers need to add their own party’s seats to those of smaller parties who exact a price for giving their support. The ultra-Orthodox have been staunch supporters of Mr Netanyahu. Without their seats, he would not be able to form a government.

Israel is a strong country. Its achievements are remarkable. But it also has a streak of insecurity, understandable given the history of the Jews and of the Israeli state. Mr Netanyahu plays on those fears. His campaign has majored on Israel’s enemies in Iran, Syria and Lebanon.

His message, repeated time after time, is that the Middle East is a tough neighbourhood and he is the only politician who can keep Israelis safe. Election posters show him with US President Donald Trump, both men smiling, suggesting a unique partnership that only Mr Netanyahu can maintain.

His main rival is a centre-left coalition, called Blue and White, led by a retired general, Benny Gantz, and Yair Lapid, a TV personality turned politician. General Gantz says he can restore honour to the premiership. Mr Netanyahu faces serious corruption charges, which he denies. His opponents say he has divided and cheapened Israel.

On polling day, it might come down to turnout. Israelis get election days off – and it’s perfect beach weather.

'The people are being robbed': Voices from Baghdad