BEIRUT, Lebanon — After the August port explosion that disfigured much of Beirut, many compared the city to a phoenix that would rise again.

“We are staying,” read some signs in the famous nightlife district of Mar Mikhael, one of the worst-hit neighborhoods. Down the main thoroughfare in Gemmayzeh, another badly damaged area whose graceful old buildings housed storied families and Beirut newcomers alike, it was the same: Residents vowed to return, and banners on buildings promised to rebuild.

Two months later, some businesses have begun to reopen, and teams of volunteer engineers and architects are working to save heritage buildings. But even the bullish say they do not believe a full recovery is possible, pointing to the lack of government leadership and resources, combined with an imploding economy that has put even basic repairs beyond the wallets of many residents.

If Beirut is a phoenix, it has already endured too much, they say: civil war; war with Israel; incompetent and corrupt governments; huge protests, the coronavirus and now this. 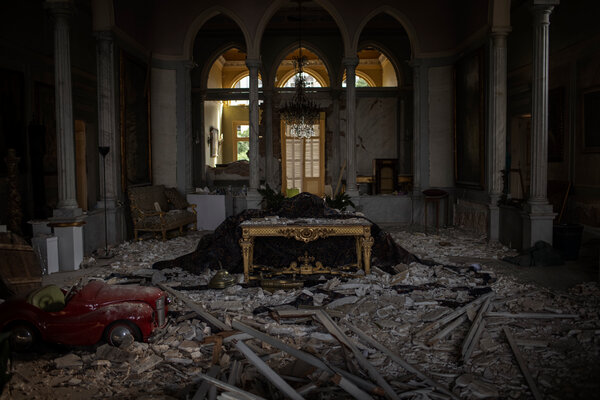 Though they were traditionally Christian neighborhoods, Mar Mikhael, Gemmayzeh and the surrounding areas attracted young Lebanese of different religious backgrounds, as well as foreigners and tourists, to its bars, cafes and art galleries.Gay, lesbian and transgender people felt safe. Entrepreneurs and designers moved in. Dusty hardware stores sat a few doors down from trendy coffee shops.

The explosion has threatened that unique social fabric, locals say.

And not all are ready to return. It would feel like erasing what happened, a few said — like walking blithely over a grave.

At the edge of Gemmayzeh, between a church and an antique chandelier shop, a narrow street darts up the hill at odd angles. Locals call it Thieves’ Lane, from long ago, when it was a quick getaway route from the authorities.

Over the last year, antigovernment protesters dodging tear gas have often sprinted the same way and ducked into Demo, a bar with pleasantly worn wooden benches and experimental music thrumming from the D.J. booth.

Its owner, Tarek Mourad, 38, opened Demo with a partner a decade ago, and it became a Beirut classic. The bar’s glass front was smashed in the explosion, and Mr. Mourad turned to GoFundMe to replace it.

“When you spend years planting something,” he said, “and suddenly there’s something that cuts the plant down, you hope the roots are there.”

But he was not sure whether everything that made Demo what it had been would return — the small shops and bakeries nearby that gave the street life, neighbors who stopped in for coffee or a beer.

“Everyone that works at Demo, or lives around it, needs to get back and get their lives back,” he said. “But it’s not just Demo, it’s a whole neighborhood. For years, I walked through Gemmayzeh daily. Now it’s not there anymore. What form it’ll take, I don’t know.”

Fadlo Dagher’s family began building their pale-blue villa on the main street of Gemmayzeh in 1820. To him, the houses in the neighborhood — and throughout Beirut — represent the tolerant, diverse, sophisticated country Lebanon was meant to be.

The houses — generally wide dwellings a few stories high, with red tiled roofs and tall, street-facing triple-arched windows opening onto a central hall — began appearing in Beirut by the mid-1800s, after the city grew into a hub for trade between Damascus, Syria, and the Mediterranean.

The style blended architectural ideas from Iran, Venice and Istanbul. While the new houses’ walls were of Lebanese sandstone, their marble floors and columns were imported from Italy, roof tiles from Marseille, France, and cedar timbers from Turkey.

Despite war, neglect and a 20th-century fashion for high-rises, many of the old houses stood untouched in Gemmayzeh and Mar Mikhael until the explosion, which seriously damaged about 360 structures built between 1860 and 1930.

To abandon them, Mr. Dagher said, would be to jettison one of the few shared legacies of a perpetually fractured country.

“I’d like to imagine that what is happening here, this diversity, this mixed city, that it still exists, that maybe it can reflourish,” he said. “Is it mission impossible? I don’t know. But, OK, call me a dreamer. This is what I want it to be.”

Habib Abdel Massih, his wife and son were in the small corner convenience store he owns in Gemmayzeh when the neighborhood blew apart, injuring all three. He has spent his whole life in the neighborhood, watching it change from quiet residential area to cultural destination.

“Suddenly, everything changed,” he said. “Most of the people I used to know have left.”

He worried that rebuilding would prove too expensive, that neither original residents nor newcomers would come back.

A few weeks after the blast, Mr. Abdel Massih, 55, was preparing to reopen his store. A cast sheathed his foot. He was selling water and coffee, he said. Not much else.

Lady Yvonne Sursock Cochrane grew up in the palace, which was built by her forebears in the mid-1800s. She spent decades protecting it — first from Lebanon’s 15-year civil war (by staying put), and then from overdevelopment (by buying up neighboring properties). She was injured in the Aug. 4 explosion as she sat on her terrace, debris falling in a neat border around her chair. She died on Aug. 31, aged 98.

Her son and daughter-in-law, Roderick and Mary Cochrane, are rebuilding. They do not yet know the price, only that it will be astronomical.

“You restore things because it’s part of the history,” said Ms. Cochrane, an American. She was hospitalized after the explosion but recovered. “We take care of it for future generations.”

Mr. Cochrane added: “Mar Mikhael and Gemmayzeh should remain a place for Lebanese, for small designers, small shops, small business owners. Without these, there’d be no Beirut. We’d be a city like Dubai.”

Bashir Wardini, an owner of Tenno and Butcher’s BBQ

Just off the main drag of Mar Mikhael — where the sound of laughter, clinking glasses and pounding car stereos once floated up from the pubs to the balconies nearly every night — sit Butcher’s BBQ and, nearby, a cocktail bar, Tenno. The main street is dark and quiet now; many homes remain uninhabitable.

But Tenno is open.

Bashir Wardini and his partners raised about $15,000 through GoFundMe, and in mid-September muted their doubts and reopened to host a friend’s birthday drinks. They had not been sure customers were ready to return. They were not sure they were ready, either.

“Many of us, and our customers, said, ‘No, you have to reopen, you have to move on, because the street needs to feel some kind of life again,’” Mr. Wardini said.

Tenno looks itself again, but the rest of the neighborhood feels wrong. Mr. Wardini said still he avoids going there, unless he has to.

“It takes a few drinks too many to forget the surroundings,” he said.

Winter storm sweeps across the Levant

US warns Iran is preparing a 'nuclear breakout'