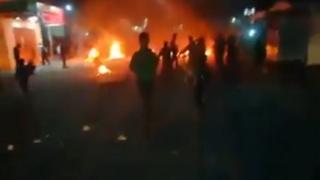 In Gaza, it is no surprise to hear complaints about the terrible living conditions – after all, the World Bank describes a local economy in “free fall” with 70% unemployment among young people.

However, what has been extraordinary in recent days is that large crowds of Palestinians have been turning out on the streets to voice their frustration and even criticise Hamas – the militant Islamist group which rules the strip with an iron fist.

Messages by the 14th March Movement – which has the slogan “We want to live” – began to appear on social media last week.

“It’s a peaceful, popular youth movement,” says Moumen al-Natour, one of the organisers, in his Facebook message. “We’re not political and we don’t want to change political systems. We just want to get our rights.”

“We want jobs, we want to live. We want equality, dignity and freedom,” he adds.

On Thursday and the days since, hundreds of demonstrators have turned out in nine locations in Gaza’s city centres and refugee camps.

The protests are on a scale and of an intensity that has not been seen since Hamas took full control of Gaza in 2007, ousting Palestinian Authority (PA) security forces in bloody street battles, a year after the group won a parliamentary election.

The Hamas response to the protests has been harsh.

I condemn the Hamas violence in #Gaza against protesters, women, #children; journalists & human rights activists. #Palestinian factions must engage with Egypt on the basis of the the Cairo Agreement. #UN is working to avoid escalation, lift the closures, & support reconciliation

Dozens of people have been arrested and had their homes raided, among them activists, journalists and human rights workers.

Two workers from the Palestinian Independent Commission for Human Rights were badly beaten and detained.

“I strongly condemn the campaign of arrests and violence used by Hamas security forces against protesters, including women and children,” stated the UN Special Co-ordinator for the Middle East Peace Process, Nickolay Mladenov.

“The long-suffering people of Gaza were protesting the dire economic situation and demanded an improvement to the quality of life in the Gaza Strip. It is their right to protest without fear of reprisal.”

Hamas is blaming its political rival, Fatah, for stirring up unrest to destabilise Gaza and undermine its authority. Fatah dominates the PA, which governs parts of the occupied West Bank.

However, some activists online have criticised both of the main factions for failing to end their damaging political rift and have accused them of showing little regard for people’s everyday suffering.

At the heart of Gaza’s economic woes is a blockade by neighbouring Israel and Egypt – restricting the movement of people and goods – which was tightened after the Hamas takeover. Hamas is designated a terrorist group by Israel, the US, EU and UK.

In the past two years, the PA has piled on financial pressure as it has tried to reassert its control over the strip. Cash-strapped Hamas has recently hiked taxes, raising prices and pushing many people in Gaza to the brink.

One widely circulated video from the ongoing protests shows a woman in central Gaza angry that her husband and four sons have no jobs. Meanwhile, she says, “the sons of Hamas leaders have houses and jeeps and cars, and can get married while ordinary people have nothing, not even a piece of bread”.

Palestinian woman criticizes Hamas:
"Hamas officials' children drive in luxurious cars, but I have 4 unemployed sons. All of Gaza are unemployed because of Ismail Haniyeh & Yahya Sinwar. These officials care nothing about the poor people's necessities. We have the right to live." pic.twitter.com/caE84QcQKm

Hamas has tried to create distractions from the new protest movement.

On Sunday, at the time of the “We want to live” demonstrations, the group organised rallies celebrating an attack by a Palestinian in the West Bank that left two Israelis dead.

There have been other recent signs of cracks in the command of Hamas.

On Thursday, as an Egyptian delegation trying to broker a more lasting truce between the group and Israel sat down for talks, two rockets were fired from Gaza at Tel Aviv for the first time since 2014.

Israel responded with some 100 air strikes on what it said were militant sites.

Afterwards, as the Egyptians intervened to bring calm, the rocket launches were put down to “a mistake”, and for the first time since they began a year ago, Hamas cancelled its call for weekly demonstrations along Gaza’s boundary fence with Israel.

Israeli journalists have observed that right now their country faces a paradox.

Usually, Israel would be pleased to see an uprising against Hamas in Gaza, hoping this could lead to the group’s downfall.

But in the run up to April’s general election in Israel, the country worries about turmoil and what other diversions Hamas might have in mind.

Iran to launch satellite; US says programme linked to missiles