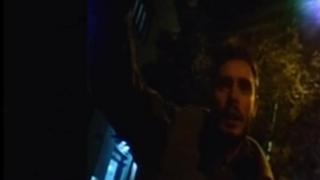 Egyptian state television has aired a video of murdered Italian student Giulio Regeni, showing him being asked for money weeks before his death.

Footage shows the 28-year-old speaking to the head of a Cairo street vendors’ union, who reported him to police a few weeks before he died.

Mr Regeni was in Egypt conducting postgraduate research into trade unions when he disappeared on 25 January 2016.

His tortured body was found in a ditch nine days later.

In the video the union head, Mohamed Abdallah, repeatedly requests payments from the student, who was studying at Cambridge University in the UK.

“My wife has a cancer operation, I will do anything as long as there is money in it,” said Mr Abdallah.

Mr Regeni replied, in Arabic: “Mohamed, I cannot use the money because it is not my money. I cannot use it like that because I am an academic.

“I cannot tell the institution in Britain in the application that I want to use the money for personal reasons.”

The student explained he would help Mr Abdallah to apply for a grant or workshop worth “10,000 pounds” for union activities but not for personal use.

Mr Abdallah said: “Is there no other way? A way with personal use?”

The foreign funding of civil society groups, including trade unions, is a contentious issue in Egypt.

The union leader has confirmed to news agency Reuters that it was him speaking in the video and he had recorded it himself, on his mobile phone, in early January last year.

He confirmed, as he has done before, that he later reported Mr Regeni to the police, believing him to be a spy. He told Reuters this was not retaliation for an unwillingness to give him money.

He also said the sum discussed was in British pound sterling, not Egyptian pounds.

His motivations for filming the conversation are not known.

Egyptian officials have denied any involvement in the student’s death.

The local police probe into the killing was criticised last year after sometimes contradictory accounts were issued by the authorities.

No-one has been arrested over Mr Regeni’s death, although in March Egyptian authorities said they had found a criminal gang responsible for his kidnapping and murder.

All the gang members were killed in a shoot-out, they said. The reports were branded “implausible” by academics who have criticised the Egyptian authorities.

Police initially suggested Mr Regeni had been killed in a road accident, and have since offered little information on the progress of their investigation.

On Sunday, Egypt agreed to allow Italian and German experts to retrieve and examine CCTV footage related to the murder.

They will try to view footage from a Cairo metro station, where Regeni is thought to have been last seen alive.

Egyptian prosecutors said they approved a request from Italy to send in experts, as well as data recovery experts from Germany.

In September, prosecutors said that Egyptian police investigated Mr Regeni shortly before his abduction, torture and murder, but the inquiry was dropped after concluding he posed no threat.