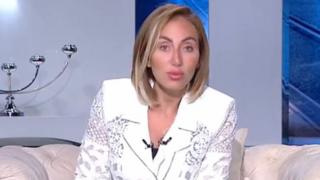 Egyptian TV host Reham Saeed has been suspended from appearing in the media over controversial remarks made about obese people.

The country’s media regulator said Saeed used words and phrases that were clearly offensive to women in Egypt.

On her show, Saeed said overweight people are “a burden on their families and the state”.

Her remarks come after President Abdul Fattah al-Sisi urged Egyptians to lose weight. In 2018, he called on Egyptians to take better care of themselves.

During Saeed’s talk show ‘Sabaya’ on al-Hayah TV, she said that many overweight women lose their femininity and happiness “because of the toxins in their bodies”.

She added that men are not attracted to overweight women and they often leave their obese wives or break off engagements.

Her remarks set off a storm of criticism on social media.

Saeed said she was being targeted on social media and confirmed on her Instagram account that she was retiring.

”I’m tired because whenever anyone wants to put you down, they wage a media campaign against you and tell fake stories about you to the people. And 200 or 300 or 400 or 500,000 people on social media that you don’t know, their backgrounds seal your fate.

“So I’m tired of this, and the time has come for me to take care of my children,” she said.

Saeed added that she had done much over the past 12 years to help obese people.

It’s not the first time the presenter has caused controversy with her comments. During a visit to Syrian refugees, she described them as disrespectful. In another incident, she removed an atheist from her show, even though the guest had been invited to discuss her atheism.