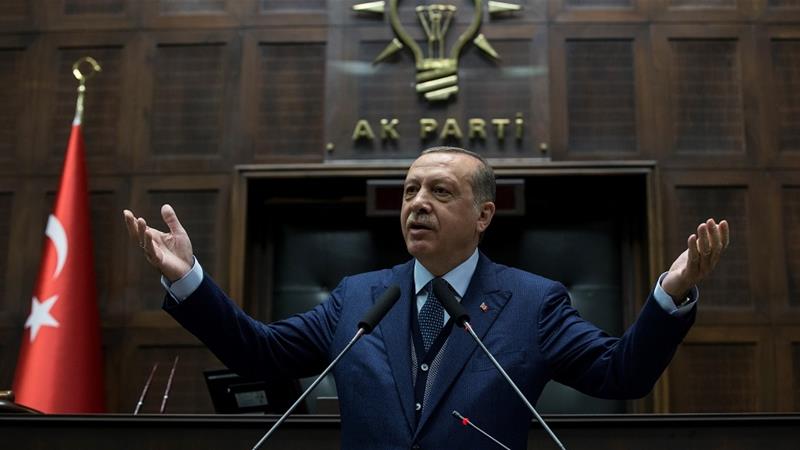 His remarks on Sunday came in response to Netanyahu’s earlier comments rejecting Ankara’s “moral lessons” over the Israeli army’s killing of Palestinian protesters in Gaza, and labelling Erdogan as someone who “bombs Kurdish villagers”.

“He says our soldiers are oppressing people in Afrin. Netanyahu, you are very weak, very poor,” Erdogan told the ruling Justice and Development Party (AK Party) congress in the southern Adana province.

“We are dealing with terrorists, but you are not. Because you are a terror state,” Erdogan added.

Calling the Israeli prime minister “an occupier” in Palestine, Erdogan said: “You are also a terrorist. History is recording what you have done to all those oppressed Palestinians … We are not guilty of any act of occupation.”

At least 17 Palestinians were killed and more than 1,500 were wounded on Friday when Israeli forces opened fire on “Land Day” protesters near the Gaza Strip’s eastern border.

Land Day is an event commemorating six Palestinian citizens of Israel who were shot dead by Israeli forces after protesting the government’s confiscation of large swaths of Palestinian land on March 30, 1976.

On Saturday, Erdogan “strongly” condemned “the Israeli government over its inhumane attack” in Gaza.

Friday’s rallies were also the start of a six-week protest that culminates on May 15, the day the Palestinians call “Nakba,” or the Catastrophe, when Israel was officially declared a state 70 years ago and more than 750,000 Palestinians were expelled from their homes.

The demonstrators are demanding that Palestinian refugees be allowed the right of return to towns and villages which their families fled from, or were driven out of, in 1948.

US urges India, Pakistan to 'avoid escalation at any cost'