Home » Middle East » Ever Given, the Ship That Blocked the Suez Canal, Is Moving On

More than three months after one of the world’s largest container ships blocked the Suez Canal, the vessel, the Ever Given, finally began its journey out on Wednesday, after Egyptian authorities reached a compensation agreement with the ship’s owners.

The ship had been impounded and was sitting, with many of its crew onboard, in part of the Suez Canal known as Great Bitter Lakes as the Suez Canal Authority and the ship’s Japanese owner were embroiled in a protracted argument over losses.

Its departure ends a saga that began March 23, with the grounded ship disrupting the global supply chain and drawing in insurers, lawyers, shipping bodies and much of the internet. People around the world closely watched for updates after the quarter-mile long vessel got mired in the canal, and memes followed, including some that saw the stuck ship as a metaphor for the state of the pandemic world.

The ship was refloated after six days of nonstop efforts, but reaching a deal to let the ship leave was an “operation of a different kind,” said Osama Rabie, head of the Suez Canal Authority at a ceremony on the eastern bank of the canal on Wednesday that was attended by Masaki Noke, Japan’s ambassador to Egypt.

The negotiations over the ship’s fate “began with the aim of preserving the Suez Canal’s rights after the losses it has suffered from the halt in maritime traffic,” Mr. Rabie said.

The ship’s first stop was the nearby Port Said where its hull was being inspected as a precaution before departing Egypt, according to a company statement from the ship’s technical manager, Bernhard Schulte Shipmanagement.

“We are very pleased that the Ever Given can finally continue her voyage,” said Ian Beveridge, the firm’s chief executive, thanking the vessel’s crew for “their resilience and professionalism throughout this period.”

Shoei Kisen Kaisha, the ship’s owners and a subsidiary of Imabari Shipbuilding, said in a statement that they had “strengthened” their relationship with the Suez Canal Authority through the experience. “Our company has a large fleet of ships and will continue to be a regular and loyal customer of the Suez Canal.”

Details of the settlement were not released, but the UK P&I Club, one of the ship’s insurers, said they had been “focused on reaching a fair and amicable settlement” and had “worked closely” with the Suez Canal Authority to finally find consensus.

With nearly 20,000 containers aboard, the Ever Given had been bound for Rotterdam in the Netherlands when high winds and poor visibility led it to run aground on March 23. The authorities worked for days, removing rock and sand before it was successfully refloated on March 29. 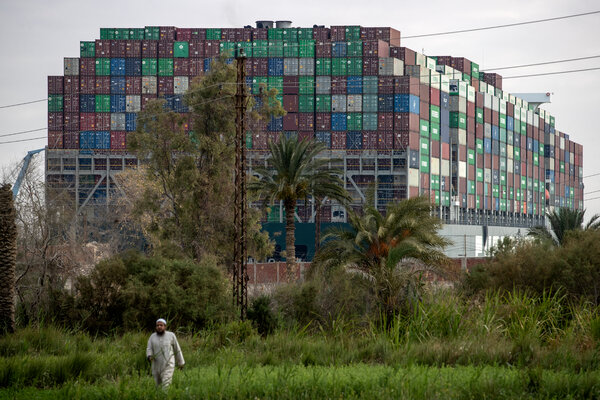 But with a backlog that had grown to over 300 vessels waiting to transit the canal, the refloating was not the end of the affair. In April, Egyptian authorities obtained a court order to detain the ship and argued the ship’s owners owed them $916 million in losses, a claim that the UK P&I Club called “largely unsupported.” Egypt later amended that claim to about $550 million.

On the global scale, the incident’s cost to world trade was much higher: $5.1 billion a day, according to the International Chamber of Shipping, which said it had helped the parties in the negotiation.

But a price could not be put on the well-being of its Indian crew, it said in a statement. “There are many lessons to be learned from the in-depth inquiry still underway, but we are pleased to see the Ever Given sailing again,” it said, adding that the crew was now free to “travel home to their loved ones after three months of uncertainty.”

“May God let it arrive safely,” said Tarek Alzeki, captain of a tugboat carrying reporters in the canal on Wednesday. “We are happy, of course.”

US Afghan peace envoy takes push for peace to Pakistan