Home » Middle East » For Israel and Hamas, Hard Choices Before Any Talks Could Begin

BRUSSELS — As the United States and Egyptian mediators head to Israel to begin de-escalation talks, the antagonists are weighing delicate internal considerations before agreeing to discussions on ending the violence.

Both Israel and Hamas first have to find ways to spin a narrative of victory for their publics, analysts say, but the task will be easier for Hamas than for Israel.

Israel’s caretaker prime minister, Benjamin Netanyahu, has to calculate the impact of the fighting on his own political fortunes, made more complicated by the internal unrest between Jews and Israeli Arabs in numerous cities inside Israel. The crucial decision for Israel is whether “victory” requires sending ground troops into Gaza, which would extend the conflict and significantly increase the number of dead and wounded on both sides.

For the Palestinians, the indefinite postponement of elections last month by the Palestinian president, Mahmoud Abbas, created a vacuum that Hamas is more than willing to fill. Hamas argues that it is the only Palestinian faction that, with its large stockpile of improved missiles, is defending the holy places of Jerusalem, turning Mr. Abbas into a spectator.

President Biden has spoken to Mr. Netanyahu and repeated the usual formula about Israel’s right to self-defense, and he has dispatched an experienced diplomat, the deputy assistant secretary of state Hady Amr, to urge de-escalation on both sides. 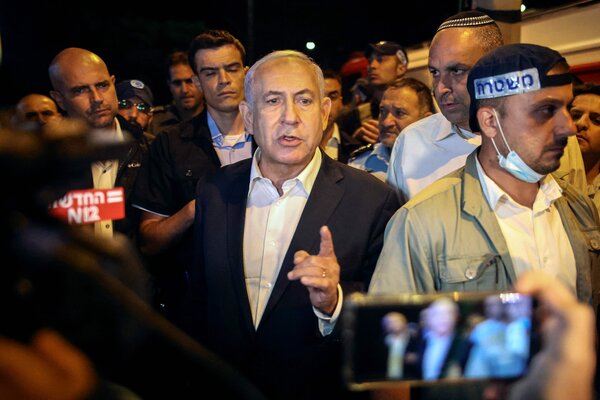 But the United States does not talk to Hamas, regarding it as a terrorist organization, and Mr. Abbas has no real control over Gaza or Hamas. So in all likelihood, Mr. Amr will be talking to Egyptian security officials, given that Egypt has been the usual interlocutor in concluding rounds of warfare between Israel and Hamas. That includes the last two big blowups, in 2008 and 2014, when the fighting lasted more than 50 days.

On Thursday, Egypt dispatched security officials to Tel Aviv and to Gaza to begin discussions, according to the state-controlled newspaper Al Ahram and the broadcaster Al Arabiya. Officially, Egypt’s Foreign Ministry, which does not deal with Hamas, had no comment.

On Tuesday, Egypt’s foreign minister, Sameh Shoukry, told a meeting of the Arab League that Egypt had reached out to Israel and other “concerned countries” to try to calm the violence, but that Israel had not been responsive.

Abdel Monem Said Aly, a longstanding analyst of Egyptian and regional relations in Cairo, said that “Egypt will do its best” in the interests of regional stability. But he warned that Mr. Netanyahu’s decision about whether to use ground troops would determine how long this round of violence lasted.

“The issue is much more complicated than previously,” he said, citing internal Israeli and Palestinian politics and Egypt’s efforts “to steer the whole region to a different more stabilized future.” Egypt has leverage over Hamas because of its land border with Gaza, which Cairo can shut or relax at will.

“And, of course, Egypt will talk to Saudi Arabia and the Emirates, those with money, about rebuilding in Gaza,” Mr. Said Aly said. “But the problem in Israel is not about talking to Mr. Netanyahu, that’s easy, but the winds inside Israel itself, and the big competition between different brands of conservatism.”

On the Palestinian side, he said, “There is a similar vacuum of political legitimacy, and Hamas will score by raising up Palestinian public opinion and increasing guilt in Islamic countries about the Palestinians and getting more legitimacy for future elections.”

Mr. Said Aly fears the events will increase Islamic radicalism both in Gaza and in Israel, among its young Arab population. “Of course, Egypt will talk to everyone,” he said. “We will talk of the problems of the whole region, and we won’t exclude the Palestinian issue. But how much anyone can help now is not clear.’’

Hamas also has reason to mistrust Egypt and its leader, President Abdel Fattah el-Sisi, according to Michele Dunne, a former American official and director of the Middle East Program at the Carnegie Endowment. Mr. el-Sisi sees Hamas as a branch of the Muslim Brotherhood, which remains powerful in Egypt, and in 2014 he did little to discourage Israel from invading Gaza in hopes of destroying Hamas.

The violence can take a long time to subside, said Mark A. Heller of the Institute for National Security Studies at Tel Aviv University. “At some point Israel reminds itself that there is no way it can bring about a decisive outcome at a tolerable cost to itself,” he said, “and Hamas realizes that the costs and risks to its own political viability and control over Gaza become too much.”

At that point, Mr. Heller said, Hamas agrees to “what they say is always a temporary cease-fire, not a peace, and usually gets some sort of payoff, I suspect this time from the Qataris.”

Egypt is usually the interlocutor “and the fig leaf” for negotiations between Hamas and Israel, which both sides deny but that are going on almost continuously over many smaller issues, he said.

Beyond such local concerns, Egypt is mindful that it needs to patch fences with Mr. Biden after the departure of President Donald J. Trump, said Daniel Levy, president of the U.S./Middle East Project. “I think Cairo wants to demonstrate its importance to Biden,” he said, noting the beginning of reconciliation talks with Qatar and Turkey.

Qatar, a rich emirate, bankrolls both Hamas and the Arab news operation Al Jazeera, and Turkey has been a strident supporter of Hamas. That had put them at odds with Egypt. But with the election of Mr. Biden, Egypt has gingerly followed Saudi Arabia and the United Arab Emirates in trying to calm relations with Qatar and Turkey.

Muslim countries have criticized Israel’s actions, but in largely perfunctory fashion so far, given that many of their leaders distrust Islamist radicalism. Many Arab countries have sidelined the Palestinian issue and are looking past Mr. Abbas to see, and try to manipulate, who will succeed him as head of Fatah and the Palestine Liberation Organization.

But, for now, with so much Israeli attention on the internal strife between young Jewish and Arab citizens, Mr. Levy said, many things are up in the air, and the struggle over Gaza can seem less important. It may also divert the Israeli security forces, making a ground incursion less likely.

“This strife is an extremely disorienting and worrisome development and a matter of far greater concern, frankly, than Hamas,” said Mr. Heller. “The army can take care of Hamas, but we need something to take care of Israeli society, and right now we don’t have that.”