Home » Middle East » For Netanyahu, like Trump, Only ‘Fraud’ Can Explain His Defeat

TEL AVIV — For Prime Minister Benjamin Netanyahu, Israel is witnessing “the greatest election fraud in the history of the country.” For Donald Trump, defeat last November was “the crime of the century.” The two men’s language overlaps, it seems, because their overwhelming sense of invincibility is confounded by democratic process.

Naftali Bennett, a right-wing nationalist, will take office as Israel’s prime minister Sunday, if approved by parliament, but Mr. Netanyahu’s raging assault on his likely successor shows no sign of relenting. He has said there is a “deep state” conspiracy.

Mr. Netanyahu accuses Mr. Bennett of conducting a “fire sale on the country.” A “government of capitulation” awaits Israel after a “stolen” election, he says. As for the media, it is supposedly trying to silence him through “total fascism.”

Although it appears that a peaceful democratic transition in Israel will take place, nothing is certain.

Attacks by Mr. Netanyahu’s Likud party on Mr. Bennett’s small Yamina party have been so vicious that some Yamina politicians have needed security details. Idit Silman, a Yamina representative in the Knesset, or parliament, said in an interview on Channel 13 TV that a demonstrator outside her home had told her he was pained by what her family was going through, “but don’t worry, at the first chance we get, we’ll slaughter you.” 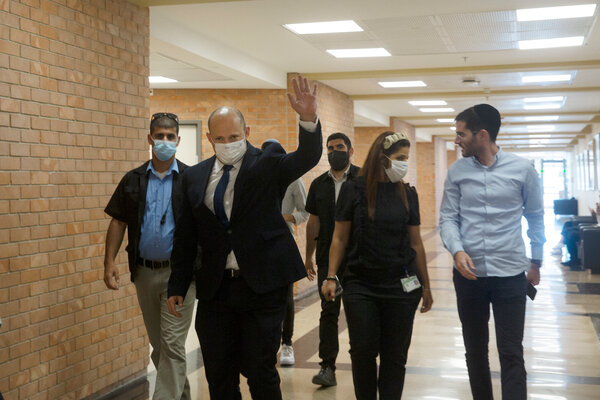 The apotheosis of Mr. Netanyahu’s whatever-it-takes methods has left violence in the air. The events of Jan. 6 in the United States, when a Trump-incited mob stormed the Capitol, are not far from Israelis’ minds.

“Over a dozen years, Mr. Netanyahu convinced himself that anyone else ruling Israel would constitute an existential threat,” said Dahlia Scheindlin, a political analyst. “His strong-arm tactics present a direct challenge to a peaceful transition of power.”

Division and fear have been Mr. Netanyahu’s preferred political tools; and like America, Israel is split, to the point that the head of Israel’s internal security service, Shin Bet, warned a few days ago of “extremely violent and inciting discourse.” It was an unusual warning.

The police have said they will not allow a nationalist march that had been scheduled Thursday through Muslim-majority areas of Jerusalem’s Old City, but feelings over it are running high among right-wing politicians after the original Jerusalem Day march last month was canceled because of Hamas rocket fire.

Mr. Netanyahu’s security cabinet decided Tuesday to reschedule the march, on a route to be agreed with the police, for next Tuesday, June 15. Mr. Netanyahu sees the march as an important symbol of Israeli sovereignty.

To hold the march would be playing with fire, as the short war with Hamas last month demonstrated. The issue, it appears, will now fall to the Bennett government to resolve.

No evidence has been produced to back claims that Mr. Bennett’s prospective new government is anything but the legitimate product of Israel’s free and fair March election, the fourth since 2019 as Mr. Netanyahu, indicted on bribery and fraud charges, has scrambled to preserve power.

Mr. Netanyahu calls Mr. Bennett’s tenuous eight-party coalition, ranging from far-right to left wing parties, a “dangerous” leftist government. But it is not the left that defeated the prime minister.

It is politicians on the right like Mr. Bennet and Gideon Saar, the prospective justice minister, who became convinced that Mr. Netanyahu had become a threat to Israeli democracy.

Alluding to the mass suicide at Masada of Jews who refused to submit to the Roman yoke, Mr. Bennett said in a speech explaining his decision to head an alternative government that Mr. Netanyahu “wants to take with him the entire national camp and the entire country to his own private Masada.”

It was an extraordinary image, especially from Mr. Netanyahu’s former chief of staff, and it captured the growing impression among many Israelis that the prime minister was determined, at whatever price, to leverage political survival into stopping the criminal process against him.

“He should have quit when the indictment came out in 2019,” said Yuval Shany, a law professor at Hebrew University of Jerusalem and former dean of its Law School. “Any reasonable politician would have stepped down. Instead, he went full throttle against the judiciary. In the end it seemed his main political aim was arriving at an immunity from prosecution arrangement.”

In other words, the personal — staying out of jail — had become paramount for Mr. Netanyahu. So much so that he was prepared to erode core institutions of the rule of law and democracy, like the Supreme Court, an independent judiciary and a free press. In this sense, the outbursts of recent days have been a culmination rather than a departure.

“He became a politician who would go to any lengths, without limits,” Mr. Shany said.

He had prominent company. Mr. Netanyahu, whose unpredicted 2015 electoral victory gave him a new sense of being all-powerful, formed close bonds with Viktor Orban, the Hungarian prime minister, and with Mr. Trump. He was drawn to leaders across the world intent on centralizing power in new, illiberal models.

What Mr. Netanyahu needed, through all those Israeli elections, was a majority strong enough to change Israel’s Basic Law to make prosecution of a prime minister in office impossible, and to take from the Supreme Court the power to strike such legislation down.

He never quite got that majority.

“There’s no doubt he wanted to narrow and minimize the authority of judicial review of the Supreme Court over both Knesset legislation and the administrative decisions of government bodies,” said Yohanan Plesner, the president of the Israel Democracy Institute. “But the checks and balances of our young democracy are intact.”

Those checks and balances are likely to get Israel to Sunday and a democratic change in government. But Israel, unlike the United States, is a parliamentary rather than a presidential democracy. Mr. Netanyahu will not disappear to some sunny retreat beside a golf course. As chairman of Likud, he will wield considerable power.

Could this be the ultimate selfie? Israeli spacecraft takes snap on roundabout journey to the moon