GAZA CITY — Diplomats and international leaders were unable Sunday to mediate a cease-fire in the latest conflict between Israel and Hamas, as Prime Minister Benjamin Netanyahu of Israel vowed to continue the fight and the United Nations Security Council failed to agree on a joint response to the worsening bloodshed.

The diplomatic wrangling occurred after the fighting, the most intense seen in Gaza and Israel for seven years, entered its deadliest phase yet. At least 42 Palestinians were killed early Sunday morning in an airstrike on several apartments in Gaza City, Palestinian officials said, the conflict’s most lethal episode so far.

The number of people in killed in Gaza rose to 197 over the six days of the conflict, according to Palestinian officials, while the number of Israeli residents killed by Palestinian militants climbed to 11, including one soldier, the Israeli government said.

On Sunday afternoon, the street bombed in the airstrike made for a desperate scene as Anas al-Yazji, a graphic designer, clambered over the rubble, searching for his fiancée, Shaimaa Abul Ouf. There was a wallet squeezed between the fragments of the shattered walls, a necklace, a Quran, even a few handbags. 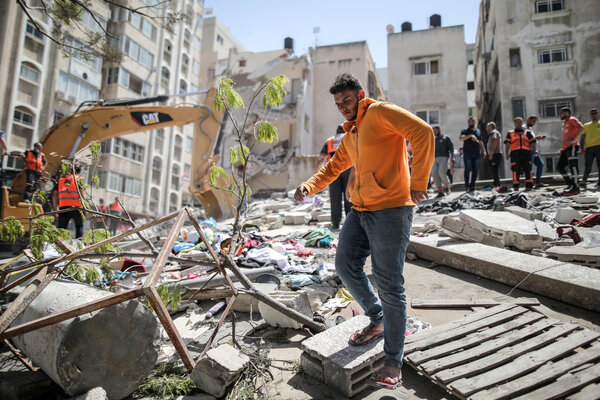 But 12 hours after Israel struck the building — aiming, the Israeli Army said, at an underground Hamas tunnel network — there was still no sign of Ms. Abul Ouf.

“I will wait here until we find her,” Mr. al-Yazji, 24, said as a yellow digger shoveled rubble from one pile to another. “Then I will bury her.”

By nightfall, the fighting showed no sign of letting up.

“Citizens of Israel,” Mr. Netanyahu said in a speech on Sunday afternoon at the headquarters of the Israeli Army in Tel Aviv, “our campaign against the terrorist organizations is continuing with full force.”

He added: “We want to exact a price from the aggressor, as in all types of terrorism. To restore the quiet and security and to rebuild deterrence and governance will take time.”

Mr. Netanyahu’s pledge came amid rising international criticism of Israeli airstrikes in Gaza, which began last Monday after Hamas fired rockets at Jerusalem following a month of rising tensions between Palestinians and Israelis in the holy city.

The Israeli Army says its goal is to destroy the military infrastructure of Hamas, the Islamist militant group that controls the Gaza Strip, a Palestinian enclave of about two million people that is under an Israeli and Egyptian blockade. Israel blames Hamas for the civilian casualties in Gaza, saying the group hides militants in residential areas.

That explanation came under intense scrutiny over the weekend when Israeli jets destroyed a tower in Gaza City that housed two major international news outlets, The Associated Press and Al Jazeera, after calling the building’s owner and telling him to evacuate tenants. An Israeli strike also killed at least 10 members of the same family in a house in a refugee camp and caused collateral damage to a clinic run by Doctors Without Borders, a medical aid group.

Then on Sunday morning, the airstrike hit Ms. Abul Ouf’s home. Two relatives said that the strike killed two members of her immediate family, at least 12 of her extended family and more than 30 neighbors, and that it left her mother in critical condition.

In a statement, the Israeli Army said it had “struck an underground military structure belonging to the Hamas terrorist organization which was located under the road.” It added: “Hamas intentionally locates its terrorist infrastructure under civilian houses, exposing them to danger. The underground foundations collapsed, causing the civilian housing above them to collapse, causing unintended casualties.”

The American ambassador to the United Nations, Linda Thomas-Greenfield, urged restraint on the part of both Hamas and Israel during Sunday’s Security Council meeting, which was called to try to find a way to end the violence.

“The United States calls on all parties to ensure the protection of civilians and to respect international humanitarian law,” she said. “We also urge all parties to protect medical and other humanitarian facilities, as well as journalists and media organizations.”

The Security Council adjourned without taking any action or even issuing a statement, which suggested the members couldn’t agree on what it would say. China’s ambassador, Zhang Jun, whose country holds the Council presidency this month, said after the meeting that he was working toward having the Council “take prompt action and speak in one voice.”

Hady Amr, the U.S. deputy assistant secretary of state for Israel and Palestinian affairs, wrapped up a day of talks Sunday with key Israeli officials and the Office of the Quartet, which mediates Middle East peace negotiations. He is scheduled to hold similar discussions on Monday with President Mahmoud Abbas of the Palestinian Authority, which governs parts of the West Bank but lost control of Gaza in 2007.

The conflict between Israel and Hamas has ignited a wave of related violence between Arabs and Jews within Israel itself this past week. That and demonstrations across the occupied West Bank have made analysts wonder whether Palestinians are on the verge of a major uprising, the third since the late 1980s. Protests and clashes were less intense on Sunday after a major crackdown by the police in Israel and by the Israeli Army in the West Bank.

But Arabs and Jews clashed in the Negev desert in Israel’s south, in East Jerusalem and in Lod, a mixed Arab-Jewish city in central Israel. The police response to the civil unrest over the past week has mostly focused on Arabs, following attacks on synagogues that some likened to a pogrom.

On Sunday, an umbrella organization for Arab leaders in Israel appealed to the international community to help protect Palestinian citizens of Israel “from violent attacks and human rights violations by both state and private actors.” The group added, “Palestinian citizens, collectively, are afraid for their lives.”

On Sunday afternoon, a Palestinian rammed a police checkpoint, injuring several police officers in Sheikh Jarrah, a neighborhood in East Jerusalem. Seconds later, the police fatally shot the driver. Several Palestinian families face expulsion from their homes in Sheikh Jarrah in a case that has galvanized Palestinian national sentiment, setting the stage for the renewed conflict in Gaza.

The weekend’s rocket fire by Hamas and other Islamist militant groups in Gaza included a major barrage over central Israel early Sunday morning.

Most of those rockets were intercepted by the Iron Dome, an antimissile detection system partly financed by the United States. But where they hit, they brought terror on Israeli residents, particularly in towns like Sderot, close to Gaza’s perimeter.

One blast this weekend destroyed a fifth-floor apartment in Sderot, killing a 5-year-old boy, and ripped a hole in another, where Eli Botera, his wife, Gitit, and their infant daughter, Adele, were huddling in the baby’s bedroom.

“My wife was panicking and started to scream,” Mr. Botera said. “Eventually, it’s all up to God. Every individual must do what they can to protect themselves, but if it’s your destiny to die, you die.”

The deadliest attacks have been in Gaza — and chief among them was the airstrike on Ms. Abul Ouf’s home in Al-Wehda, a busy, wealthy district in Gaza City, full of shops and apartment blocks.

Ms. Abul Ouf was training to be a dentist and lived at home with her parents and siblings, relatives said. By Sunday morning, two were dead and three had been plucked injured from the rubble, relatives said. Ms. Abul Ouf’s father, a supermarket owner, was unscathed, having gone for a nighttime visit to fix a neighbor’s internet.

“Hide,” he remembered telling her in a text message.

But the message never arrived.

Mr. al-Yazji spent hours on Sunday scouring the rubble for her. Government rescuers heaved away debris, stone by stone, and when they spotted a body, Mr. al-Yazji hurried over, the rubble’s grit and sand caking his feet.

The person was still breathing. But it wasn’t Ms. Abul Ouf.

Israel’s airstrikes have also stopped all Covid-19 vaccinations and virus testing in the Palestinian enclave and raised the risk of viral contagion as civilians cram into shelters for safety, U.N. officials said.

Standing in the rubble Sunday, Mr. al-Yazji gave up hope of finding his fiancée by the midafternoon. He took a box of her dental equipment from the ruins, a small token to remember her by. Then he left with his brother for the nearby hospital where casualties from the airstrike were being taken.

After every new ambulance arrived, he rushed to its back doors to peer inside and see if Ms. Abul Ouf was lying within. Each time, he walked back disappointed.

After several hours, he went instead to the morgue. And there, lying motionless on a stand, was the body of Shaimaa Abul Ouf.

Mr. al-Yazji emerged hysterical with grief. “Be happy,” he said after identifying her body.