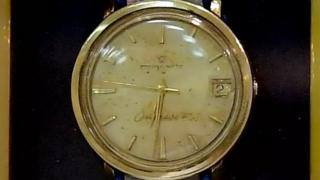 A watch belonging to one of Israel’s most famed spies who was caught and hanged in Syria has been recovered by Israel’s Mossad intelligence agency.

It was worn by Eli Cohen, an Egyptian-born Jew recruited by Mossad in the early 1960s, who infiltrated the highest echelons of the Syrian regime.

He provided Israel with Syrian state secrets, before he was found out and publicly hanged in Damascus in 1965.

Syria has refused to reveal the whereabouts of his remains.

The recovery of Cohen’s watch was announced by the Israeli prime minister’s office.

Details of when or how Israel got hold of the watch were not disclosed, other than it was returned “in a special Mossad operation”.

Mossad director Yossi Cohen said the watch was worn by Eli Cohen “until the day he was captured.

“The watch was part of Eli Cohen’s operational image and part of his fabricated Arab identity.”

The mystique of his story is such that it is oft-reported that he was even considered for the position of Syrian deputy defence minister, though this has not been backed up by evidence.

Cohen was able to obtain secret information, which he passed back to Israel. Details he gave of Syrian troops on the Golan Heights are said to have played an important part in helping Israel defeat Syria in the 1967 Middle East war.

He was unmasked by Syrian security officials in 1964, tortured and sentenced to death after a military trial. Cohen was hanged in a public square in Damascus the following year.

Israel has repeatedly asked for the repatriation of his remains but Syria has refused.

Commenting on the recovery of the watch, Israeli Prime Minister Benjamin Netanyahu said in a statement: “I commend the fighters of the Mossad for the determined and courageous operation, the sole objective of which was to return to Israel a memento from a great fighter who greatly contributed to the security of the state.”

The watch was given to Cohen’s widow, Nadia, in a private ceremony in May.

“The moment that they informed me [of the watch’s recovery] my mouth went dry and I got the chills,” she told Israeli TV.