High-level United States officials traveled recently to Syria for rare talks with the Assad government in an attempt to secure the release of American citizens held prisoner there, a high priority for the Trump administration, but there has been little apparent progress so far, officials said.

The secret U.S. mission to Damascus in August focused on Austin Tice, a freelance journalist who was seized while reporting on the Syrian civil war in 2012, and Majd Kamalmaz, a psychotherapist who was taken in 2017. The trip was first reported by The Wall Street Journal and confirmed by two U.S. officials with knowledge of American operations in the Middle East, including a senior administration official, who spoke on condition of anonymity.

The senior official cautioned that the attempt was still in its early stages, and that the U.S. government did not have any recent proof that Mr. Tice, 39, was still alive. The Syrian government has not publicly acknowledged holding either him or Mr. Kamalmaz, 62, who is diabetic and requires regular medication, according to his family and the U.S. government.

Previous contacts by the United States about prisoners held by President Bashar al-Assad’s government have fizzled out, but his regime — which would like to see economic sanctions lifted and American troops withdrawn from Syria — has much to gain, potentially, from improved relations with Washington. The Trump administration has secured the release of people held in several other countries in the Middle East, a goal of particular interest to the president.

Diplomatic relations between the two countries have been minimal since the United States closed its embassy in Damascus in 2012 and ordered the closure of the Syrian embassy in Washington in 2014. The United States has long labeled Syria, considered a pariah state by much of the world, as a sponsor of terrorism, and has imposed sanctions on the country and its officials for human rights violations before and during the war that began in 2011. 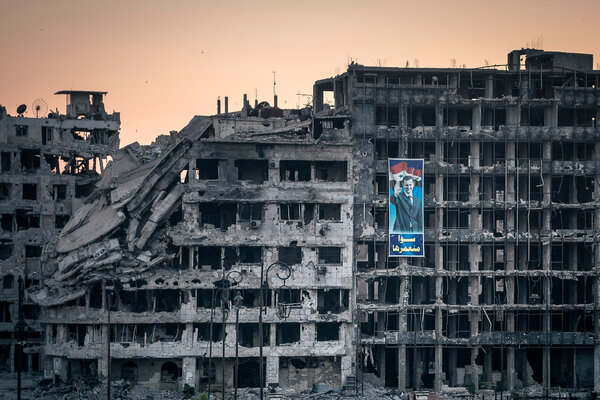 But in 2017, Mike Pompeo, then the C.I.A. director, called Mr. Mamlouk to open back-channel communications on Mr. Tice. Washington then sent an intermediary to see Mr. Mamlouk, the officials said. They met for hours and the intermediary delivered an unsigned letter from the U.S. government.

But the effort was put on hold the next year, when the Syrian government launched a chemical attack on a rebel-held area, and the United States responded with missile strikes on Syrian targets. Weeks later, French authorities issued international arrest warrants for Mr. Mamlouk and other officials, in connection with torture, killings and war crimes.

In August 2018, the C.I.A. sent a top agency official with expertise in the Middle East to meet Mr. Mamlouk in Damascus, where the official raised the case of Mr. Tice.

A year ago, Mr. Trump ordered the withdrawal of most of the American troops in Syria, in effect ceding back to Mr. Assad territory that had been captured from the Islamic State. Critics questioned why the administration had not demanded anything from Syria in return, like the release of prisoners.

Mr. Tice, a Marine Corps veteran, was attending law school at Georgetown University when he decided to cover the war in Syria, where he wrote articles for several news organizations. His family has been outspoken about maintaining interest in his case and seeking his release, and said as recently as 2018 they were confident he was still alive.

“For years we have pushed for engagement between the U.S. and Syrian governments to help bring our son safely home, so we hope recent reports are accurate,” his parents, Marc and Debra Tice, said in a statement released on Monday. “We are deeply grateful to everyone working for Austin’s safe return, and his continued absence shows there is more to be done.”

Mr. Kamalmaz, who was born in Syria and grew up in the United States, had established a mental health clinic in Lebanon for refugees from the Syrian war. He went to Syria to visit family members and was taken the day after he arrived.

Reporting was contributed by Adam Goldman and Edward Wong.

With Netanyahu Facing Indictment, Israel Braces for a Wild Election