Home » Middle East » ‘I Was Surrounded by Death’: Gaza Father Is Rescued, Emerging to Grief

GAZA CITY — Riad Ishkontana had promised his children that their building on Al Wahida Street was safe, though for Zein, his 2-year-old son, the thunder of the airstrikes spoke louder than his reassurances.

The Israelis had never bombed the neighborhood before, he told them. Theirs was a comfortable, tranquil area by Gaza City standards, full of professionals and shops, nothing military. The explosions were still far away. To soothe them all, he started calling home “the house of safety.”

Mr. Ishkontana, 42, tried to believe it, too, though around them the death toll was climbing — not by inches, but by leaps, by housefuls, by families.

He was still telling the children about their house of safety all the way up until after midnight early Sunday morning, when he and his wife were watching more plumes of gray smoke rising from Gaza on TV. She went to put the five children to bed. For all his attempts at comforting them, the family felt more secure sleeping all together in the boys’ room in the middle of the third-floor apartment.

Then a flash of bright light, and the building swayed. He said he rushed toward the boys’ room. Boom. The last thing he saw before the floor gave way beneath him and the walls fell on him, then a concrete pillar, then the roof, was his wife pulling at the mattress where she had already tucked in three of their children, trying to drag it out.

“My kids!” she was screaming, but the doorway was too narrow. “My kids!”

By Wednesday, Israeli air attacks had killed 227 Palestinians in Gaza, striking at Hamas militants who were firing rockets at Israel from the coastal strip, but in the process further compounding the agony of what, for Gaza’s two million residents, is already a kind of crumbling open-air prison. Its electricity, water, sanitation and health care systems, rarely stable before the airstrikes, are now in shambles. With its borders shut by Israel and Egypt, there is nowhere for its people to flee.

Gazans and the Israeli military said Hamas rocket fire and Israeli airstrikes had slowed on Wednesday as the two sides, especially Israel, faced increasing diplomatic pressure to lay down their weapons. But no cease-fire was announced, and the airstrikes continued.

The most notable, if still measured, public statement from a foreign leader came from President Biden, who told Prime Minister Benjamin Netanyahu of Israel that he “expected a significant de-escalation today on the path to a cease-fire,” the White House principal deputy press secretary said. European governments were also pushing for an immediate cease-fire, while international parties, including Egypt, attempted to mediate.

Hamas rockets have also kept killing people in Israel — 13 in all since the start on May 10. Among the dead were three foreign workers, who make up most of Israel’s agricultural work force but have long endured squalid living conditions there. After two Thai employees of a packaging plant near the Gaza border were killed on Tuesday, a local official told The Times of Israel newspaper that the agricultural community where they worked did not have an adequate shelter against rockets.

Israel says its American-funded Iron Dome defense system has intercepted about 90 percent of the rockets. 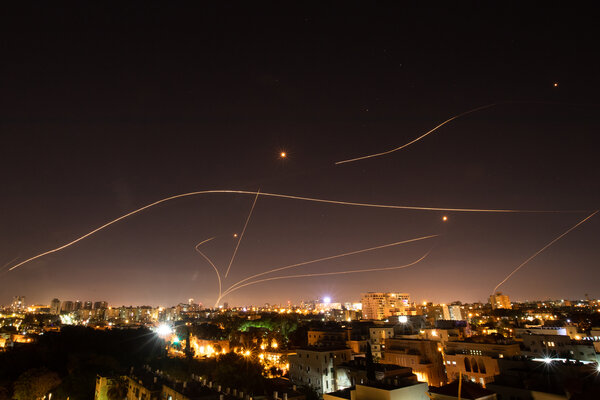 In Gaza, there is neither Iron Dome nor dedicated shelter, only the strip’s United Nations-run schools, whose classrooms are overflowing with 47,000 evacuees. The United Nations said another 29,000 people have been forced to leave their homes and shelter with other families, for a total of about 75,000 people displaced in Gaza by the Israeli military campaign.

In the jagged blackness where he was buried under what had been his apartment, Mr. Ishkontana said, he could hear Zein, his 2-year-old, moving around and crying, “Baba! Baba!” Dana, 8, was also calling to her father for help, her voice trembling.

Mr. Ishkontana was pinned in place. The walls, pillar and roof had fallen on his chest, back, hand and right leg, breaking two ribs and slicing off a finger. He tried shouting for help, but he barely had the strength.

“I was surrounded by death and the end of life,” he said. “I felt like my life was over. I was waiting for death at any moment.”

After a few minutes, Zein went quiet. So did Dana.

Then there was a noise, Mr. Ishkontana recalled. A whir of machinery, faint but unmistakable. A bulldozer?

“Who’s alive?” he heard a man calling. “Is anyone alive?”

Hope crashed over him, carrying with it the thought: I’m going to live.

“Oh God!” he started shouting, alternating prayers with calls to the rescuers. One of them told him to keep breathing while they dug down toward him through the debris, gray but for the occasional splotch of floral couch or purple dishrag or bag of bread.

The rescuer asked Mr. Ishkontana if there were any signs of life around him.

When Mr. Ishkontana saw a small hole open up above him, he stuck two fingers through it to let them know they had found him. Up above, people were chanting, “God is great! God is great!” He raised the two fingers in a weak victory sign.

His feelings, he said in an interview on Wednesday at a relative’s house, where visitors had come to offer condolences after he was discharged from a hospital, were a jumble: “power, mercy, strength, survival.”

“A new life appeared on the horizon when they moved the rubble,” said Mr. Ishkontana, who, after losing his job as a waiter at a Thai restaurant during the coronavirus pandemic, had turned to odd jobs. “Even though I was thinking at the same time that because I lost my family, my whole life was gone.”

At Shifa Hospital several hours later, someone gave him the news: One of his daughters, 7-year-old Suzy, had been found alive under the rubble a few hours after him, only lightly wounded in the face. In joy, then terror, he asked about the rest of his family: his wife, Abeer, 28; and Dana, 8; Lana, 6; Yahya, 5; and baby Zein.

The man said rescuers were still hoping to save them from the rubble.

But he knew that the man was trying to cushion the blow, Mr. Ishkontana said. He knew they were all gone.