Home » Middle East » ‘If There Were No Hashish Here, You Wouldn’t See a Single House’

It fills the fields that surround the village and lines nearby roads where the army operates checkpoints. It sprouts in the weedy patches between homes and is mixed with other colorful blooms in flower beds.

There is a cannabis crop near the mosque, and down the road from a giant yellow flag for Hezbollah, the militant group and political party whose leaders forbid its use on religious grounds.

Jamal Chraif, the mukhtar, or village chief, of Yamouneh, praised cannabis as “a blessed shrub” for what he called its many beneficial properties and the ease of its cultivation.

“There is something sacred about it,” he said. “God makes it grow.”

But for the first time since he began growing cannabis two decades ago, Mr. Chraif planted none this year because a chain of events have erased most of the profits that used to come with the village’s main product: the hashish extracted from the plant. Instead, he is focusing on apples.

He blames the woes afflicting the village, and Lebanon in general, on cosmic forces, including aliens, the Antichrist and the Bermuda Triangle — an explanation that could have been inspired by the drug itself.

The reality is more terrestrial. The Lebanese pound has lost 80 percent of its value against the United States dollar since last fall, and farmers have taken the hit. The costs of imported fuel and fertilizer needed to grow the crop have soared, while the Lebanese pounds that growers earn by selling their hash are worth less and less. 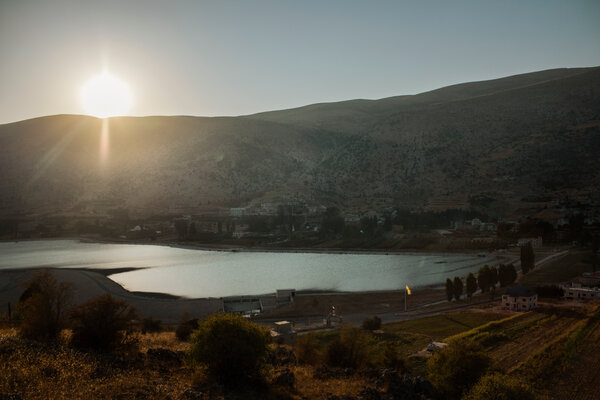 Lebanon’s financial crisis has also undermined the drug’s domestic market, and the war in Syria has snarled smuggling routes, making it harder for middlemen to reach foreign markets.

This has forced painful choices in Yamouneh, a picturesque hamlet in a neglected pocket of Lebanon where drugs, poverty, religion and stunning natural beauty converge in unexpected ways.

For as long as anyone alive can remember, the yearly cycle in Yamouneh has been driven by the planting, weeding and harvesting of cannabis.

The hashish extracted from the plant and sold to smugglers who spirit it out of the country has done more than any other crop to help the village residents edge out of abject poverty. It has provided reliable income not offered by their legal, more fickle crops, like apples and potatoes, and funded home expansions, truck purchases and children’s educations.

Now, the drug earns so little that some growers in Yamouneh doubt it is still worth producing.

The production here and in other communities made Lebanon the world’s third largest hashish supplier, after Morocco and Afghanistan, according to the United Nations.

Although hashish, a cannabis concentrate with high levels of THC, is illegal to produce, possess and sell in Lebanon, the government earlier this year passed a law legalizing some cannabis cultivation for medicinal purposes. The law has yet to be implemented, and the cannabis grown in Yamouneh remains illegal because of its high THC content.

Now Lebanon’s economic crisis threatens to do what years of army raids and government efforts to combat the drug never did: reduce hashish production.

While fondly recalling the days when a kilogram of hashish easily fetched between $500 and $800 — and the few years when the price shot above $1,000 — the farmers fear the earnings for this year’s product could fall to around $100 per kilo, or about $45 a pound.

“If the situation stays like this, we won’t plant,” one longtime grower said, speaking on condition of anonymity like others to avoid legal jeopardy. “Hope has been cut off.”

But the full effects of hashish’s declining appeal as a cash crop are yet to be seen in the village. Even as some farmers are abandoning it, others are still clinging on.

During a recent visit, scores of Syrian refugees swung scythes to fell waist-high cannabis plants outside town, then piled the cut stalks into large bales. Most were minors, some as young as 9, who said they welcomed the work since fears of the coronavirus had shut their schools.

The landowner looked on, occasionally raising a shotgun from his shoulder to fire at birds overhead. He had grown up with hashish and said this was the worst year he had ever seen. The costs for imported supplies — fuel, fertilizer and plastic sheeting to bale the harvest — ate into his profits, but tradition kept him growing.

“We were born into this,” he said. “If there were no hashish here, you wouldn’t see a single house in the village.”

The 5,000 or so citizens of Yamouneh, at the base of a mountain in the Bekaa Valley, are Shiite Muslims. Nearly all share the same last name, Chraif. About 1,200 Syrians have settled in the area to look for work and escape the war across the border.

Talal Chraif, the mayor and elected head of the village council — and a rare resident who says he has never grown cannabis — attributed its prominence to chronic unemployment and the plant’s suitability for the local environment.

“No sickness afflicts it. The bugs don’t attack it. The lack of water doesn’t affect it,” Mr. Chraif said. “There is a guarantee with the crop, and that is why the farmers went in that direction.”

He recalled the old days when the Lebanese government, with funding from the United States, tried to snuff out cannabis, dispatching soldiers to torch fields and sparking clashes with armed growers. But those efforts yielded to official neglect about a decade ago.

“It reached a state where they realized, because of the poverty, ‘Let’s leave those people alone and act like we don’t see them,’” Mr. Chraif said.

Efforts to replace cannabis with sunflowers and saffron never took off.

Two years ago, as Lebanon’s finances slid toward the abyss, McKinsey, the consulting giant, generated a national buzz by suggesting that legal cannabis cultivation could earn the country big profits.

“The quality we have is one of the best in the world,” Raed Khoury, the economy minister at the time, said, suggesting it could spawn a $1 billion industry.

Lebanon did legalize cannabis in February of this year, the first Arab country to do so. But the government has made no progress since on implementing the law.

And since hashish is still illegal, and the government would be able to tax legal strains of cannabis, Yamouneh’s farmers, long used to operating outside the law, opposed legalization.

The many two- and three-story villas and pricey SUVs out front bear testament to the cash that hashish has brought to the village, but residents say the big money has always gone to the smugglers.

As he was receiving struggling farmers outside his home, the mayor said he expected hashish production to drop by as much as half this year as growers struggle to make ends meet.

“They are asking, ‘Why should I grow it if I am going to lose?’” he said. “They smoke it themselves to forget their worries.”

Fire breaks out at Iranian power plant, latest in series of incidents