BEIRUT, Lebanon — Joseph R. Biden Jr.’s arrival in the White House may signal the start of a less congenial American relationship with Saudi Arabia, but the kingdom could point to recent progress on a number of issues that have caused longstanding friction with the United States.

Long one of the world’s most prodigious executioners, Saudi Arabia announced on Monday that executions declined by 85 percent in 2020 because of legal reforms. Groups that have chronicled incitement against non-Muslims in Saudi textbooks say that the most offensive examples have been excised. And the sentences for two high-profile Saudis widely seen as prosecuted for their politics appear to have been calibrated to limit their time in prison as Mr. Biden takes charge of the kingdom’s most important ally.

Human rights campaigners have applauded the changes while emphasizing the many places where the kingdom still fails to ensure basic rights.

“There have been a lot of good reforms to be excited about, but the total absence of any kind of free expression and the continued political crackdown have mitigated Saudi Arabia getting more credit for these changes,” said Adam Coogle, deputy director for the Middle East for Human Rights Watch.

Most of the changes do not appear to be driven by a Saudi effort to curry favor with the new administration in Washington, but are the products of reforms set in motion by the kingdom’s de facto ruler, Crown Prince Mohammed bin Salman. Since his father ascended the throne in 2015, Prince Mohammed has become the kingdom’s driving force, pushing to diversify the economy away from oil and roll back strict social restrictions.

But along the way, he has developed a reputation for thuggishness.

Prince Mohammed dispatched Saudi forces to Yemen, where they bombed civilians, and ordered waves of arrests of clerics, activists and other members of the royal family. He is also widely thought to have dispatched the Saudi agents who killed and dismembered the dissident Saudi writer Jamal Khashoggi in Istanbul in 2018, although he has denied any prior knowledge of the plot. 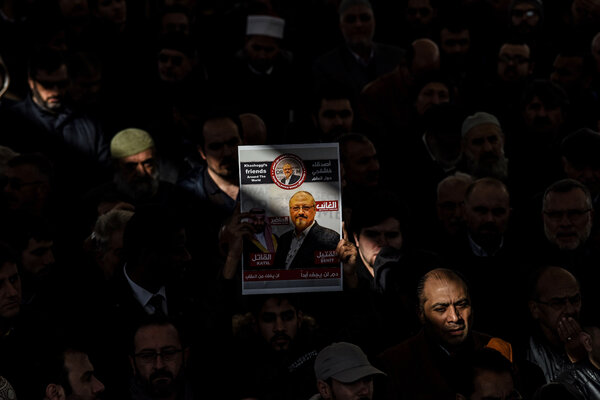 Prince Mohammed built a strong relationship with President Trump and his son-in-law and senior adviser, Jared Kushner, who often protected him from censure by other parts of the U.S. government angered by his actions.

Mr. Biden has promised to take a different approach to the kingdom. During the presidential campaign, he labeled it a “pariah,” vowed to stand up for human rights and called for a broad reassessment of the American-Saudi relationship.

Saudi officials have not publicly offered any steps to address the Biden administration’s concerns. Saudi forces continue to fight in Yemen, and the Saudi trial of the team that killed Mr. Khashoggi ended months ago, with no high-level officials held to account.

But recent changes in the kingdom may at least ease some long-term sources of American irritation early in Mr. Biden’s term.

On Monday, the Saudi Human Rights Commission announced that the kingdom had executed 27 people in 2020, a fraction of the 184 executions that human rights groups recorded in 2019, when the country ranked behind only China and Iran. And the kingdom’s tradition of having hooded swordsmen cut off people’s heads, often in public squares, has long rankled even its closest Western partners.

In a statement posted on Twitter, the Saudi commission attributed much of the drop to a moratorium on the death penalty for drug-related offenses, which made up much of the total in past years.

“The commission welcomes this news as a sign that the kingdom and its justice system are focusing more on rehabilitation and prevention than solely on punishment,” Awwad Alawwad, the commission’s head, said in the statement.

Mr. Coogle of Human Rights Watch, which opposes the death penalty, welcomed the announced moratorium, but said it was not clear whether it had been enshrined in law. New regulations have not been published, and the statement by the Saudi commission appeared only on its English-language account, not in Arabic.

Even if fewer people are being executed, Mr. Coogle said, the kingdom’s criminal justice system remains “infamously unfair and biased.”

Over the past year, Saudi Arabia has made significant progress addressing an issue that has long undermined relations with the United States: content deemed hateful to non-Muslims in Saudi school books.

U.S. officials have complained about Saudi textbooks — which celebrated jihad and martyrdom and portrayed Jews and Christians as enemies of the one true faith — since the terrorist attacks of Sept. 11, 2001, 15 of whose 19 perpetrators were Saudis.

While the textbooks had been frequently modified over the years, much of the contested material had remained.

Now, much of it is gone. A recent review of Saudi textbooks for the 2020-21 school year found that most of the material deemed anti-Semitic had been taken out, as had text praising jihad and saying gays and lesbians should be punished with death.

The review, by IMPACT-se, a research organization based in Tel Aviv, noted many changes since its previous report last year. These included the removal of a chapter called “The Zionist Danger” and a saying attributed to the Prophet Muhammad about Muslims killing all Jews at the end of the world.

Most references to jihad, including one that called it the “climax of Islam,” were also removed.

The texts still contained a story about “Jewish wrongdoers” who are described as monkeys and say that “hellfire for all eternity” awaits polytheists who do no repent, the review found.

But Marcus Sheff, the group’s chief executive, said in an interview that the Saudis were moving in the right direction, and faster than they had before. “This curriculum is not free from of hate, not free of incitement,” he said, “but Saudi Arabia has clearly made a concerted effort, an institutional effort, to modernize the curriculum.”

The kingdom has been widely criticized for jailing and prosecuting prominent Saudis on charges that human rights groups have denounced as politically motivated.

While the kingdom did not overturn any convictions in the run-up to the Biden administration, the sentences it has given two prominent Saudis in cases that U.S. officials have criticized did appear to be aimed at keeping them out of prison while Mr. Biden is in the White House.

Last week, an appeals court upheld the conviction of Walid Fitaihi, a Saudi-American doctor, on charges that included obtaining American citizenship without permission and criticizing other Arab states on Twitter. But the court reduced his sentence to three years and two months, from six years.

Mr. Fitaihi had already served half the new sentence, and the rest was suspended, meaning he will not have to return to prison, although he is barred from leaving Saudi Arabia for 38 months.

One of Saudi Arabia’s best-known prisoners, Loujain al-Hathloul, a women’s rights campaigner, was sentenced last month to five years and eight months in prison on charges that included sharing information with foreign diplomats and journalists and trying to change the Saudi political system.

But two years of her sentence were suspended and she got credit for time served, meaning that she could be released next month, after which Saudi officials would no longer need to explain why such a prominent activist is behind bars.

Ms. al-Hathloul has appealed the sentence, as well as the court’s dismissal of her allegations that she was tortured by Saudi officials after her arrest in 2018.

Working towards food sovereignty in Palestine

Palestinians congratulate Biden, indicate end to boycott of US