RAMALLAH, West Bank — Hundreds of thousands of Palestinian citizens of Israel stopped work for the day on Tuesday, as did other Palestinians across the occupied West Bank and in Gaza, protesting violence against Arab Israelis, the unfolding Israeli military campaign targeting Hamas militants in Gaza and the looming eviction of several families from their homes in East Jerusalem.

Streets were deserted in Arab areas across both Israel and the occupied territories, as shopkeepers shuttered stores along the waterfront in Jaffa, in central Israel; the steep roads of Umm el-Fahm, an Arab town in northern Israel; and West Bank cities such as Hebron, Jenin, Nablus and Ramallah.

Demonstrators gathered instead in central squares, waving Palestinian flags, listening to speeches and chanting against Israeli policies. Outside Ramallah, a group of Palestinians who had gathered separately from the protesters set fires on a major thoroughfare and later exchanged gunfire with Israeli soldiers, officials said.

Since hundreds of thousands of Palestinians fled or were expelled from their homes in 1948, they have been divided not only by geography, but also by lived experience.

They were scattered across Gaza, the West Bank and the wider Middle East, as well as the state of Israel itself. Some struggled under differing forms of military occupation, while others were given Israeli citizenship — diluting their common identity.

But on Tuesday, they came together in a general strike to protest their shared treatment by Israel, in what many Palestinians described as a rare show of political unity.

Mustafa Barghouti, an independent politician who attended a rally in central Ramallah on Tuesday morning, said the protests constituted “a very significant day.”

“It reflects how Palestinians now have a unified struggle against the same system of apartheid,” he added. 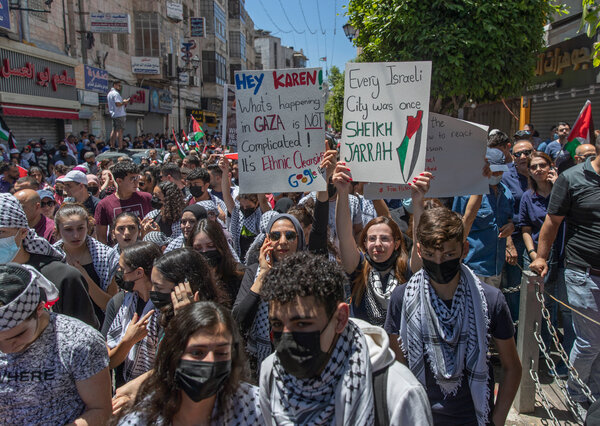 Israel fiercely rejects the Palestinians’ longstanding accusations of apartheid, a claim now taken up by a small but growing number of rights watchdogs, including Human Rights Watch last month.

Israeli officials say the occupation of the West Bank is a temporary measure until a peace agreement is achieved. And the blockade of Gaza, they say, is a security measure to prevent Hamas, the Islamist militant group that controls Gaza and opposes Israel’s existence, from acquiring weapons.

They also highlight how Arab citizens of Israel have the right to vote and elect lawmakers, have representation in Israel’s Parliament and often rise to become judges and senior civil servants.

Mark Regev, a senior adviser to the prime minister, told The New York Times last month: “To allege that Israeli policies are motivated by racism is both baseless and outrageous, and belittles the very real security threats posed by Palestinian terrorists to Israeli civilians.”

But many Palestinians on either side of the boundary between Israel and the occupied territories say they are the victims of the same system of oppression — one that operates with varying degrees of intensity, and offers Arabs varying degrees of freedom, but ultimately seeks to assert Jewish supremacy wherever that system is in force.

Some did not participate in the strike — including health workers in northern Israel, who felt they had a moral need to keep working, and the Arab residents of Abu Ghosh, a town west of Jerusalem known for its good relations between Arabs and Jews.

Other Palestinians simply saw the strike as an effort to show solidarity with Gaza, and to strengthen calls for an independent Palestinian state.

But for some, the strike, and the unity it implied, was a sign of a new era for the Palestinian cause.

“I don’t know what that looks like,” she said. But, she added, “I think this is the new path.”

Ms. Tinah and the other protesters later marched to the edge of Ramallah, chanting for an end to the occupation.

But the day ended in sadness and violence. A separate group of demonstrators gathered outside the city, close to an Israeli Army base and a Jewish settlement, and blocked a major thoroughfare with burning tires. Clashes soon broke out between the group and soldiers stationed at the base, shortly before the larger group of protesters arrived on the scene.

In the mayhem that followed, video showed soldiers and some demonstrators exchanging live fire.

By nightfall, three Palestinians had been fatally shot and 72 injured, Palestinian officials said. Two Israeli soldiers were lightly injured, according to the Israeli Army.

Turkey, US link up to form border 'safe zone'