Iran said on Sunday that within hours it would breach the limits on uranium enrichment set four years ago in an accord with the United States and other international powers that was designed to keep Tehran from producing a nuclear weapon. The latest move inches Iran closer to where it was before the accord: on the path to being able to produce an atomic bomb.

In recent weeks, Tehran has been making deliberate but provocative violations of the accord, as part of a carefully calibrated campaign to pressure the West into eliminating sanctions that have slashed the country’s oil exports and crippled its economy.

Last week, Iranian officials broke through similar limits on how much nuclear fuel the country could stockpile.

Speaking at a news conference on Sunday in Tehran, the deputy foreign minister, Abbas Araghchi, said Iran would take additional steps over the limits of the accord in 60-day intervals unless international powers provide sanctions relief as spelled out in the deal. President Trump withdrew the United States from the accord last year.

But for Iran’s president, Hassan Rouhani, who signaled in May that he would order the country’s engineers to cross both thresholds if Europe did not compensate Iran for American sanctions, the breach of the enrichment limit would be a watershed. He is betting that the United States will back away from crushing sanctions or that he can split European nations from the Trump administration, which the Europeans blame for setting off the crisis.

If he is wrong, the prospect of military confrontation lurks over each escalation.

“It is a back-to-the-future moment,” said Sanam Vakil, who studies Iran at Chatham House, a research institute in London. It has revived a vexing question that policymakers have grappled with for more than a decade: Is there a permanent way to stop Iran from developing the capability to build a nuclear weapon? 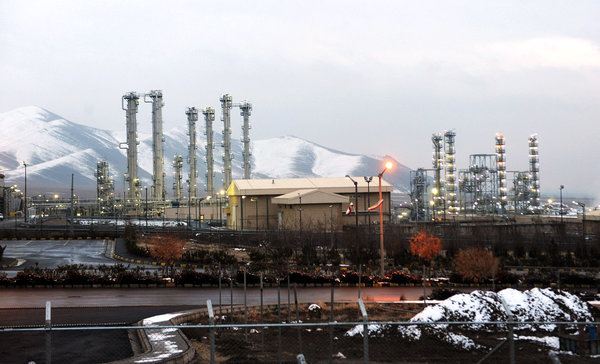 In a phone conversation on Saturday seeking to head off a confrontation, President Emmanuel Macron of France asked Mr. Rouhani to explore by July 15 whether a new negotiation was possible. Mr. Rouhani agreed, according to news reports, but said that “lifting all sanctions can be the beginning of a move between Iran and the six major powers.”

So far, Mr. Trump and his top aides have vowed to continue using “maximum pressure” to force Iran to return to the negotiating table and to accept more stringent restrictions. But some of those who had negotiated the last deal say that reaching another one may now be much harder.

The Trump administration “has discredited the very concept of negotiations, and it has strengthened the hand of those inside Iran who would argue that it is no use talking to the Americans because you can never trust them,” said Rob Malley, a former National Security Council official who helped negotiate the 2015 accord.

“We have already gone through a period of sanctions, negotiations and a deal, and this time it will be harder because the distrust is even greater than it was,” added Mr. Malley, who is now president of the International Crisis Group, an independent organization that tries to defuse international conflict.

For a year after Mr. Trump withdrew the United States from what he called a “terrible” deal negotiated by his predecessor, Iran stayed within the accord’s limits. It pressed Britain, France and Germany to make good on their promises to compensate the country for oil revenues and other losses resulting from American sanctions.

There were many meetings on the design of a barter system that might allow Iran to swap oil for other goods, evading American sanctions. But progress was slow; as of last week, not a single barter transaction has been completed, and European officials said the system would never fully compensate for billions of dollars in lost oil sales.

Two months ago, when the United States accelerated the sanctions and moved to cut Iran’s oil revenues to near zero, Tehran decided to begin step-by-step violations of the accord, saying the United States had taken the first move to dissolve it.

The steps Tehran has taken are all easily reversible. Yet the move Iran says it will take — to increase enrichment levels beyond the 3.67 percent purity that is the ceiling under the deal — is the most threatening.

Iran has not said how far beyond the enrichment limit it plans to go. Historically, although it has never been known to have approached the 90-percent enrichment required for weapons-grade material, its move raises the prospect of a race toward that goal.

Even a move to 20 percent enrichment — the top level it hit before the deal was reached, in what Iran called an effort to make medical isotopes at a small reactor that the United States gave to Tehran more than 40 years ago — would put it within months of being able to produce weapons-grade fuel.

At first glance, Iran is much further away from that goal than it was before it agreed to the 2015 deal, which set its nuclear efforts back by a matter of years.

Under the deal, Iran exported 98 percent of its stockpile of low-enriched uranium, chiefly to Russia, leaving it with a minimal amount. It dismantled more than two-thirds of the 19,000 centrifuges it was operating. It poured cement into the core of its Arak plutonium reactor, preventing it from taking another path to a bomb. (In recent days, however, Iranian leaders have threatened to reverse those steps.)

Perhaps most important, Iran agreed to comprehensive inspections by international monitors, who continue their work. They report relatively few troubles.

Mark Dubowitz, the chief executive of the Foundation for the Defense of Democracies who is among the most vociferous critics of the 2015 deal, argued that despite the accord’s shortcomings, in some ways United States policy toward Iran was now working out better than anyone could have planned.

Although he faulted the 2015 deal for weaknesses such as its planned sunset over the next five to 10 years, he conceded that in the short term the Obama administration had persuaded Iran to dismantle so much of its nuclear infrastructure that it has drastically prolonged the amount of time Iran would need to develop a bomb.

That has reduced Iran’s leverage — and helps explain Mr. Rouhani’s drive to break out of some of the accord’s restrictions.

But because the Trump administration is hammering Iran with economic sanctions that are more painful than ever before, the country does not have the kind of money it once did to pour into the nuclear effort or other military activities.

Crude oil exports have reportedly fallen to about 300,000 barrels a day, compared with about a million a day at the time Iran agreed to the 2015 deal. And the result has brought on a severe crisis in the Iranian economy.

“If you were a Martian who landed on the Washington Mall yesterday and you were given a briefing on Iran policy, you would think, wow, those Americans are really smart when they work together,” Mr. Dubowitz said. “The net result is that Iran is a lot worse off today in terms of nuclear infrastructure and worse off in its economic pain.”

Yet paradoxically, some analysts and former officials argue, the experience of that deal falling apart may also increase the challenge of once again thwarting Iran’s nuclear progress.

Aided in part by sanctions relief provided under the deal, Tehran has fortified itself. Its nuclear facilities, especially a centrifuge center at Natanz, are surrounded by anti-aircraft guns. Its missile program has far more reach than it did previously, in part because a side agreement, negotiated at the time of the 2015 deal, weakened the wording on United Nations restrictions on Iran’s missile program.

And the country’s reach is greater: It has helped allied militias build up and dig in around the region, including in Lebanon, Syria, Iraq and Yemen, and those militias may in turn help Iran retaliate against the United States.

Its cybercorps, built after an American-Israeli cyberattack on the Natanz nuclear enrichment facility in the years before the 2015 accord, is capable of hitting American infrastructure — and has proved it with attacks on American banks.

Because of the stronger position of Iranian allies around the region and the significant advances in Iran’s conventional missile program, “repercussion across the region could be far bigger” from the escalating conflict with the United States, said Ellie Geranmayeh, who studies Iran at the European Council on Foreign Relations.

Mr. Trump, often caught between his desire to flex muscles and his aversion to another Middle East war, must now decide whether to negotiate, lower the sanctions pressure or consider military options.

For now, the Iranians appear to be speaking primarily to the Europeans. The European Union, Britain, France and Germany all signed the 2015 deal and, in defiance of the Trump administration, continue to support it.

Persuading the Europeans to join another American-led campaign to pressure Iran “is going to be a much harder sell,” Ms. Geranmayeh said. “The Europeans are pointing the blame for the failure of this agreement directly at the U.S. rather than Iran.”

At the same time, if the Europeans conclude that Iran has gone too far beyond the deal, they could ask the United Nations Security Council to reimpose “snapback” sanctions — swift and sweeping penalties spelled out under the 2015 deal that would add to Iran’s pain.

Iran appears to be emphasizing a desire to return to compliance if the United States does as well, in a bet that it can persuade the Europeans to drag their feet about imposing any penalties. But each step Iran takes makes that bet more risky.

“At some point the Europeans, too, will start wanting to show the Iranians that there is a price to be paid for their behavior, just as Iranians are now showing the U.S.,” Mr. Malley said. “If there is a cycle that emerges, then sooner or later you are heading to the unraveling of the deal.”

Boeing plane bound for Ukraine with 180 aboard crashes in Iran