Foreign ministry dismisses as ‘meaningless’ allegations by US top diplomat that Tehran is behind Houthi-claimed attacks. 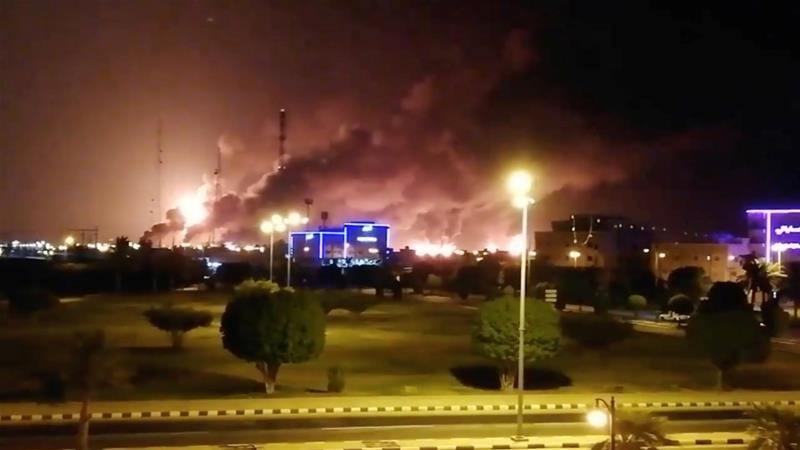 Iran has dismissed accusations by the United States that Tehran was behind drone attacks that set ablaze two major Saudi Aramco oil installations, as Saudi Arabia raced to restore operations at the damaged facilities.

Yemen’s Houthi rebels claimed responsibility for Saturday’s assault on Abqaiq – the world’s largest oil processing plant – and the Khurais oilfield. The pre-dawn strikes knocked out more than half of crude output from the world’s top exporter.

US Secretary of State Mike Pompeo blamed Iran, saying it “has now launched an unprecedented attack on the world’s energy supply”.

“There is no evidence the attacks came from Yemen,” Pompeo said on Twitter, referring to the Houthis’ claim of responsibility. He did not provide any evidence to support his claim.

In response, Iran’s foreign ministry on Sunday called the US allegations “meaningless” and said they were meant to justify actions against Iran.

“Such remarks … are more like plotting by intelligence and secret organisations to damage the reputation of a country and create a framework for future actions,” spokesman Abbas Mousavi said.

Tensions between the US and Iran have escalated since May last year, when Washington unilaterally pulled out of a 2015 multinational deal that promised Tehran relief from sanctions in return for curbs on its nuclear programme.

Since its withdrawal, the US  has slapped crippling sanctions on Iran as part of a campaign of “maximum pressure”.

“US and its clients are stuck in Yemen because of illusion that weapon superiority will lead to military victory,” he added, calling for talks to end the war in the Arab world’s most impoverished country.

With support from the US, Saudi Arabia has been leading since March 2015 a military coalition fighting the Houthis in support of Yemen’s internationally recognised government.

The war has killed tens of thousands of people, thrust millions to the brink of famine and spawned the world’s most devastating humanitarian crisis.

Human rights groups have criticised the Saudi-led coalition for targeting civilians at hospitals, schools and markets, while also condemning Western countries for providing it with arms. In April, US President Donald Trump vetoed a bipartisan resolution that would have forced the US military to end its support to the coalition forces.

In a phone call on Saturday, Trump told Saudi Crown Prince Mohammed bin Salman that Washington was ready to work with the kingdom to guarantee its security, according to a statement by the White House.

MBS, Saudi Arabia’s de facto ruler, told Trump the kingdom was “willing and able” to respond to the drone attacks.

Saudi Arabia has long accused Iran of supplying the Houthis with missiles and drones, a charge both Iran and the group reject – Iran says it supports the rebels diplomatically and politically but denies providing them with any military aid.

“This is being seen by many here as an attempt yet again to try to pressure Iran to have this meeting,” Al Jazeera’s Dorsa Jabbari, reporting from Tehran, said.

“By accusing Iran without any evidence of being behind such an attack, analysts say the US government is trying to force Iran’s hands to the negotiating table – but the Iranians have said over and over again that … under the current conditions – the US withdrawal from the nuclear deal and the imposition of a series of sanctions – they will not have that dialogue.”

Separately, a commander with Iran’s elite Islamic Revolutionary Guard Corps said on Sunday that US bases and aircraft carriers around Iran were within range of the country’s missiles.

“Everybody should know that all American bases and their aircraft carriers in a distance of up to 2,000 kilometres (1,243 miles) around Iran are within the range of our missiles,” Amirali Hajizadeh was quoted as saying by the semi-official Tasnim news agency.

“Iran has always been ready for a “full-fledged” war”, he added, without mentioning Saturday’s attacks in Saudi Arabia.

The Houthis have hit Saudi Arabia’s energy infrastructure before but Saturday’s assault was of a different order, abruptly halting 5.7 million barrels per day or about six percent of the world’s oil supply.

Still, the full extent of the damage was not clear, nor the type of weapons used, and reporters were kept away from the damaged facilities amid increased security.

The drone attacks came as Saudi Arabia steps up preparations for a much-anticipated initial public offering of Aramco, the world’s most profitable company.

The state-owned oil giant said it had extinguished the blazes, which caused no casualties, and was working to restore production levels.

Saudi Arabia’s newly appointed Energy Minister Prince Abdulaziz bin Salman said part of the drop would be offset by drawing on vast storage facilities designed to be tapped in times of crisis.

Riyadh has built five giant underground storage facilities across the country that can hold tens of millions of barrels of various refined petroleum products.