President Rouhani says Iran’s nuclear industry is advancing, but vows to stick with the 2015 deal with world powers. 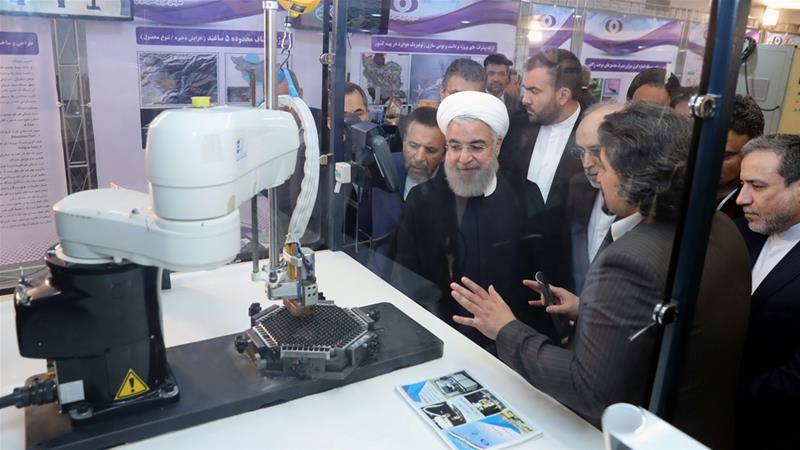 President Hassan Rouhani has declared that Iran’s nuclear industry is advancing at a faster pace, as one of his senior cabinet officials warned the country could ramp its uranium enrichment to 20 percent on short notice, if the United States withdraws from the nuclear agreement.

“I want to clearly say to the Iranian nation that our nuclear industry is moving faster than before with more energy, accuracy and more exact calculation,” the Iranian leader declared on Monday in a speech in Tehran.

Rouhani was quoted by Mehr news agency as saying that Iran needs “both hard and soft power” while pursuing “constructive engagement” with the world.

At the same time, Rouhani said his country remains committed to the nuclear deal it signed with world powers, and will not be the first to violate the pact.

Without mentioning the US, he said other parties to the deal are “instigating Iran” to break its commitment to the agreement.

Under the 2015 agreement, Iran promised to scale back its nuclear enrichment and give up its pursuit of nuclear weapons. But it is still allowed to develop nuclear technology for civilian purposes, including energy production and scientific research.

Iran’s state news agency IRNA reported that a total of 83 nuclear technology-related achievements were unveiled during the event. 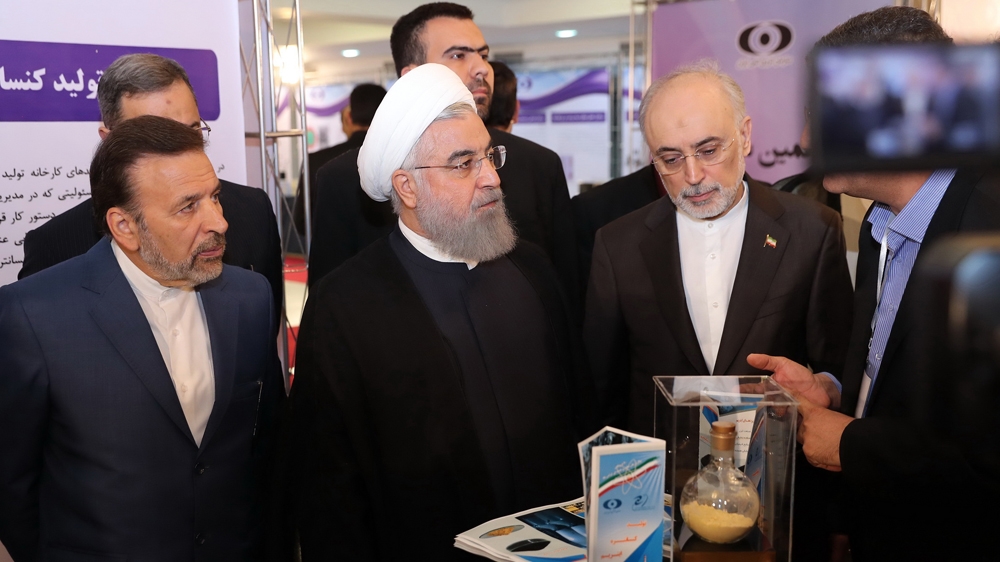 US threat of withdrawal

“The achievements unveiled today sent a clear message to some of our friends who speak carelessly,” said Rouhani, who was accompanied by his nuclear chief, Ali Akbar Salehi at the event.

On Sunday, Salehi was quoted as saying that Tehran needs only four days to ramp up its uranium enrichment at the Fordow nuclear plant, if the US withdraws from the deal. Fordow is a facility south of the holy city of Qom.

“If we receive an order from the establishment’s senior officials to resume uranium enrichment to 20 percent, we only need four days to ramp up 20 percent enrichment at Fordow Fuel Enrichment Plant,” he said.

On Monday, Behrouz Kamalvandi, a spokesman of the nuclear agency, said Salehi wanted to clarify that enrichment could be done within “two days”.

Enriching uranium to 20 percent is considered above the requirement for nuclear energy production, but still well below the 80 to 90 percent enrichment required for a nuclear weapon.

Previous analysis by the Bulletin of the Atomic Scientists concluded enriching uranium at 20 percent is “likely intended” to gain political leverage, rather than to “leap toward a nuclear weapons capability”.

Salehi said throughout the negotiation of the nuclear deal, Iran considered several scenarios, including the possibility the other parties violate the deal.

He said “preparations have already been made” without giving more details.

“Our ability for reversal in other areas will be far greater than before,” he said. “We are hoping that there will be no need for that, but if there is, it will be a scientific challenge.”

US President Donald Trump has repeatedly threatened to withdraw from the nuclear deal.

In January, Trump announced he is waiving the US sanctions against Iran for the “last time”. He said, if his demands are not met within 120 days, the US will withdraw from the deal.

The deadline is on May 12, although he hinted that the US could cut loose before that date if he sees no progress in negotiations.

U.S. Withdrawal From Syria Gathers Speed, Amid Accusations of Betrayal