First round held in February saw record-low turnout and resulted in Iran’s most conservative parliament. 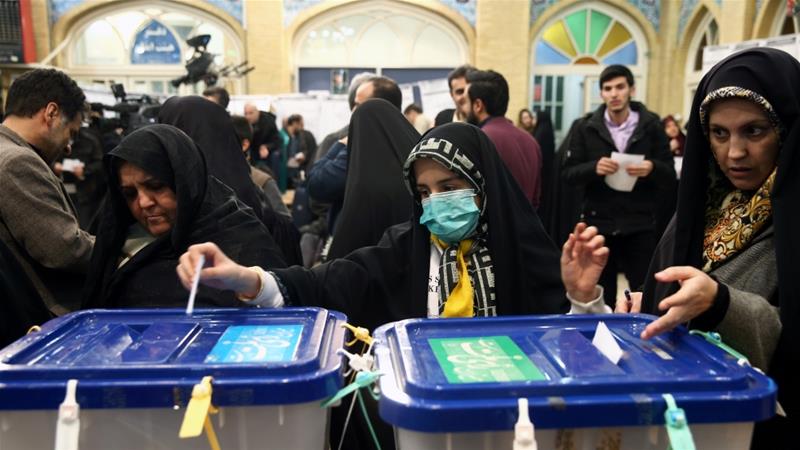 Iranians are voting in the second round of parliamentary elections in 10 constituencies, with the authorities mobilising about 100,000 people to ensure a smooth process.

Friday’s race for the remaining 10 parliamentary seats was being held in 3,100 voting stations after months of delay due to the coronavirus pandemic.

The first round held in February saw the lowest voter turnout in the 40-year history of the Islamic republic and resulted in its most conservative parliament.

“It doesn’t look like the politics dynamic in the parliament is going to change,” Al Jazeera’s Assed Baig, reporting from Tehran, said on Friday. “Two-thirds of those seats still belong to the conservatives – and that’s not good news for Rouhani’s [reformist-aligned] government” ahead of next year’s presidential election.

In July, conservative members of parliament heckled Foreign Minister Mohammad Javad Zarif and denounced him as a liar during a speech to the 290-member body, or majlis.

The issues dominating Iranian politics include the state of the economy, corruption and crippling sanctions reimposed by the United States in the wake of its 2018 unilateral withdrawal from a landmark nuclear deal signed between Iran and world powers in 2015.

In Golestan province in northeast Iran, residents said they wanted to see action from their elected representatives.

“I hope my lawmaker cooperates with the people,” said one voter.

Politicians are encouraging more people to come out and vote but the pandemic complicates the situation, while candidates were barred from campaigning on the streets.

“As the health ministry has warned against any public gathering, we asked the candidates to take their campaigns online,” Jamal Orf, the president of Iran’s election commission, said.

During the opening session of the new parliament in May, Rouhani, who is in the final year of his second and final term, had called on MPs to place the “national interest above special interests”, “party interests” or “constituency interests”.

The body, which was previously dominated by Rouhani’s reformist-moderate camp, is now composed of a majority of 220 conservative politicians, including more than 50 who are close allies of former hardline President Mahmoud Ahmadinejad.

There are also 38 independent legislators and 18 pro-reform and moderates, down from 136 in the previous House. The number of female MPs stands at 16, compared with 17 before.

Iran Denies That U.S. Downed Its Drone in Strait of Hormuz

U.S. to Establish Embassy in the Maldives

US passports to list 'Israel' for Americans born in Jerusalem

The American Economy Was Hit by a Bus. It’s Healing, but Slowly.
Europe

Scotland level 3 areas: Which areas will be in level 3 in Scotland?

Royal views: Did the Queen like Margaret Thatcher?
Asia

No deal in sight on coronavirus relief: White House adviser
We and our partners use cookies on this site to improve our service, perform analytics, personalize advertising, measure advertising performance, and remember website preferences.Ok