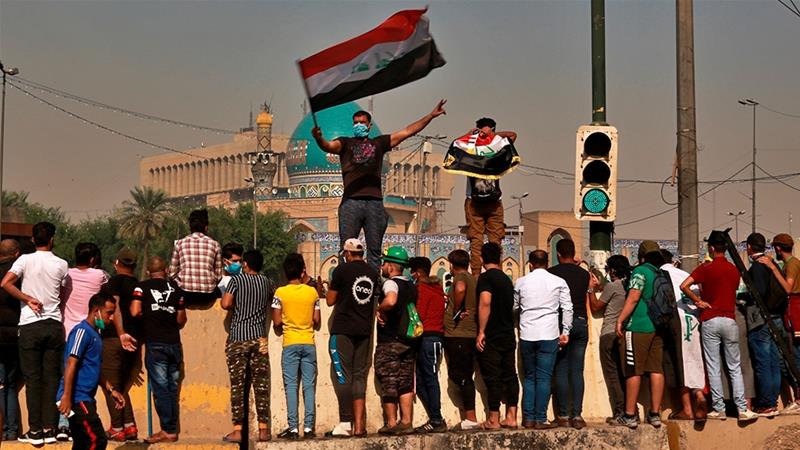 For weeks, protesters in Baghdad and a host of southern Iraqi cities have been relentlessly taking to the streets to demand the departure of the country’s ruling elite and an overhaul of the political system that was established in the wake of the 2003 US-led invasion.

Driven by anger over official corruption, high unemployment and poor public services, the protesters have dismissed government pledges to enact limited economic reforms, pressing instead for the removal of the entire political class.

The leaderless protests have been met with extreme violence, with more than 300 people killed by security forces since the demonstrations began on October 1.

Amid the mounting calls for political change, the United States, a main ally of the Iraqi government, urged on Sunday the country’s authorities to halt the violence against protesters “and fulfil President [Barham] Salih’s promise to pass electoral reform and hold early elections”.

The prime minister promised that the government and judiciary would continue to investigate the deaths and that all detainees who have been arrested in the past several weeks would be released.

Abdul Mahdi has refused to step down, but according to President Salih, he said he is willing to resign if parties agree on a replacement.

Earlier this week, the 77-year old also said new electoral reforms would be announced in the “coming few days”.

Abdul Mahdi had also promised to hold corrupt officials accountable and create more job opportunities for the Iraqi youth, but his remarks have done little to quell public anger.

“To us, these [statements] are just words,” Noor Mohammed, who says he cannot obtain a steady job, told Al Jazeera from Baghdad.

“We believe that words need to be followed by concrete actions … And we need this to happen as soon as possible, before more fellow Iraqis fall from the government’s bullets,” the 30-year-old added, insisting that an early vote and electoral reform need to be accompanied by a change in governance.

Mohammed said he has been at the sit-in in Tahrir Square for weeks, chanting against corruption and calling for accountability.

With a hoarse voice from shouting, he said: “Is this how we’re repaid? We stood up for our country and fought ISIL and others … We deserve to be ruled without corruption.”

Also on Monday, the United Nations mission in Iraq, UNAMI, proposed a series of steps to end the upheaval as it warned that a “climate of anger and fear has set in”.

It called for “maximum restraint in the handling of the protests, including no use of live ammunition, ban the improper use of non-lethal devices (such as tear gas canisters).”

UNAMI also urged the release of demonstrators and called for an investigation into the abductions of activists and medics, and reveal the identity of those responsible.

Its proposals included a series of immediate, short-term, and long-term measures, including holding those involved in corruption accountable, and implementing electoral and constitutional reforms.

Commenting on the international calls for an early election and electoral reforms, Bassil al-Qazmi, a Baghdad-based writer and political analyst, noted that protesters “refuse foreign interference” in Iraq’s internal affairs.

“This [foreign meddling] has been one of the core demands of the mass protests,” al-Qazmi told Al Jazeera via telephone.

“Today, Iraqis raised their voices to the world, after enduring a system that took orders from abroad for the past 16 years,” he said, referring to Iran, which has widespread influence in the country.

For weeks, protesters have also been directed their rage at neighbouring Iran and the powerful Iraqi Shia militias tied to it, which many allege are behind some of the bloodshed.

Both the US and Iran have significant political and military influence in Iraq, and protesters have accused the political class of being compliant to one or the other – without concern for the needs of the people.

“It’s really a power play between the US and Iran,” al-Qazmi said, adding that Washington must also be held accountable for bringing people who are “not sufficient to rule” to the table.

“When the US came with this constitution and political system [in 2003], they thought Iraqi politicians would only follow and be loyal to Washington,” he said.

“The statement may also be an attempt by the US to admit that the political elite are not up to standard, since many of them answer to Iran.”

Trump and Iran pull back from war after missile attack