Law aims to ban successful candidates from forming blocs until a government is formed and to reduce age to fight polls. 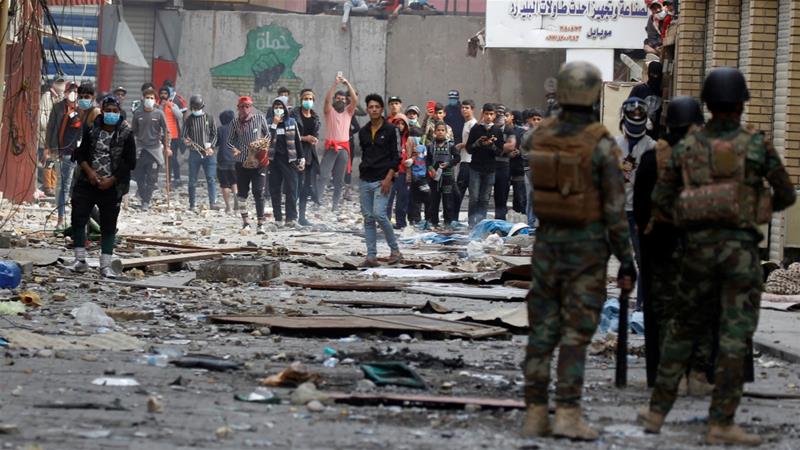 Baghdad, Iraq – The Iraqi parliament has discussed the draft of a law which seeks to strengthen electoral accountability, amid escalating anti-government protests in Baghdad and Iraq’s mainly Shia south.

The draft electoral law aims to ban successful candidates from forming political blocs until after the formation of a government as an attempt to limit the influence of Iraq’s established political alliances and blocs.

Thousands of Iraqis have been protesting since early October, demanding an overthrow of the political class seen as sectarian, corrupt and serving the foreign powers.

The draft electoral law also seeks to bring down the age at which Iraqis can nominate themselves for parliamentary elections from 30 to 25, and reduce the number of parliamentarians to 251 instead of the current 329.

The Iraqi parliament is expected to convene again on Tuesday to vote on the draft law.

The parliamentary session on Monday also discussed another draft law concerning the formation of a new electoral commission, which seeks to establish an independent and credible body to oversee future elections in the country.

Voting on that law is not expected until next month.

Speaking before the discussion on Monday, Iraq’s speaker of Parliament, Mohammed al-Halbusi, called on the parliamentarians to work together for the future of the country and its people.

“We have to work on regaining the trust of the Iraqi people and reviving their confidence in the political system by passing a new electoral law,” he said.

Meanwhile, in Iraq’s mainly Shia south, protesters continued to block the main roads and bridges in Basra and Nasiriya towns, a day after six protesters were killed and scores of others wounded following violent clashes with the security forces.

In a statement on Monday, the Iraqi Human Rights Council said 11 protesters were killed and more than 280 others wounded in the past four days in Baghdad and parts of Iraq’s southern regions.

The statement added that the security forces also arrested 187 protesters.

Calling on the government to take immediate action, the rights council blamed the deaths on the “excessive use of force” by the forces against the protesters in Baghdad, Basra and Nasiriya.

In Baghdad, street battles between the security forces and the protesters continued near Ahrar Bridge, as demonstrators demanding basic services, employment opportunities and an end to corruption gathered in Tahrir Square.

At least 330 people have been killed since the start of the mass unrest in Baghdad and southern Iraq in early October – the largest demonstrations since the fall of Saddam Hussein in 2003.