Urging a return to ‘normal life’, Adel Abdul Mahdi says the rallies have helped the gov’t to ‘reform and accept change’. 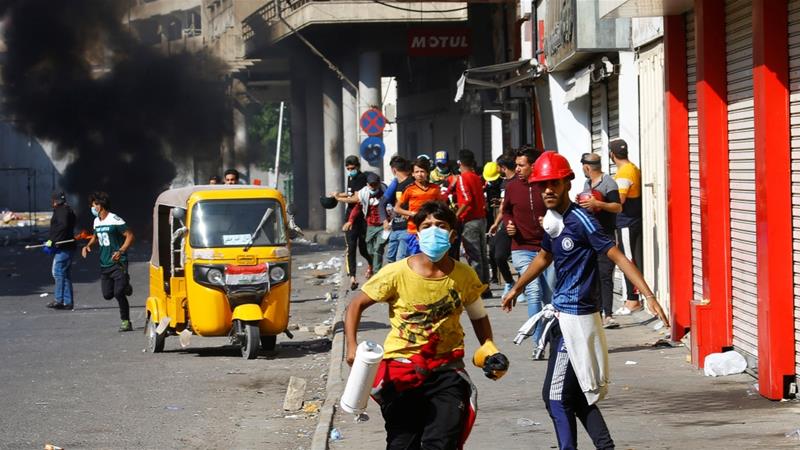 Iraq’s embattled Prime Minister Adel Abdul Mahdi has said that ongoing protests are important in bringing about reform, but must allow for a return to normal life.

In a statement on Saturday, the 77 year old also said that new electoral reforms would be announced in the “coming few days”, but fell short of giving further details.

“The protests have helped and will help pressure political groups, the government … to reform and accept change,” Abdul Mahdi said. “However continuing protests must allow for a return to normal life, which will lead to legitimate demands being met.”

His remarks come a day after fresh clashes erupted between Iraq’s security forces and anti-government protesters in the capital, Baghdad, as well as across the south of the country, despite a call for calm by the country’s top Shia leader, Grand Ayatollah Ali al-Sistani.

Since October 1, Iraqis have been pouring onto the streets to protest against corruption and the government’s failure to deliver basic services and economic opportunities. The protesters’ demands have since widened to include the resignation of the government and a complete overhaul of the country’s political system, which was established after a US-led invasion that critics say has allowed certain individuals and groups to enrich themselves and expand their influence.

A crackdown by security forces against mostly unarmed protesters has killed more than 260 people since the protests began.

Live fire is still being used and tear gas canisters, fired directly at protesters’ bodies instead of being lobbed into crowds, have killed at least 16 people, Human Rights Watch said on Friday.

Rights groups have also raised the alarm over the arrest and intimidation of activists and medics, who have reported being followed by unidentified security forces.

In his statement, Abdul Mahdi promised that the government and judiciary will continue to investigate the deaths, adding that all detainees who have been arrested in the past several weeks would be released.

“Anybody who was assaulted, kidnapped, or anybody who participated in assault, kidnap, or arrest outside of the legal framework, will face trial,” it read.

Abdul Mahdi’s statement came almost a week after he had appealed to protesters to suspend their movement, which he said had achieved its goals and was hurting the economy. The prime minister has previously promised a number of reforms, including stipends for the poor, more job opportunities for graduates and pledges to punish a handful of corrupt officials.

But critics say such moves have come too late, with protesters demanding an overhaul of state institutions, a flawed electoral process, and the departure of the entire political class. The protesters have also rejected foreign interference in Iraq, which has long been caught between its two main allies and bitter rivals, the United States and Iran.

Al Jazeera’s Mohammed Jamjoom, reporting from Baghdad, said the mood in Baghdad’s Tahrir square, the epicentre of the protests in the Iraqi capital, has been “one of resolve”, despite similar pledges made in the past.

“Everybody we’ve spoken with … they’re saying they are committed to continuing to come out here,” Jamjoom said.

“Everybody is saying they are committed to this cause; they are going to continue coming out on the streets until they feel the government is taking their demands seriously,” he said.

Earlier this month, Iraqi President Barham Salih said Abdul Mahdi was willing to resign once political leaders agreed on a replacement. He also called for a new electoral law and said he would approve early parliamentary polls once it was enacted.

Abdul Mahdi’s statement did not mention the resignation. Meanwhile, even if the new electoral law is quickly approved, the process of holding elections and forming a new government could take several months.

“Many [demonstrators] … say when they hear Iraqi politicians speaking, it’s like they’re on a separate planet … Like they’re disconnected from reality,” Jamjoom said.

Meanwhile, internet returned briefly in most parts of Iraq on Saturday after being largely shut down for three days. Authorities have heavily restricted internet access during the protests.

U.N. Says Israel May Have Committed Crimes Against Humanity in 2018 Gaza Protests