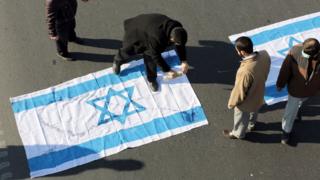 Israel has bombed Iranian targets inside Syria – leading to fears confrontations between the two powerful arch-foes could get worse. Here’s the background to what is happening.

Why are Israel and Iran enemies?

Ever since the Iranian revolution in 1979, when religious hardliners came to power, Iran’s leaders have called for Israel’s elimination. Iran rejects Israel’s right to exist, considering it an illegitimate occupier of Muslim land.

Israel sees Iran as a threat to its existence and has always said Iran must not get a nuclear weapon. Its leaders are worried by Iran’s expansion in the Middle East.

What has Syria got to do with it?

Israel has watched anxiously as its neighbour Syria has been consumed by war since 2011.

Israel has stayed out of the fighting between the Syrian government and rebels.

But Iran has played a bigger and bigger role backing Syria’s government by sending thousands of fighters and military advisers.

Israel is also worried that Iran is trying to secretly send weapons to fighters in Lebanon – Israel’s neighbour – who also threaten Israel.

Israel’s prime minister has repeatedly said that his country would not let Iran create bases in Syria which could be used against Israel.

So as Iran has become stronger in Syria, Israel has intensified its strikes on Iranian targets there.

Have Iran and Israel ever actually been at war?

No. Iran has long backed groups which target Israel – such as Hezbollah and the Palestinian militant organisation Hamas.

But a direct war would be massively destructive for both sides.

Iran has an arsenal of long-range missiles and heavily armed allies on Israel’s borders.

Israel has a very strong army and is said to have nuclear weapons. It is also solidly backed by the United States.

Trump confirms Bin Laden's successor son was killed by US