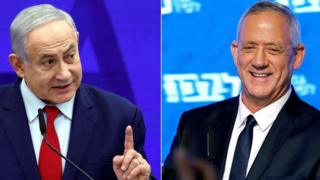 The centrist Blue and White alliance of former military chief Benny Gantz is projected to win between 32 and 34 seats, and PM Benjamin Netanyahu’s right-wing Likud party 31 to 33 seats.

Former Defence Minister Avigdor Lieberman may end up being kingmaker.

Mr Netanyahu called the snap vote after failing to form a governing coalition in the wake of an election in April.

Negotiations on the formation of a new coalition are expected to start as soon as the preliminary results come on Wednesday morning.

The exit poll of Israel’s public broadcaster Kan projected that Likud and Blue and White would each win 32 seats in the 120-seat Knesset.

They were followed by the Israeli Arab Joint List with 12 seats; Mr Lieberman’s nationalist Yisrael Beitenu party with 10; the right-wing Yamina party with seven; the ultra-Orthodox Shas and United Torah Judaism parties with nine and eight respectively; and the left-wing Democratic Union and Labour-Gesher alliances with five each.

The exit polls suggested that neither Mr Netanyahu nor Mr Gantz would be able to form a governing coalition without the support of Mr Lieberman.

He prevented Mr Netanyahu from forming a coalition after the last election because he refused to back down in a longstanding dispute with religious parties over a bill governing exemptions from military service for ultra-Orthodox young men.

During the campaign for this vote, Mr Lieberman said he wanted a unity government in which Likud shared power with Blue and White – something Mr Netanyahu ruled out.

If the official results prove to be inconclusive, it will fall to President Reuven Rivlin to decide who gets the mandate to try to form a government. That person will have 28 days to do so, with a possible extension of not more than 14 days.