JERUSALEM — Israelis are voting Tuesday in the second election in five months. The last one ended inconclusively after weeks of negotiations, led by Prime Minister Benjamin Netanyahu, failed to produce a governing coalition with a viable majority for the first time in Israel’s history.

Mr. Netanyahu, Israel’s longest-serving prime minister, is once again fighting for his political survival. Polls indicate a tight race even though he is facing possible indictment on accusations of bribery, fraud and breach of trust. This could be his last stand. 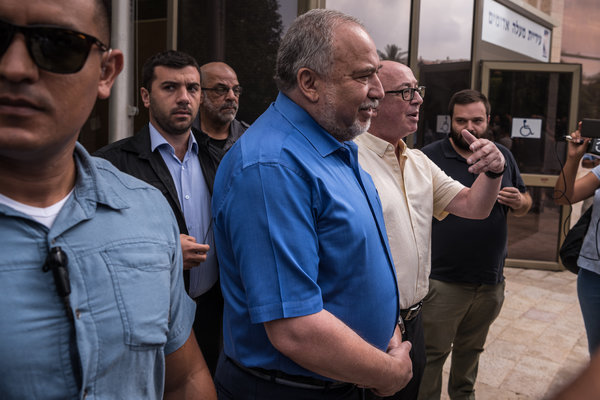 Yes, on April 9. Mr. Netanyahu, leader of the conservative Likud party, had appeared poised for another term based on the assumption that he could forge a coalition with the same right-wing and religious parties of his previous one.

But as the deadline for forming a government approached, an ally-turned-nemesis, Avigdor Lieberman, refused to join in. The leader of a secular, ultranationalist party, he did so ostensibly because of a dispute with ultra-Orthodox parties over a bill allowing more seminary students to be drafted.

That left Mr. Netanyahu and his allies one seat short of a majority in the 120-seat Parliament. Determined to deprive his rivals of a chance to form a government, Mr. Netanyahu orchestrated the swift dissolution of the newly elected Parliament, leading to Tuesday’s vote.

Mr. Lieberman’s defection from the right-wing religious axis and his refusal to join a government with ultra-Orthodox parties has thrust Israel’s secular-religious divide to the fore.

Under Israel’s electoral system of proportional representation, no single party has ever won enough votes for an outright majority in Parliament. Instead, the larger parties must form coalitions, usually by enlisting the support of smaller parties that demand concessions to protect their own narrow and particular interests.

Many Israelis are chafing over the disproportionate power that religious parties have gained over the years through this system.

The Orthodox parties are battling to preserve their values, economic interests and political influence.

In any election, the Israeli-Palestinian conflict is a perennial issue. This time, the fate of the two-state solution, long accepted internationally as the basis for a resolution, is hanging in the balance after Mr. Netanyahu pledged to annex nearly a third of the occupied West Bank.

The Trump administration has said it will release its long-awaited peace plan after Israel votes.

Campaigning, meanwhile, has focused on the politics of identity and a range of fears.

For some Netanyahu supporters, the Iranian threat is paramount, while his opponents from the center-left worry about the future of Israeli democracy. They accuse Mr. Netanyahu of trying to manipulate the news media and of undermining the judiciary and law enforcement as part of a bid to gain immunity from prosecution, including by calling to curb the powers of the Supreme Court. A hearing in his corruption cases is set for early October.

For many Israelis, this election offers a choice between a continuation of a rightward, religious shift or a return to a more liberal Israel. Some feel it’s time for a change.

“People are tired,” said Sarit Geyor, 59, the manager of a homeware store in a Tel Aviv suburb who voted for Mr. Netanyahu and Likud in 2015 but has switched to the centrist Blue and White alliance. “I think we need to give a chance to a new leader.”

Like last time, the main contest is between Mr. Netanyahu, 69, and Benny Gantz, 60, a soft-spoken, reserved former military chief of staff and leader of the Blue and White party, named for the colors of the Israeli flag.

In Israel’s parliamentary democracy, people vote for a party, not a person. Blue and White tied with Likud in April, each winning 35 seats. Once again, they are running neck and neck in the polls, with Blue and White edging ahead in some.

Likud has long been the dominant force on the Israeli right. Many Israelis still see Mr. Netanyahu, who goes by the nickname Bibi, as the most suitable candidate for prime minister. With years of experience and international standing, he has maintained an enthusiastic base.

He is credited with bringing Israel relative stability and growth and with expanding its diplomatic and trade ties in Africa, Latin America and Asia. He is also praised for his close relations with President Trump and President Vladimir V. Putin of Russia.

Mr. Netanyahu has focused on the fight against Iran’s nuclear ambitions and expanded influence. If he begins annexing West Bank territory, as promised, it would flout international opinion and law, deal a potentially fatal blow to the two-state solution and redraw the map of the Israeli-Palestinian conflict.

Mr. Gantz brings strong security credentials but is a relative political novice. Much of his appeal stems from being the “Not Bibi” candidate.

A voice of moderation, Mr. Gantz is hoping to attract disillusioned soft-right voters and as broad a cross-section of the electorate as possible. Viewed as clean of corruption, he has stuck mainly to issues of consensus and said little about what he would do if elected beyond working to unify Israelis.

“Gantz doesn’t stir up strong emotions,” said Gayil Talshir, a political scientist at the Hebrew University of Jerusalem. “It’s hard to get excited about him; it’s hard to hate him.”

Who votes, and when?

Israel has 5.8 million eligible voters in a population of nine million. Arab citizens are a sixth of Israel’s electorate. The voting age is 18.

Palestinians in the West Bank and Gaza cannot vote, and as most Palestinian residents of East Jerusalem do not hold Israeli citizenship, they cannot, either.

Most polling stations will open at 7 a.m. and close at 10 p.m., or midafternoon Tuesday in the eastern United States. Results dribble out overnight, with the outcome typically reasonably clear within six hours.

Elections are supposed to occur every four years, but many governments do not last a full term. The April election was the first to have ended without the formation of a government.

Is another deadlock possible?

Israeli elections are complicated and unpredictable, with many small parties competing for votes and the chance to influence a coalition’s makeup.

There may be no outright winner on Tuesday. Another deadlock is possible if the parties overcome public apathy and generate a reasonable voter turnout with results similar to those in April. Some Israelis are even predicting a third election.

But several new factors may change the calculus.

The main difference: Mr. Lieberman is no longer giving his automatic support to Mr. Netanyahu and says he will not help him form a narrow, right-wing-religious coalition. Instead Mr. Lieberman says his party will support a candidate willing to form a broad government of national unity.

Both Blue and White and Mr. Lieberman have said they aim to forge a coalition that excludes the ultra-Orthodox parties, ending years of what many Israelis view as political extortion by small and midsize sectorial parties in return for their support.

Blue and White says it wants to form a unity government, which would normally involve joining forces with Likud. But Mr. Gantz has ruled out sitting in one under a prime minister facing possible indictment.

Another wild card may be Ayman Odeh of the Joint List, the predominantly Arab alliance. Traditionally, Arab parties have not actively supported any Jewish candidate for prime minister and have never joined, or been invited to join, a governing coalition.

This time, Mr. Odeh has not ruled out either. The Joint List could also serve as a blocking force, depriving Mr. Netanyahu of a majority in Parliament by supporting a Gantz-led coalition while remaining outside the government.