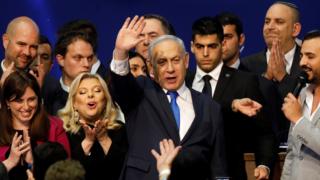 With 99% of votes counted, Mr Netanyahu’s Likud party was on track to win 36 seats, and allied right-wing and religious parties another 22.

That would leave them three short of a majority in the 120-seat Knesset.

Likud is encouraging defections from the rival centrist Blue and White alliance, which is set to win 33 seats.

The nationalist Yisrael Beitenu party could also tip the balance with its seven seats, although it has ruled out joining a Likud-led coalition that includes religious parties.

The election was Israel’s third in less than a year. Neither of the main party leaders was able to command a majority following the last two rounds.

Mr Netanyahu, 70, is Israel’s longest-serving prime minister. He is seeking a record fifth term, having been in office from 1996 to 1999 and again from 2009.

During the election campaign he presented himself as the only candidate who could guarantee the country’s security, despite facing a trial this month on corruption charges that he denies.

He also pledged to annex Jewish settlements and other land in the occupied West Bank that the Palestinians want as part of a future state – in line with the peace plan unveiled by US President Donald Trump in January. The settlements are widely considered illegal under international law, though Israel disputes this.

After voting ended on Monday and exit polls were published, Mr Netanyahu told supporters in Tel Aviv that he had won “a victory against all odds”.

He promised to build “a strong and stable government” as soon as possible and said it was important to avoid another election and “heal the rifts”.

Mr Gantz, who is a former chief of staff of the Israel Defense Forces (IDF), expressed “disappointment” with the result but did not immediately admit defeat.

“We will follow the developments regarding the actual results, and will see where we take it from there,” he said.

Benjamin Netanyahu declared a “huge victory” on election night. But with almost all of the votes counted, he doesn’t have the 61 seats he needs to form a majority government.

Mr Netanyahu will deploy all his political skills to persuade opposition MPs to defect. The precedents aren’t encouraging for him. After the 2019 election, he had 60 seats and didn’t persuade a single parliamentarian to switch sides. This time it looks as if he will need three.

If that doesn’t work, he might try to put together a broader coalition.

Another option for Mr Netanyahu could be to challenge the opposition to vote down a minority government, risking the wrath of electors who do not want a fourth election in quick succession.

Israel’s Arab Joint List had its best ever election and is the third largest group in parliament. If its seats are added to the anti-Netanyahu Jewish parties, together they will have a blocking majority of 62.

Another election is a real possibility.

Likud officials are looking to bring in defectors from rival parties to get the 61 seats they need for a majority.

A spokesman for Mr Netanyahu, Jonathan Urich, said they had been in contact with four to six lawmakers from “the other side”, but declined to name them.

“All I can say is that there are more than one or two options,” he told Channel 13 TV. “At the end of the day, whoever decides to prevent a fourth round of elections and take part in forming a government will not be seen as a traitor.”

Blue and White’s Moshe Yaalon, a former Likud minister, was confident that his colleagues would reject the overtures.

“Bibi [Netanyahu], after an election full of lies that hit a new low, in which you failed to win the 61 mandates that could have enabled you to be above the law, you are still trying to steal votes from defectors,” the Jerusalem Post quoted him as saying. “There are many in Likud who have asked us for help getting rid of you.”

Meanwhile, Mr Gantz reportedly began efforts to pass legislation that would prevent an indicted member of parliament from forming a government.

Nitzan Horowitz, leader of left-wing Meretz party, said there would be a clear majority for the law in the Knesset and that it was “the moral thing to do”.

But Defence Minister Naftali Bennett, head of the right-wing Yamina alliance, said it would be “extremely undemocratic and spit in the face of half the country”.

Mr Netanyahu is due in court on 17 March to face charges of bribery, fraud and breach of trust in connection with three separate cases.

He is alleged to have accepted gifts from wealthy businessmen and dispensed favours to try to get more positive press coverage.

Mr Netanyahu has strongly denied any wrongdoing, saying he is the victim of a politically motivated “witch hunt”.