JERUSALEM — Israeli opposition parties announced on Wednesday that they had reached a coalition agreement to form a government and oust Benjamin Netanyahu, the longest-serving prime minister in Israeli history and a dominant figure who has pushed his nation’s politics to the right.

The announcement could lead to the easing of a political impasse that has produced four elections in two years and left Israel without a stable government or a state budget. If Parliament ratifies the fragile agreement in a confidence vote in the coming days, it will also bring down the curtain, if only for an intermission, on the premiership of a leader who has defined contemporary Israel more than any other.

The new coalition is an unusual and awkward alliance between eight political parties from a diverse array of ideologies, from the left to the far right. While some analysts have hailed it as a reflection of the breadth and complexity of contemporary society, others say its members are too incompatible for their compact to last, and consider it the embodiment of Israel’s political dysfunction.

The alliance would be led until 2023 by Naftali Bennett, a former settler leader and standard-bearer for religious nationalists, who opposes a Palestinian state and wants Israel to annex the majority of the occupied West Bank. He is a former ally of Mr. Netanyahu often described as more right wing than the prime minister.

If the government lasts a whole term, it would then be led between 2023 and 2025 by Yair Lapid, a centrist former television host considered a standard-bearer for secular Israelis.

It was Mr. Lapid who was picked by the president, Reuven Rivlin, four weeks ago to try to form a new government. And it was Mr. Lapid who called Mr. Rivlin at 11:22 p.m. on Wednesday night, with just 38 minutes left before his mandate expired, to inform him that he had assembled a fragile coalition. 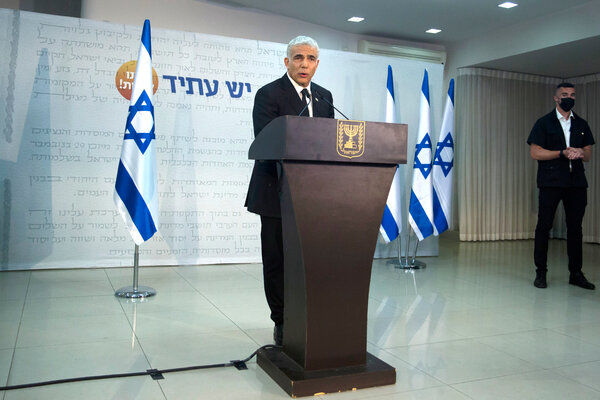 “I commit to you, Mr. President, that this government will work to serve all the citizens of Israel, including those who aren’t members of it, will respect those who oppose it, and do everything in its power to unite all parts of Israeli society,” Mr. Lapid said, according to a readout provided by his office.

Mr. Bennett, 49, is the son of American immigrants, and a former software entrepreneur, army commando and chief of staff to Mr. Netanyahu. His home is in central Israel, but he was once chief executive of an umbrella group, the Yesha Council, that represents Jewish settlements in the occupied West Bank. Until the most recent election cycle, Mr. Bennett was part of a political alliance with Bezalel Smotrich, a far-right leader.

Though Mr. Bennett’s party, Yamina, won just seven of the 120 seats in Parliament, Mr. Netanyahu could not be ousted without his support, allowing him to set the terms of his involvement in the coalition.

Mr. Lapid, 57, is a former news anchor and journalist who became a politician nine years ago and later served as finance minister in a Netanyahu-led coalition. His party placed second in the general election in March, winning 17 seats. But Mr. Lapid considered the ouster of Mr. Netanyahu more important than demanding to go first as prime minister.

To avoid exacerbating their differences, Mr. Lapid and Mr. Bennett have promised to focus on largely technocratic issues like the economy and infrastructure, and to stay away from more contentious topics such as trying to resolve the Israeli-Palestinian conflict.

But some commentators say Mr. Bennett’s party will be under pressure to prove to their supporters that their right-wing instincts have not been dimmed by their coalition partners.

In a harbinger of potential tensions to come, talks almost collapsed on Wednesday after a disagreement over whether a key lieutenant to Mr. Bennett, Ayelet Shaked, a proponent of major judicial reform, would be allowed to join a committee that appoints new judges.

And some leftist and centrist ministers are expected to rile their right-wing partners by promoting police reform or advocating curbs on settlement expansion.

The alliance will also include an Arab Islamist party, Raam, which would become the first independent Arab group to join a governing political alliance in Israeli history. The agreement “secures the position of the Arab parties as an influential and legitimate player in the political arena,” the party said in a statement.

But its participation is also expected to become a point of friction. Mr. Bennett briefly pulled out of coalition talks during the recent war in Gaza, wary of participating in an alliance with a party run by Palestinian citizens of Israel.

Raam joined the coalition on the promise of greater rights and resources for Israel’s Arab minority — but some of its demands, including the repeal of a controversial housing law that disproportionately hinders the Arab minority, are deemed unacceptable to some of the coalition’s hard-right members.

In the meantime, Mr. Netanyahu, who remains caretaker prime minister, is doing all he can to upend the agreement. The speaker of the Israeli Parliament, Yariv Levin, is a member of Mr. Netanyahu’s party, Likud, and can use parliamentary procedure to delay the confidence vote until Monday, June 14, constitutional experts said.

In that time, his party has promised to pile pressure on right-wing members of the alliance to jump ship, telling them that they have sold out by aligning themselves with leftist and Arab lawmakers.

If Mr. Netanyahu fails to persuade enough opponents, it will spell the end — at least for now — of his run at the pinnacle of Israeli politics, the longest tenure of any Israeli prime minister. Either way, he leaves a lasting imprint on Israeli life, and will likely seek to retain significant influence as leader of the opposition.

The presence of Mr. Bennett at the threshold of power is testament to how Mr. Netanyahu has helped shift the pendulum of Israeli politics firmly to the right.

What's behind the push against Iran nuclear deal?