Home » Middle East » 'Not afraid of the government': One month of protests in Sudan

The current wave of anti-government protests has become the longest since Sudan gained independence in 1956. 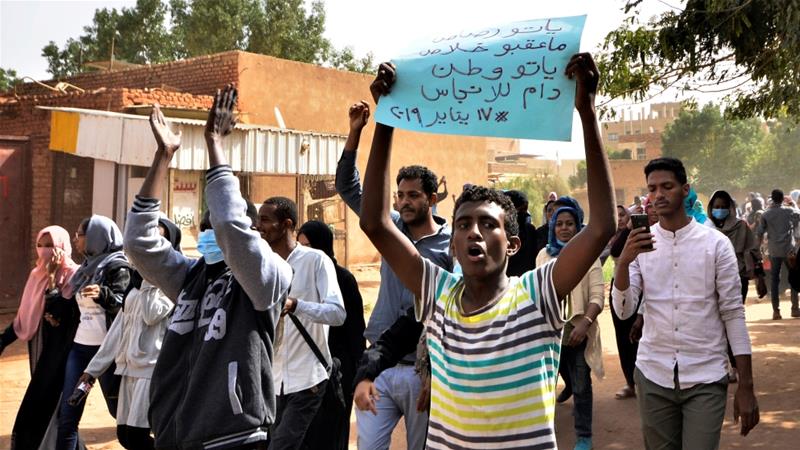 Khartoum, Sudan – Jihan Abdulrahman sat in her living room, surrounded by family, holding her middle daughter Samah. Both had tears in their eyes as Jihan recalled the last conversation she had with her younger brother Saleh on the morning of January 9.

“I woke him up before 9am because he asked me to,” she said, wiping her tears. “He and his brothers wanted to head to Omdurman and join the protests.”

They left early because they knew the security forces would eventually block roads to stop the procession, she said. Jihan kept checking up on them via phone but soon her worst fears were confirmed as she learned that 22-year-old Saleh had been shot.

“They struggled to get him to a hospital and there he kept bleeding,” she said. “Two shots. One in his arm and the other in his back.” He died later at the hospital. 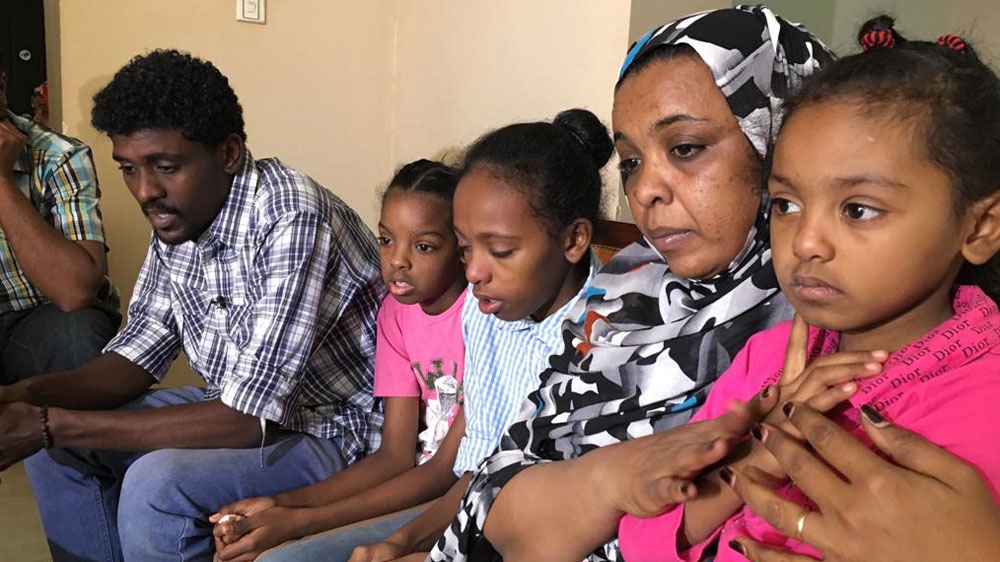 The Omdurman protest was one of more than 300 anti-government demonstrations that have taken place in Sudan since December 19. Dozens of people have been killed, most of them shot by security forces. Sudan’s government puts the death toll at 26, while activists say at least 55 people have died.

Inflation has soared in the past few years, leaving many unable to afford basic commodities, while half of Sudan’s population lives below the poverty line, according to the World Bank.

In the months before the protests, Sudan’s national economy was facing additional strains. Shortages of fuel and cash had resulted in long queues forming in front of banks, ATMs and petrol stations. Amid a lack of hard currency in the country, the price of some imported medications soared, while others became scarce.

The first protest took place in the city of Atbara sparked by a shortage of bread. The local authorities later announced that there was not a single sack of flour in the city at the time. Following that demonstration, people in the neighbouring town of Berber also took to the streets to protest against economic conditions. It was the start of a domino effect that spread nationwide.

The government declared a state of emergency and imposed curfews in some of the towns where protesters had taken to the streets. It also announced closures of schools and universities. Internet access was restricted and some social media platforms like Facebook, Whatsapp and Twitter were blocked, accessible only through virtual private networks.

Regardless, the internet became the most reliable way to document and report on what was happening on the streets, as security forces arrested and blocked journalists covering the stories.

Videos of men riding in pick-up trucks, their faces wrapped in heavy scarves, have surfaced online. In some of the videos, the men can be seen beating protesters and breaking into activists’ homes and arresting them.

“These are the militias of the ruling National Congress Party,” the Umma Party, led by opposition leader Sadiq al-Mahdi, stated in a press release.

The government has responded to the protests by blaming its economic woes on US sanctions that were imposed in 1997 and not lifted until late 2017. It has also accused those protesting of being influenced by what it calls “foreign powers aiming to destabilise the country”.

“Some are adopting foreign agendas,” President Omar al-Bashir said in his first rally three weeks after demands for him to resign started. “They’re being operated by outside forces … enemies of Sudan. However, we reiterate: Those who are seeking power, they are welcome. However, there’s only one route to grab power – it is the ballot boxes. It is only through transparent, free elections.” 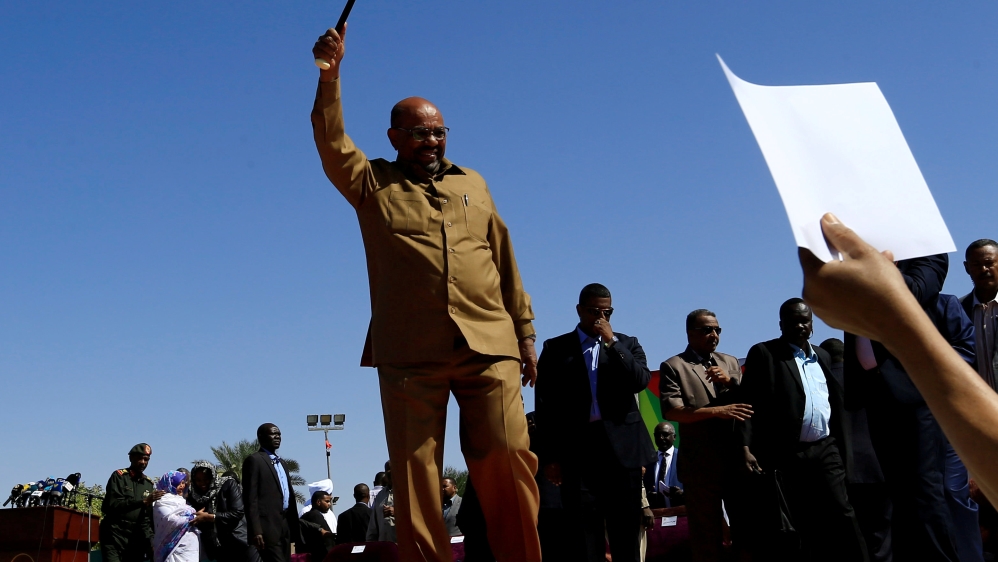 The government has announced plans to increase salaries for civil servants to try and end the economic crisis. President al-Bashir remains defiant in his position to stay in office until elections are held next year, while those protesting remain determined to keep going till he steps down.

That movement gained further momentum when 23 different opposition parties declared their support for the protests.

“The government needs to end its rule and step down,” Mubarak Elfadil, the head of Umma National Party for Reform said.

His party was once part of the government but pulled out after the protests started, along with another party, Sudan Reform Now, headed by Ghazi Salahuddin. Ghazi was once a member of the ruling party, but he quit and created his own political party after the protests.

Some political analysts say the current protests could create further divisions within the ruling party, while political opponents said the president’s policies were responsible for the unrest.

“The policies of President Bashir already seceded [South] Sudan and created lots of conflict and wars all over Sudan with a failed economy,” Mariam al-Aahadi, the vice president of the mainstream Umma party told Al Jazeera.

“President Bashir is frightened by the indictment of the ICC,” she added, referring to the International Criminal Court in The Hague, which issued arrest warrants on Sudan’s president for genocide, war crimes and crimes against humanity in the western region of Darfur.

“He is holding Sudan as a captive so he can have a safe haven and it doesn’t work that way,” she added.

There have been several waves of anti-government protests since 2012. But the current one has become the longest since Sudan gained independence in 1956. Hundreds have been arrested in cities and villages across Sudan amid street demonstrations.

In every march, similar slogans can be heard: “Freedom, Peace and Justice” as well as “step down, that’s it.”

Among those arrested are activists, doctors and lawyers, as well as journalists who have been covering the demonstrations. What started out as a sporadic wave is becoming more organised with a group known as the Sudanese Professionals Association taking the lead in organizing major protests in the capital Khartoum and several other cities.

“We will continue to pursue and achieve our rights for democratic change peacefully standing together as one nation against the collapsing regime in Sudan,” the group said on its Twitter page. Its members are in hiding and those that are known are in detention.

“Since the 19th of December, 2018, Sudanese people have been taking the streets bravely in the face of the brutal militarily and security apparatus of the ruling National Congress Party in Sudan,” the group tweeted.

“These violations included the use of live ammunition that led to the death of several tens of peaceful civilians, documented attacks on hospitals and medical facilities, arbitrary detention of hundreds of Sudanese citizens.”

Jihan said her husband, who was arrested on December 28 during a meeting with members of the Baath party, is one such case.

“I have nothing for this government and I’m not afraid of them. When my husband comes out, we will file a lawsuit against the security forces for killing my brother.”

But it’s not clear if he will be released anytime soon. Sudan’s State Security Prosecution issued arrest warrants for more than 70 people on Friday, including 38 journalists and activists on charges of “incitement” and spreading “false news”.

More protests have been called for, as what has become to be known as the Sudan Uprising enters its second month. Sudan remains at crossroads, positioned between two determined sides, each keen on winning the battle.

Palestinian ex-prisoner: You sit there wishing you would die