BEIRUT, Lebanon — A prominent Lebanese critic of the militant group Hezbollah was found dead on Thursday after being shot multiple times in what his friends called a political assassination.

Lokman Slim, 58, was a publisher and filmmaker who was among a small group of political activists from the country’s Shiite Muslim minority who openly criticized Hezbollah, a Shiite extremist group, for its violent role in the country and the wider Middle East.

Mr. Slim’s killing came at a time of multiple crises that have pushed Lebanon to the brink of collapse. Its political system is nearly paralyzed, its economy is in free-fall, and many of its people are still suffering the aftereffects of a huge explosion in the Beirut port in August that killed more than 200 people.

For weeks, Lebanon has been under total lockdown, with a 24-hour curfew aimed at slowing the rapid spread of the coronavirus.

The killing of Mr. Slim, which the Lebanese authorities said they were investigating, raised fears among his supporters that the country could slide into a new period of political killings similar to those it had suffered through in the past. Assassinations have been rare in recent years, but multiple killings of politicians, journalists and security officials mar the country’s history.

“It is dangerous that there could be a return to assassinations,” said Ali al-Amine, a Shiite journalist and Hezbollah critic who considered Mr. Slim a friend. 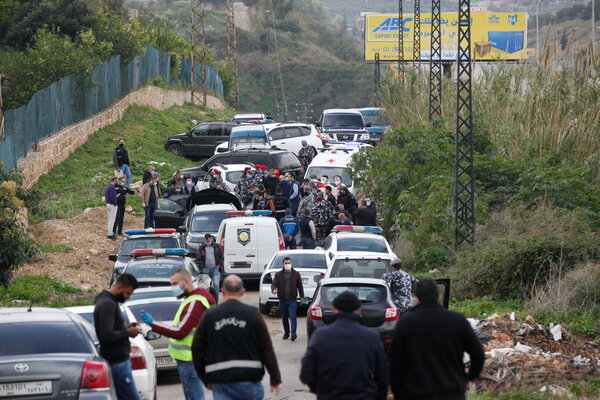 Few of Lebanon’s political killings are ever solved, and it is widely believed that the authorities are hamstrung in their ability to investigate by fears of angering powerful political forces.

Mr. Slim hailed from a prominent Shiite family; his father had been a member of Lebanon’s Parliament. He studied philosophy and ancient languages at the Sorbonne in Paris before returning to Lebanon in the late 80s.

Over the next decades, he launched projects aimed at documenting Lebanon’s violent history and paving the way for what he hoped would be a more peaceful future, based on secular values and respect for religious diversity.

He opened a publishing house called Dar al-Jadeed, and in partnership with his wife, Monika Borgmann, created an organization, UMAM Documentation and Research, to compile information about the history of Lebanon and its 15-year civil war, which ended in 1990.

He and Ms. Borgmann made films, including Massaker, which featured interviews with participants in the Sabra and Shatila massacre of 1982, and Tadmor, which recreated the traumatic detentions of Lebanese men in a notorious desert prison in Syria.

All along, Mr. Slim remained in his family’s historic, book-filled villa in the southern suburbs of Beirut, an area that has come to be dominated by Hezbollah.

While many of the group’s critics refrain from criticizing it openly, Mr. Slim accused it of imposing its view of eternal war against Israel and the United States on Lebanon’s Shiites, and criticized it for sending fighters to back President Bashar al-Assad of Syria in the civil war there.

That stance won Mr. Slim friends among Hezbollah’s foes in Lebanon, as well as among diplomats from the United States, which considers Hezbollah a terrorist organization.

Diplomatic cables released in 2010 and 2011 by WikiLeaks show that United States diplomats often sought out Mr. Slim for his views on developments in the Shiite community, provided funding for some of his initiatives and arranged high-level meetings for him during visits to Washington.

Those initiatives, which included supporting independent Shiite candidates in parliamentary elections and forming a Shiite clerical body to serve as an alternative to that seen as beholden to Hezbollah, earned him harsh criticism from Hezbollah and its political allies.

They dismissed him and his colleagues as “the Shiites of the embassies,” an insult meant to suggest that their support came from Western governments and not from the communities they lived in.

Mr. Slim often received personal threats. Last year, rioters attacked his home and covered the walls with insults, prompting him to live elsewhere for a while.

“Lokman Slim publicly and privately acknowledged that there were threats being made against his life, and yet he bravely continued to push for justice, accountability, and the rule of law in Lebanon,” Dorothy C. Shea, the U.S. ambassador to Lebanon, said in a statement. “This assassination was not just a brutal assault on an individual, but a cowardly attack on the principles of democracy, freedom of expression, and civic participation.”

In January, in an interview on an Arabic satellite station, Mr. Slim suggested that the hazardous chemicals that had blown up in the Beirut port had been brought to Lebanon for the Syrian government, with the complicity of Russia and Hezbollah.

“We have before us a war crime whose parties are Moscow, Beirut and Damascus,” Mr. Slim said, although there is no clear evidence that Hezbollah or any government played a direct role in bringing the chemicals to Beirut.

In a statement from its media office, Hezbollah condemned Mr. Slim’s killing and called on the Lebanese authorities “to work quickly to uncover the perpetrators and punish them.”

On Wednesday, Mr. Slim drove to southern Lebanon to visit a friend and never returned home. His relatives posted frantic messages on social media that he was not answering his cellphone.

The security forces found his body on Thursday in a car he had rented for the trip, on an isolated road near the southern village of Addoussieh. A coroner said he had been shot six times, including three times in the head.

Mr. al-Amine, Mr. Slim’s friend, said that Mr. Slim’s public positions and the area where his body was found made it likely that Hezbollah had killed him.

“Everyone knows that that area is completely controlled by Hezbollah,” he said.

Mr. Slim’s relatives worried that his would become the latest in Lebanon’s string of unsolved killings.

“I want an investigation and I want his killers to be punished,” said Ms. Borgmann, his wife, emphasizing that she wanted an international investigation because she did not trust the Lebanese authorities to find the truth.

Ms. Slim’s sister, Rasha al Ameer, said he had told her that if he was ever assassinated to consider it “a work accident.” She had been at a police station on Thursday morning to report him as missing when someone had called to give her the news.

Ms. al Ameer, like Ms. Borgmann, said she had little hope that the Lebanese authorities would identify the killers.

“Why should they waste their time going around in the same closed circle?” she said, seeing her brother in the long line of such killings in Lebanon.

“He was not the first, and he will not be the last,” she said.