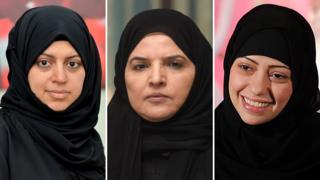 The joint statement was the first collective rebuke of the Gulf kingdom since the council was set up in 2006.

It reflects international concern at the detention of a number of activists in the past year and also at the murder of the journalist Jamal Khashoggi.

A Saudi diplomat denounced the use of such statements “for political causes”.

“Interference in domestic affairs under the guise of defending human rights is in fact an attack on our sovereignty,” said Abdul Aziz Alwasil, the kingdom’s permanent representative in Geneva.

The BBC’s Imogen Foulkes in Geneva says that for years the Human Rights Council has shied away from public criticism of Saudi Arabia.

Many European countries view Riyadh as an ally in a troubled part of the world, restricting their concerns over human rights to private informal chats, our correspondent adds.

On Thursday that changed. All 28 members of the European Union and eight other states – Australia, Canada, Iceland, Liechtenstein, Monaco, Montenegro, New Zealand and Norway – “expressed significant concerns about reports of continuing arrests” of human rights defenders, including women’s rights activists.

“We are particularly concerned about the use of the counter-terrorism law and other national security provisions against individuals peacefully exercising their rights and freedoms,” said the joint statement, which was read out by Iceland’s permanent representative, Harald Aspelund.

“Human rights defenders and civil society groups can and should play a vital role in the process of reform which the kingdom is pursuing.”

The countries called on the Saudi authorities to release all the activists, including the nine women and one man whose names Mr Aspelund read out.

Saudi Arabia began detaining the activists in May, just weeks ahead of the lifting of the ban on women driving for which many of them had campaigned.

In November, human rights groups reported that at least four of the women were alleging that interrogators had tortured them, including with electric shocks and whippings, and had sexually harassed and assaulted them. The Saudi deputy public prosecutor has said the allegations are “false”.

On Friday, the public prosecutor’s office announced it was referring to court the cases of a group of people, who human rights groups said included several of the activists.

It did not specify the charges, but said they were suspected of undertaking “co-ordinated and organized activities… that aim to undermine the kingdom’s security, stability, and national unity”.

Crown Prince Mohammed bin Salman has insisted that the women’s rights activists are being held on national security grounds rather than as part of a wider crackdown on dissent.

The joint statement by the 36 states also condemned the killing of Jamal Khashoggi at the Saudi consulate in Istanbul in October, and told the kingdom that those responsible had to be held to account.

“We call upon Saudi Arabia to disclose all information available and to fully co-operate with all investigations into the killing, including the human rights inquiry by the special rapporteur on extrajudicial, summary or arbitrary executions,” it said.

The special rapporteur, Agnes Callamard, said last month that the evidence showed that Khashoggi was “the victim of a brutal and premeditated killing, planned and perpetrated by officials of the state of Saudi Arabia”.

Saudi prosecutors have claimed that Khashoggi was killed by a “rogue” team of agents not acting the government’s orders, and have put 11 people on trial for his murder.

UK 'would not support Israeli annexation of West Bank territory'

To Make Sense of Lebanon’s Protests, Follow the Garbage