BEIRUT, Lebanon — A Saudi oil pipeline was attacked by drones, causing “limited damage,” the Saudi energy minister said on Tuesday, a day after Saudi Arabia said two of its oil tankers had been damaged in an act of sabotage, ratcheting up tensions in the region.

The announcement came shortly after Iranian-aligned Houthi rebels in Yemen claimed, in a report on a TV station run by the Houthis, to have carried out an attack with seven drones that “targeted vital Saudi facilities.” The station, Al-Masirah, did not specify which targets had been struck or when, leaving it unclear whether it was describing the same attack as the Saudis.

Though little hard information has emerged about the tanker attacks, American and Gulf suspicions have centered on Iran, in an area already jittery about the prospect of a violent clash with the republic. The Trump administration has warned of planned aggression by Iran or its proxies, though it has not elaborated on that claim, and has deployed military forces to the region, while Iran recently threatened to close the Strait of Hormuz, a crucial shipping route. 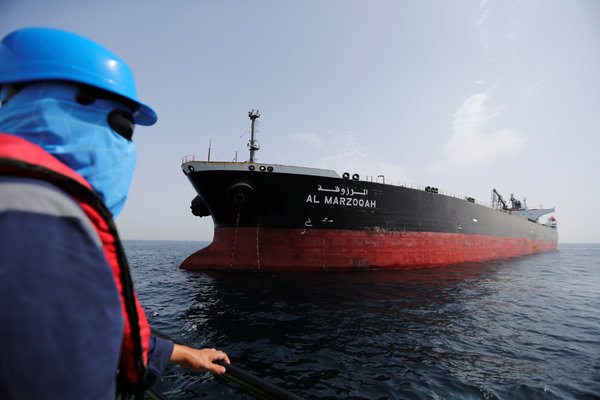 Saudi Aramco, the government-controlled oil company, has stopped pumping through the pipeline while it assesses the damage and makes repairs, the energy minister, Khalid al-Falih, said on Tuesday.

“The Kingdom condemns this cowardly attack, and this recent terrorist and sabotage act in the Arabian Gulf against vital installations not only targets the Kingdom, but also targets the safety of the world’s energy supply and the global economy,” the statement read.

Saudi Arabia and the United Arab Emirates are fighting against the Houthis in Yemen to restore the government that the Houthis ousted from the capital, Sanaa, in late 2014. The war in Yemen is viewed as another front in the regional power struggle between Saudi Arabia and Iran, though the Houthis deny that they are an Iranian proxy.

The United Arab Emirates has said that four ships were damaged on Sunday in its coastal waters near the Strait of Hormuz, the vital waterway to the Persian Gulf, through which much of the world’s oil flows. On Monday, the Saudi government said two of the ships were Saudi tankers — identified by industry officials as the Al Marzoqah and the Amjad — and a Norwegian shipping company said another was one of its tankers, the Andrea Victory.

The damaged pipelines run from the oil production areas in the eastern part of the country to the Red Sea in the West, where the Saudis maintain export facilities. Those facilities help ensure they can continue to export oil if they have difficulties doing so from the Persian Gulf.