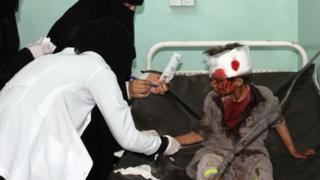 Spokesman Col Turki al-Maliki said judgements in the unspecified cases would be announced once reached.

UN experts have said the coalition may be responsible for war crimes.

They have also expressed concern about the independence of the unit set up by coalition to review alleged violations.

Yemen has been devastated by a conflict that escalated in March 2015, when the rebel Houthi movement seized control of much of the west of the country and forced President Abdrabbuh Mansour Hadi to flee abroad.

Alarmed by the rise of a group they believed to be backed militarily by Iran, Saudi Arabia, the United Arab Emirates and seven other Arab states began a campaign aimed at restoring Mr Hadi’s government.

The UN had verified the deaths of at least 7,500 civilians by September 2019, with most caused by coalition air strikes. A monitor group has estimated that the fighting has killed 100,000 people, including 12,000 civilians.

At a news conference in London on Wednesday, Col Maliki reaffirmed the “coalition’s commitment to the provisions and rules of international humanitarian law and to holding violators of the rules of engagement and violators of international humanitarian law – if any – in accordance with the laws and regulations of each country in the coalition”, according to the official Saudi Press Agency.

The coalition had sent “files of the results of investigations of incidents of presence of a mistake and violation of the rules of engagement to the concerned countries”, he said, adding that “the judicial authorities have begun the procedures of the trial”.

The SPA report did not name any of the incidents, but the Guardian newspaper reported that air crew faced courts martial over three attacks:

In September, the UN Group of Experts on Yemen said it had reasonable grounds to believe that individuals in Saudi-led coalition and Yemeni pro-government forces had conducted acts that may amount to war crimes, including:

The report accused Houthi rebels of carrying out acts that may amount to war crimes, including direct attacks against civilians and indiscriminate attacks, as well as murder, torture, hostage-taking and enlisting children.

The experts also said a review of the coalition’s Joint Incidents Assessment Team (JIAT), set up by Saudi Arabia to review alleged violations, had raised “concerns as to the impartiality of its investigations and the thoroughness and credibility of its analysis and findings”.

The JIAT’s assessment of the targeting process was “particularly worrying, as it implies that an attack hitting a military target is legal, notwithstanding civilian casualties, hence ignoring the principle of proportionality”, it added.