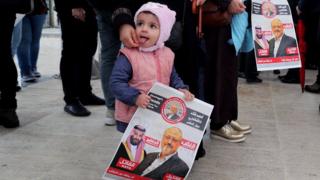 The reports about the CIA conclusions emerged in US media in the late hours of 16 November.

Saudi Arabia insists the crown prince knew nothing about the killing.

In its morning news bulletins and coverage on 17 November, the state-run, news-oriented Saudi Al-Ikhbariya TV led with news that Saudi King Salman bin Abdulaziz and his son Crown Prince Mohammed bin Salman sent cables of congratulations to King Mohammed VI of Morocco on the occasion of his country’s independence.

Although the TV station then reported that the Russian foreign ministry had rejected the politicising of the Khashoggi case, it failed to make any reference to the Khashoggi-related CIA conclusions. The channel’s coverage was mostly focused on developments in Yemen.

Likewise, the Dubai-based, Saudi-funded Al-Arabiya TV has ignored the CIA story in its morning coverage and news bulletins.

Although it reported the denial by the Saudi ambassador to the US, Prince Khalid bin Salman, that he encouraged Khashoggi to go to Istanbul, the pan-Arab broadcaster also failed to make any reference to the widely-reported CIA conclusions.

The channel’s coverage was focused on developments in Yemen, Syria, Israel and Iraq.

The London-based, Saudi-funded pan-Arab daily Asharq al-Awsat also completely ignored the news. But it featured Prince Khalid’s denial prominently on its website under the headline: “Khalid bin Salman underlines the falsehood of The Washington Post’s allegations.”

Al-Hayat daily, another Saudi-funded paper based in London, also turned a blind eye to the CIA reports, and instead highlighted Moscow’s comments about Khashoggi.

The top two headlines of Okaz, a Saudi-based pro-government daily, read: “Khalid bin Salman denies the allegations of The Washington Post about his contact with Khashoggi” and “The kingdom of justice…the rights of its citizens are never wasted.”