As fighting and shelling continues near front lines, residents make their way to Douma in centre of the besieged suburb. 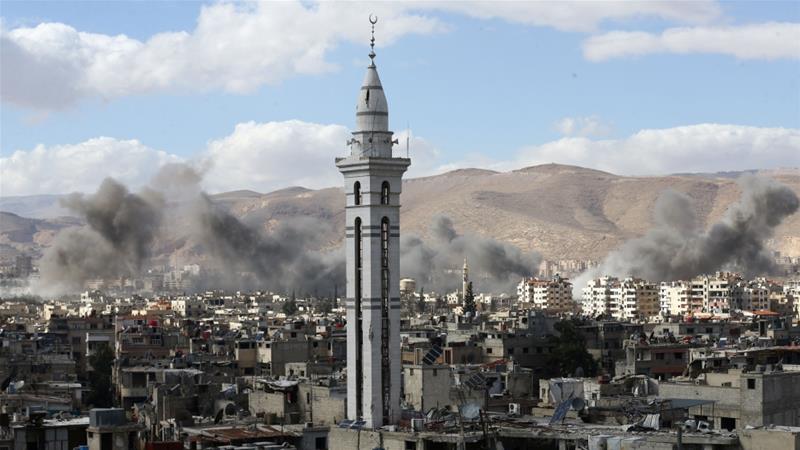 Rebels in Syria’s Eastern Ghouta “refuse to leave” and have reiterated they will defend the area, saying a Russian-proposed withdrawal was not a serious offer, a spokesperson of one of the rebel groups in the enclave told Al Jazeera.

Wael Olwan, of the Failaq al-Rahman (the Rahman Legion), a major armed group linked to the Free Syrian Army in Eastern Ghouta, said on Wednesday that Moscow insists on using military escalation as a means to cause “mass displacement”.

“Russia’s persistence at causing mass displacement is a crime that cannot be ignored,” he said.

Earlier on Wednesday, Reuters News Agency reported that a military spokesperson for an unnamed rebel group said that they will not accept a negotiation brought forward by Russia.

“There are no negotiations about this subject,” Hamza Birqdar told Reuters in a text message, referring to Russia’s offer to provide rebels and their families safe passage out of besieged Eastern Ghouta.

“The factions of Ghouta and their fighters and its people are holding onto their land and will defend it,” Birqdar added.

Meanwhile, the government has said it will send reinforcements, including 700 fighters, to join a battle against rebel groups in an effort to defeat them in their last major stronghold, the Syrian Observatory for Human Rights (SOHR) said on Wednesday.

The Damascus suburb has been under rebel control since mid-2013. Shortly after, Syrian President Bashar al-Assad imposed a siege on the area, home to some 400,000 people.

Over the years, and following several government-led bombardment campaigns in an attempt to drive out armed opposition groups, residents of the enclave have endured a humanitarian crisis that is now further deteriorating.

Since February 18, Russian-backed government warplanes intensified their bombardment of Eastern Ghouta, killing at least 770 people to date, according to the SOHR.

The war monitor recently dubbed the offensive as the “bloodiest” the country has seen in its six years of conflict. Health officials in the besieged suburb had accused the Syrian government forces of using chlorine gas in their latest aerial bombardment campaign.

A United Nations Security Council resolution calling for a 30-day ceasefire and a Russian-sponsored truce failed to evacuate trapped residents and allow for the flow of desperately needed aid including food and medicine.

A ground assault launched by Syrian forces to penetrate into the enclave has proved unsuccessful thus far, as Syrian troops continue to fight rebels from multiple fronts.

Claims that Syrian troops and pro-government allies had taken control of more than one-third of the enclave has been described as “inaccurate” by activists on the ground.

The ongoing confrontation has led many who reside in the outskirts to relocate to Douma, one of Eastern Ghouta’s biggest towns, which sits in the centre of the enclave.

Among the smaller towns on the edges of the enclave are Misraba and Al-Shifoniyah – which have particularly been targeted as a result of their proximity to the fighting.

Ali Al Khouli, an independent journalist based in Misraba, told Al Jazeera that at least 1,000 families left for Douma since Tuesday.

“That’s about 5,000 people who left yesterday, and today,” he said on Wednesday morning from the town that is home to about 7,000 families.

According to Khouli, of those, some 3,000 families were internally displaced as they had come to seek refuge in Misraba from other nearby villages in the enclave.

The government’s “relentless” bombardment campaign in Eastern Ghouta and on Misraba particularly, has “completely” damaged most of the town’s buildings and infrastructure, Khouli said.

“People were afraid,” he said, “They didn’t want government troops to reach their doorsteps and kill them and their families,” Khouli said.

“So many decided to leave, especially those who live in relatively open farmland areas, not only to Douma but to other central towns such as Harasta,” he explained,

“Every hour, at least five air raids would hit the area.”

The resumption of the aerial campaign on Tuesday came shortly after an aid convoy was not able to unload supplies to residents trapped inside the enclave, after managing to pass a government-controlled checkpoint for the first time in nearly a month.

Aid workers had said the Syrian army confiscated many of the supplies on board, blocking the delivery of about 70 percent of medical supplies.