Residents of Ashkelon, an Israeli city barely a dozen miles north of Gaza, emerged gingerly from their houses on Friday, hours after a cease-fire had come into effect. During 11 days of fierce fighting, they had been under siege from incessant salvos of rocket fire.

Now, the skies were as calm as the nearby sea, and people said they were glad for the respite.

Yet here, and across Israel, there were other common sentiments: a nagging sense of disappointment that nothing had been resolved by the fighting, and concern that the truce was fragile and premature. Instead, many Israelis said that the military should have carried on pounding Hamas for another week or two.

The shared dissatisfaction throughout the country signaled Israelis’ growing impatience with what they see as hastily arranged, unconditional cease-fires. Each successive, inconclusive round of conflict has only added to the sense of futility, with no decisive victory or conclusion in sight. 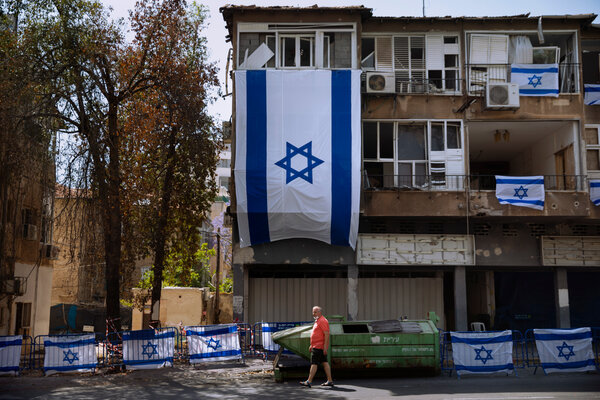 “The mission wasn’t completed,” said Michal Kutzuker, 46, a mother of four who was sitting out eating ice-cream at Captain Crepe in Ashkelon Marina, an open-air leisure complex, with her extended family. “Nothing has changed.”

Speaking like a frustrated general, as many do here, she added: “Israel looks beaten, not determined. A psychological victory is as important as a physical one.”

After four major conflicts in the past 12 years and many shorter cross-border conflagrations in between, the threat of rocket fire has become a familiar, if terrifying, part of life here. Hamas militants launched more than 4,300 rockets at Israel, and Israeli warplanes bombarded 1,000 targets in Gaza.

But this time, residents said, it was different: more furious and intense, with Hamas indiscriminately firing barrages of up to 40 rockets at a time at the civilian population, sending people sprinting for shelter. Dozens of rockets slipped through Israel’s vaunted Iron Dome antimissile system and crashed into the city with a greater impact than in the past.

One hit a synagogue, another an empty school. Two women, Nella Gurevitz, 52, and Soumya Santosh, 32, a caregiver, were killed early on when a rocket slammed into their apartment block.

Even once the cease-fire had gone into effect, the marina — with a lagoon of anchored small yachts, and its ice cream parlors and fish restaurants usually packed with people at the start of the weekend — was almost empty, in a measure of popular distrust.

The rocket attacks during this round of fighting killed 12 people in Israel, including two children.

In Gaza, at least 248 Palestinians were killed by Israeli military attacks, including 66 children, according to health officials there, and thousands have been displaced.

A poll published on Israel’s Channel 12 on Thursday indicated that 72 percent of Israelis thought the air campaign in Gaza should continue, whereas 24 percent said Israel should agree to a cease-fire.

Experts said Israel’s widespread support for carrying on the fighting was less an expression of “warmongering” than a desire for long-term stability.

“Israelis are looking for a final conclusion to these operations. People are saying enough is enough is enough,” she said. “Sometimes, one is willing to suffer in order to bring a very unpleasant situation to a close.”

The feeling of a missed opportunity was shared by Prime Minister Benjamin Netanyahu’s supporters and opponents, including residents in Ashkelon, a stronghold of his conservative Likud party.

One of his main rivals, Gideon Saar, a conservative politician and former ally of Mr. Netanhayu’s who broke with the prime minister in 2019, tweeted, “With the best intelligence and air force in the world, Netanyahu managed to extract from Hamas an ‘unconditional cease-fire.’ Embarrassing.”

After the cease-fire came into effect at 2 a.m. in Jerusalem, the skies over the eastern part of the city filled with fireworks as Palestinian residents celebrated what they viewed as a Hamas victory, echoing the predawn celebrations on the streets of Gaza.

By Friday morning, in the contested city where Israeli-Palestinian tensions flared over the past month and ignited the military conflict, cars and buses were stuck in traffic, cafes were overflowing and the main open-air market in West Jerusalem was crowded with shoppers picking up food ahead of the Sabbath.

Sitting at a busy outdoor cafe and passionately discussing the news of the cease-fire with friends, Phillip Cohen, 60, an Israeli contractor, said, “It happened way too early.”

“We needed to achieve a decisive victory against Hamas — one that can really bring us greater quiet — but that unfortunately didn’t happen,” Mr. Cohen added. Pointing to the celebrations in Gaza, he said, “They were jumping for joy. They obviously have not been deterred,” suggesting the next round of violence was on the horizon.

Yaffa Balouka, 58, an officer manager, pushed back against Mr. Cohen, arguing that while she would like long-term quiet too, it was not a realistically achievable goal. “Either way, there will be another escalation or war,” she interjected. “If we can get some quiet now, we should take it.”

Others advocated a diplomatic solution and said Israel should focus less on war and more on fostering a peace process with the Palestinians. Though Israel, like the United States and much of the West, classifies Hamas as a terrorist organization, and Hamas does not recognize Israel’s right to exist, some Israelis said the government needed to undo the blockade it imposes, with Egyptian help, on Gaza.

The blockade, which Israel says is necessary to stop weapons smuggling, has contributed to an unemployment rate of around 50 percent in Gaza, where poverty is rampant.

“War is not the solution to the rocket fire,” said Assaf Yakir, 27, a political science student at the University of Haifa. He recalled feeling disillusioned after serving in the army during the conflict between Israel and Hamas in 2014.

“There was six weeks of fighting and nothing changed in the end,” he said. “It didn’t bring peace or quiet.”

Liora Yaakobov, 25, a postal worker in Ashkelon, said she still would have expected Israel to come out with something more than just a cease-fire. She noted that Hamas was still holding the remains of two Israeli soldiers and two civilians who are believed to be alive. One of them, Avera Mengistu, is from Ashkelon.

In the city’s older neighborhoods — filled with dilapidated housing projects from the 1950s — small, reinforced concrete shelters dotted the sidewalk. But many residents said they were simply too far away to run and take cover, with sirens providing only 10 or 15 seconds warning of incoming rockets.

Mr. Netanyahu promised on Friday to provide more shelters to the “city that absorbed 1,000 missiles” — an ominous message that smacked of the need to prepare for the next round of violence.

Off South Africa Boulevard, in a well-heeled neighborhood where the roads are lined with attractive single-family homes, one had suffered a direct hit on Thursday afternoon, about 12 hours before the start of the cease-fire. A man had been lightly injured from shards of glass and the blast wave, according to emergency medical workers.

Large Israeli flags had been hung on the front fence in a sign of defiance. The back corner of the villa had been blown away and was in danger of collapse. Pictures still hung on the inner walls, unscathed.

Next door, Tzvi and Yehudit Berkovitch, grandparents in their 70s, were hurrying to cook for the Sabbath. They had been in a shelter in the yard when the rocket struck just a few yards away, and had felt the blast.

“It’s annoying,” Ms. Berkovitch said. “In three or four years, there’ll be another round. I think they didn’t finish the job.”

40 years on: Khomeini's return from exile and the Iran revolution