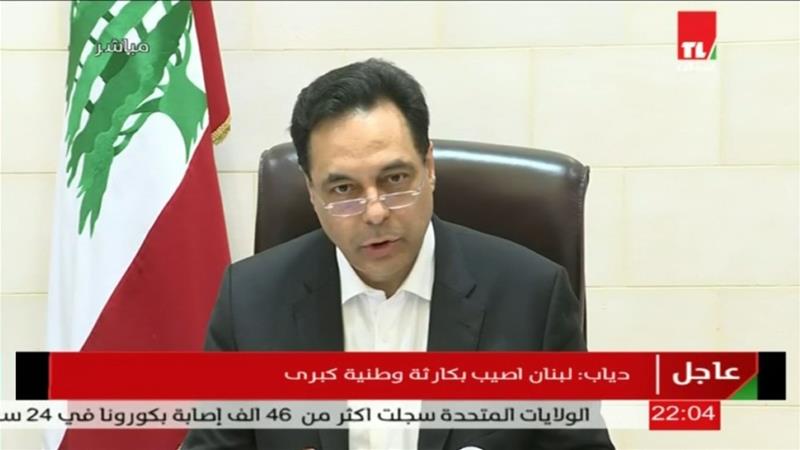 Lebanese Prime Minister Hassan Diab has pledged that those responsible for a massive explosion in Beirut’s port, which killed dozens of people and wounded thousands, would be held to account.

“What happened today will not pass without accountability,” he said in a televised address on Tuesday.

“Those responsible for this catastrophe will pay the price.”

The exact cause of the explosion that was felt across the capital was not immediately clear, but officials said it could be linked to “explosive materials” confiscated and stored in a warehouse “for years”.

Diab, in his speech, promised announcements about “this dangerous warehouse that has been in existence for six years, since 2014.”

The prime minister also appealed for international assistance to help Lebanon, already struggling with its worst economic crisis and a surging coronavirus outbreak.

“I am sending an urgent appeal to all countries that are friends and brothers and love Lebanon, to stand by its side and help us treat these deep wounds,” said Diab, whose government gained confidence in February after anti-establishment protesters forced the resignation fo the government of former Prime Minister Saad Hariri.

‘Chaos in the streets’

The explosion on Tuesday destroyed much of the port, damaging buildings across the capital and sent a giant mushroom cloud into the sky.

“The force [of it] was massive – it destroyed buildings, glass everywhere, and it took lives.”

Beirut hospitals quickly filled beyond capacity, pleading for blood supplies and generators to keep their lights on.

Lebanon, an eastern Mediterranean nation of six million people, is in the throes of an economic meltdown that has crushed businesses, thrown tens of thousands of people out of work and led the currency to dramatically depreciate.

Those hardships have only intensified in the wake of the coronavirus pandemic.

Rocket Hits Green Zone in Baghdad as Tensions Flare Between U.S. and Iran