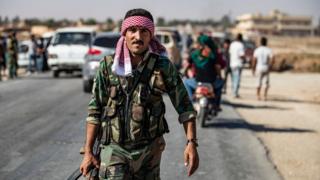 It has taken a week to reshape the map of the Syrian war, in the seven days since President Donald Trump used what he called his “great and unmatched wisdom” to order the withdrawal of US troops from northern Syria.

He set off a chain of events that betrayed America’s ally, the Syrian Kurds, and opened a cornucopia of opportunities for Turkey, the Syrian regime of President Bashar al-Assad, its backers, Russia and Iran, and the jihadist extremists of Islamic State (IS).

Eight years of war in Syria have shaped and changed the Middle East. This last week has been another turning point. Perhaps President Trump’s wisdom helped him to foresee events. Or perhaps his habit of following his gut instincts is a serious mistake when it comes to the infinite complexities of the Middle East.

For years it has been clear that Syria’s fate would be decided by foreigners, not Syrians. Repeated interventions have sustained and escalated the war. Writing about the contest for influence and power in Syria should start with the war’s victims. Every turn of the military screw means disaster and often death for civilians. Video of their suffering should be compulsory viewing for the leaders who give the orders. Those images are not hard to find online and on television.

President Trump’s decision to pull the US out of what he called an endless war gave Turkey the green light to send troops into Syria. Turkey’s President Recep Tayyip Erdogan declared he wanted to go after the Kurds of the SDF (Syrian Democratic Forces) because they are allies of his country’s own Kurdish rebels. His plan is to control both sides of the border with north-eastern Syria, and to set up an occupation zone around 20 miles (32km) deep. Into that zone he wants to move a million or more Syrian refugees. 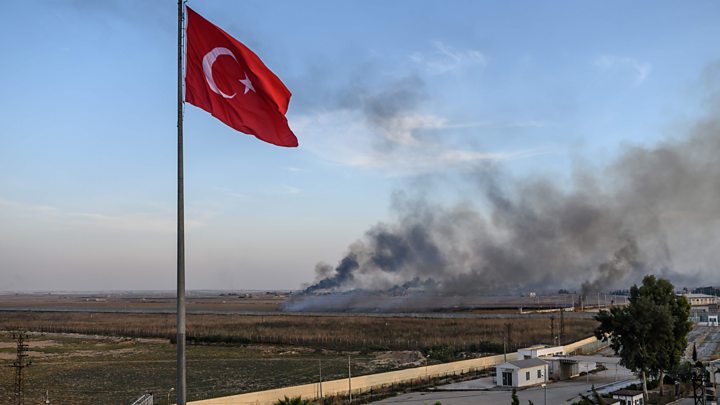 When the US decided to equip and train Syrian Kurds, as well as some Arabs, to fight IS, they were aware of a potential problem, that their would-be Kurdish allies were regarded as terrorists by their Nato ally, Turkey. Washington turned a blind eye to a problem that could be kicked into the future. Now the future is here, and it has blown up.

A week ago, a small number of US troops were the tangible symbol of what seemed to be a security guarantee to the Syrian Kurds, who had become vital allies in the war against the extremist jihadists of Islamic State. The Kurds fought and died on the ground while the US, the UK and others provided air power and special forces troops. When the Caliphate, the self-styled entity of IS fell, the Kurds rounded up and jailed thousands of jihadist fighters.

But in not much more than the time it took President Trump to send some tweets, the Syrian Kurds were forced to recognise that they had been dumped, sparking consternation in the American military.

US Defence Secretary Mark Esper denied that the Kurds had been abandoned. But with the Turks advancing, and the Americans leaving, that is not how it felt for the Syrian Kurds. Once again in their troubled history, Kurds had become the disposable allies of a foreign power. They turned to their old enemies in Damascus.

On Sunday the Kurds announced a deal with the regime of Syrian President Bashar al-Assad, agreeing that its troops could advance into the zone that had not been controlled by Damascus since 2012, right up to the border with Turkey. That is a big victory for the regime. The troops moved quickly out of bases they maintained in the north-east. Assad loyalists dug out regime flags.

It was a disastrous day for American Middle East policy. The alliance with the Kurds, and the security guarantee safeguarding their self-governing slice of Syria, gave the Americans a stake in the war’s endgame. It was also a way of pushing against the backers of the Assad regime: Russia and Iran. The departure of the Americans, and the advance of the Syrian army, are victories for them too.

New opportunities seem to be opening up for the jihadist extremists of Islamic State. On the messaging app Telegram, they have declared a new campaign of violence across Syria. They lost their territory, the “caliphate”, but those who stayed out of jail – or a grave – have reconstituted themselves in sleeper cells to carry out guerrilla attacks.

Now with the Kurds reeling, they see a chance to free the thousands of fighters who are locked up in Kurdish jails. Some of them are notorious killers who would constitute a serious threat if they could get out to carry guns and bombs again, not just in Syria but further afield. Justifiably, western governments are getting nervous about a renewed IS threat.

European governments, rattled in the way that happens when the problems of the Middle East come knocking at their doors, are calling on Turkey to stop the offensive. Some Nato members can see a nightmare scenario unfolding, with Syria, backed by Russian power, potentially facing off against Turkey, a fellow Nato member. The Russians say they are in regular contact with Turkey. But in a fluid, violent theatre of war. the chances for misperception, mistakes and escalation are always present.

Perhaps what has happened in the last week simplifies the endgame of the Syrian war. Two major players, the Americans and the Kurds, look to be out of the picture. And President Assad, along with his allies from Russia and Iran, continue to solidify their victory in Syria’s catastrophic war.

Atrocities on Rohingyas: OIC for suing Myanmar at ICJ