Hichem Mechichi confirmed as PM after his technocrat-dominated cabinet wins backing from nearly two-thirds of deputies. 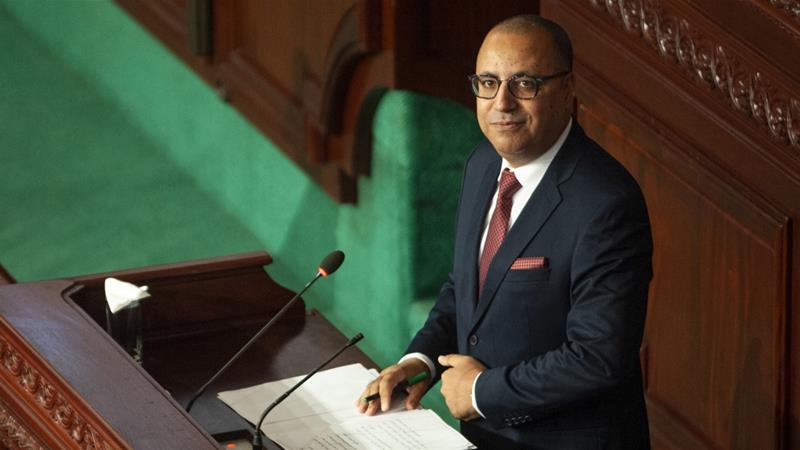 Following a 15-hour session that started on Tuesday, Mechichi’s cabinet – dominated by independent technocrats – won 134 votes out of the 217 members of parliament.

A former interior minister, Mechichi replaces Elyes Fakhfakh, whose government stayed in power for just five months before he resigned as prime minister last month after questions over his business dealings.

Mechichi proposed a government with 25 ministers and three secretaries of state that includes seven women and a blind man – a first in the country’s history.

The 46-year-old has pledged to enact policies seen as critical to revitalising a tourism-reliant sluggish economy that has been hit hard by the coronavirus pandemic.

He gathered the ministries of finance, investment and economy into a single department led by liberal economist Ali Kooli, chief executive of Arab Banking Corporation in Tunisia.

After the vote, Mechichi said his government would be able to “move forward” provided it was not bogged down in political tensions.

Before the session, which was held amid a tussle for influence between President Kais Saied and the main parties, Mechichi defended his nominations in an address to lawmakers.

He said the deteriorating situation in the country calls for competent figures who can intervene quickly and effectively to find solutions to the various problems and challenges.

“The government formation comes at a time of political instability and the people’s patience has reached its limit,” he said.

The new government would focus on “social and economic questions and respond to the urgent concerns of Tunisians,” he added.

Tunisia’s Parliament is deeply divided and many lawmakers were angry that Mechichi bypassed the main political factions in building his cabinet.

Mechichi, a lawyer by training, named judges, academics, public servants and business executives to his cabinet.

Ennahdha, the largest parliamentary force, and others had instead demanded a “political” government that reflects the balance of parties and factions in parliament.

But hours before the vote, the self-styled Muslim Democrats said they would back Mechichi “despite reservations”.

Abdelkarim Harouni, chairman of Ennahdha’s advisory board,  said the party would offer its support “given the difficult situation of the country” but would then seek to “develop and reform this government”.

Tunisia has been praised as a rare success story for the Arab Spring uprisings that swept the region in 2011, bringing down its longtime President Zine El Abidine Ben Ali.

But it is now mired in social and economic crisis, with the official unemployment rate at 18 percent, and in need of new assistance from the International Monetary Fund.

Tunisia’s tourism-dependent economy shrank 21.6 percent in the second quarter of 2020, compared with the same period last year, due to the coronavirus crisis.

Those responsible for Beirut 'catastrophe' will 'pay price': PM