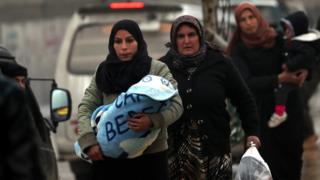 Turkey’s President Recep Tayyip Erdogan says he responded positively to Donald Trump’s call for a “safe zone” along its border with Kurdish-held Syria.

The leaders spoke by telephone after Mr Trump threatened to “devastate Turkey economically” if it attacked a Kurdish militia when allied US troops withdrew.

On Tuesday, Mr Erdogan told Turkish MPs he had agreed that a 32km (20-mile) deep safe zone “will be created by us”.

There was no immediate response from US officials or the Kurdish authorities who control more than 400km of the Turkish-Syrian border.

However, the US president tweeted on Monday night that he had spoken to Mr Erdogan to “advise where we stand” on the safe zone and efforts to eliminate the remnants of the Islamic State group in eastern Syria with the help of fighters from the YPG-led Syrian Democratic Forces alliance.

“Also spoke about economic development between the US & Turkey – great potential to substantially expand!” he added.

Why does the US want a safe zone?

Last month, the president announced that the US would begin pulling out its 2,000 troops from Syria because IS had been “defeated”.

Opponents of the withdrawal expressed fears that the Turkish military and allied Syrian Arab rebels would launch an offensive to drive YPG fighters away from the border, as they did in the predominantly Kurdish western Afrin region a year ago.

The Turkish government considers the YPG an extension of the banned Kurdistan Workers’ Party (PKK), which has fought for Kurdish autonomy in Turkey for three decades. However, it denies any direct organisational links to the group.

On Sunday, Mr Trump tweeted: “Will devastate Turkey economically if they hit Kurds. Create 20 mile safe zone … Likewise, do not want the Kurds to provoke Turkey.”

He did not give any further details, but his Secretary of State Mike Pompeo said on Monday that the president’s aim was to “make sure that the folks who fought with us to take down the [IS] caliphate… have security, and also that terrorists acting out of Syria aren’t able to attack Turkey”.

What is Turkey proposing to do?

On Tuesday, President Erdogan told his Justice and Development (AK) Party he had been “saddened by some messages from Mr Trump’s social media account”.

“We immediately acted and we discussed those issues with him on the phone again last night. It was a positive conversation.”

Mr Erdogan said he had reaffirmed Turkey’s willingness to create a safe zone and that he believed he had “reached an historic understanding with Mr Trump”.

He later told reporters that if the US and other allies could provide logistical support, Turkey “would solve [the issue of] such a safe zone while protecting the security of those people there”.

He also dismissed the idea that the YPG could be involved in such a project. “They are terrorists. Can we leave the safe zone to terrorists?” he asked.

Turkish-backed Syrian rebels control a strip of territory between 13km and 30km deep that runs along the border from Afrin to the western bank of the River Euphrates.

It was captured in two cross-border operations that Turkey has mounted since 2016 as part of its efforts to counter the YPG.

What do Syria’s Kurds say?

The co-chair of the largest Democratic Union Party (PYD) – whose armed wing is the YPG – said last week that Kurdish fighters were “getting ready confront Turkish threats through resistance”.

“Until now there has been no [Turkish] military intervention but if it happens I believe we will be ready to face it, in addition to political and diplomatic work with all sides,” Shahoz Hasan told the Associated Press.

The PYD and its allies have also been holding talks with the Syrian government and Russia in the hope of agreeing a deal for them to protect Kurdish-held areas.

Richard Dannatt: 'Appeasement failed in the past and won't work this time'