Turkey said Saturday that it had provided the United States and other countries with an audio recording of the killing of Jamal Khashoggi, a Saudi-born dissident and American resident who died in the Saudi Consulate in Istanbul last month.

President Recep Tayyip Erdogan of Turkey said his government had turned over copies of the recording to the United States as well as France, Britain, Germany and Saudi Arabia. He was speaking to reporters before flying to Paris for an international gathering to commemorate the end of World War I.

Turkey made the recording available “to all of them, so they’ve also listened to the conversations, they know it,” Mr. Erdogan said. “There is no need to distort this.” It is unclear when or how the Turks shared the audio recording with the other governments. 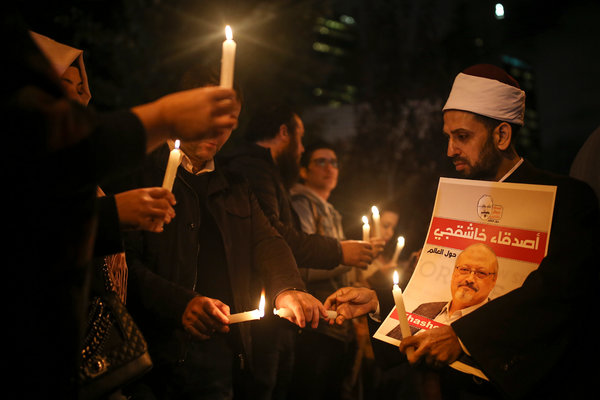 It was the first time Mr. Erdogan has publicly acknowledged the existence of the audio recordings of the killing, presumably obtained through surveillance by Turkish intelligence agencies. The official confirmation will increase the pressure on President Trump and other Western leaders to demand accountability for the killing, specifically from Saudi Arabia.

Mr. Khashoggi, who lived in Virginia and wrote columns for The Washington Post, was killed when he went to the consulate in Istanbul on Oct. 2 to pick up a paper necessary to facilitate his wedding. After initially denying any involvement, the Saudi government has acknowledged that he was killed in a premeditated operation and detained 18 people as suspects. But the Saudis have not said who ordered the killing.

Turkey has said Saudi Arabia sent a 15-member team to kill Mr. Khashoggi and dispose of his body. Mr. Khashoggi was said to be dismembered and his remains have yet to be found.

Turkish and Western officials have previously discussed the existence of the audio recordings only on the condition of anonymity. Turkish officials have said that the audio includes clear evidence of a premeditated killing in which a team of Saudi agents moved quickly to dismember Mr. Khashoggi’s body with a bone saw in order to dispose of his remains.

Gina Haspell, the director of the C.I.A., flew to the Turkish capital, Ankara, last month to meet with her Turkish counterparts. Both Turkish and American officials said she was allowed to hear, but not take with her, the audio recording.

Western intelligence agencies, many current and former officials, and most experts on Saudi Arabia have concluded that the operation to kill Mr. Khashoggi could only have been carried out with the order of the de facto ruler of Saudi Arabia, Crown Prince Mohammed bin Salman.

But President Trump has so far stood by the crown prince, who the White House has embraced as its most critical Arab ally in various strategies to roll back Iranian influence or press the Palestinians to reach a peace agreement with Israel.

American officials said on Friday that the Trump administration is ending air refueling flights for the Saudi military campaign in Yemen and preparing sanctions against Saudis linked to the killing. Mr. Trump has vowed “severe” consequences, but resisted canceling arms sales despite bipartisan pressure from Congress.

Ilan Pappe: Palestinians don't need US for their statehood