WASHINGTON — A cache of powerful American missiles was sold to France before ending up in the hands of rebel fighters loyal to Gen. Khalifa Hifter, who is seeking to overthrow the United Nations-backed government in Tripoli.

The four Javelin anti-tank missiles, which cost more than $170,000 each and are usually sold only to close American allies, were recovered last month by Libyan government forces during a raid on a rebel camp in Gheryan, a town in the mountains south of Tripoli.

A French military adviser denied on Tuesday that the weapons were transferred to General Hifter, which would violate the sales agreement with the United States as well as a United Nations arms embargo. It would also put Washington at odds over Libya policy with France, a staunch NATO partner and ally in other hot spots like West Africa.

Over the past several days, the State Department investigated the origins of the missiles, using their serial numbers and other information, and concluded that they had originally been sold to France, which has been a strong supporter of General Hifter. France agreed to buy up to 260 Javelins from the United States in 2010, according to the Pentagon’s Defense Security Cooperation Agency.

Two United States officials said the State Department briefed House and Senate foreign relations committees on Monday about its conclusion that the missiles were sold to France. The two officials spoke on condition of anonymity to discuss the classified briefing. Spokesmen for the congressional committees and the State Department declined to comment.

On Tuesday, an adviser to the French armed forces minister confirmed that the Javelin missiles found in Gheryan belonged to French forces but said they were damaged and no longer usable. Responding to questions from The New York Times, he said the missiles were being temporarily stored in a warehouse awaiting destruction and were not transferred to local forces.

The French adviser, who under his government’s policy was not authorized to be identified by name to discuss the issue, said the weapons were among those that were bought from the United States in 2010, and were intended to protect French troops deployed in Libya for intelligence and counterterrorism operations.

He said they did not violate arms embargoes in Libya, calling it out of the question that the missiles would be sold or otherwise transferred to “anybody” in Libya.

But that account left many questions unanswered about how the weapons ended up in a rebel compound near the front lines of a battle that the United Nations said on Thursday has led to over 1,000 deaths since April, including 106 civilians.

French special forces troops deployed to Libya, including three killed in 2016, have largely been based in the east of the country, far from Tripoli where the fighting has been concentrated.

The issue will almost certainly be raised on Wednesday when the Senate Foreign Relations Committee hears testimony from R. Clarke Cooper, the assistant secretary of state in the bureau of political-military affairs. Mr. Cooper is scheduled to testify about the Trump administration’s use of an emergency declaration to push through arms sales to Saudi Arabia and the United Arab Emirates, a plan he defended last month to a House committee. 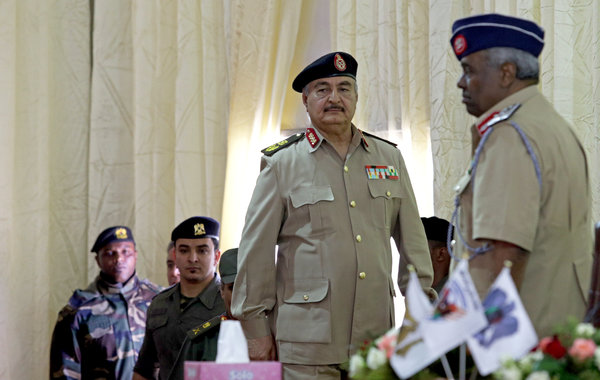 The Javelin missiles were discovered after forces loyal to the United Nations-backed national unity government carried out a successful surprise attack on June 26 on Gheryan, a mountain redoubt 40 miles south of Tripoli. Gheryan was the headquarters for General Hifter’s military campaign to seize control of Tripoli.

After capturing Gheryan, pro-government fighters uncovered Chinese-made attack drones and the stack of four American-made Javelin missiles at an abandoned base. Known in the military as “fire and forget” weapons, the Javelins are guided by infrared technology and are capable of destroying all currently fielded main battle tanks.

Markings on the missiles’ shipping containers at first appeared to indicate that they were originally sold to the United Arab Emirates, an important American partner, in 2008. Other crates at the captured base, containing 155 mm artillery shells, had markings of the Emirati military, but the Emirati government, one of General Hifter’s most committed foreign backers, strongly denied providing the general’s forces with the missiles.

The discovery of the Javelin missiles confirmed longstanding fears that foreign sponsorship on all sides of Libya’s conflict is amplifying the fighting.

General Hifter, the aspiring strongman based in eastern Libya whose forces were storing the Javelins, relied on military assistance from the United Arab Emirates, France and Egypt in his fight to capture the eastern city of Benghazi, his current headquarters.

During the grinding battle for control of Benghazi between 2014 and 2017, the Emiratis supplied attack helicopters, warplanes and drones to General Hifter’s air force. Egypt carried out airstrikes against the eastern city of Derna in support of his forces.

Then in July 2016, the then-president of France, François Hollande, said that three members of the French Special Forces had been killed in a helicopter crash in Libya during “dangerous intelligence operations.” Days earlier, an Islamist militia fighting against General Hifter said it had shot down a helicopter 45 miles south of Benghazi.

A year later, France told a panel of United Nations investigators that its military activities in Libya conformed to international law.

Critics, though, said it was another example of how the United Nations arms embargo, in place since 2011, has been widely flouted by Middle Eastern and European powers seeking to influence the outcome of the war.

United Nations inspectors have documented numerous breaches of the embargo by the United Arab Emirates, which has stationed warplanes on an air base that it runs in eastern Libya, in territory controlled by General Hifter. More recently, experts say, the Emirates has stepped up its military assistance to General Hifter as he presses his assault on Tripoli, including armed Chinese drones and a Russian-made surface-to-air missile system.

On the other side of the war, Qatar and Turkey have funded Islamist factions in Libya since 2011. American officials say the Qataris have scaled back their involvement in recent years, but Turkey has ramped up its own engagement.

As the fight for Tripoli intensified, the Turks sent armed drones and armored vehicles to the forces of the Government of National Unity, which is backed by the United Nations and was defending the capital against attack by General Hifter.

Eric Schmitt reported from Washington, and Declan Walsh reported from London. Additional reporting was contributed by Elian Peltier in Paris.

Q&A: Was Pakistan PM Imran Khan's visit to the US a success?