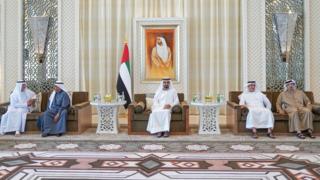 The UAE has been mocked over a tweet announcing the winners of awards for gender balance that featured only men.

The sheikh insisted women were “central to shaping the future of the country”.

But many Twitter users questioned their apparent absence from the ceremony.

A statement by the official Dubai Media Office meanwhile cited Sheikha Manal bint Mohammed bin Rashid Al Maktoum, president of the UAE Gender Balance Council, as saying it had achieved a goal set in 2015 to reduce the gender gap across all sectors of government.

In April, the UAE cabinet approved legislation to ensure equal pay for women.

But last month the country was ranked 121st out of 149 countries overall in the World Economic Forum’s 2018 Global Gender Gap Report and 134th in terms of economic participation and opportunity.

The report said there had been a reduction in the gap with regard to legislators, senior officials and managers, counterbalanced by a widening overall wage gap.

Coronavirus: What impact is the pandemic having on Middle East conflicts?

Gaza's onion boy: My goal is to take back my grandparents' land