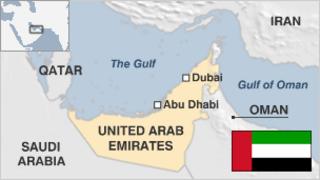 The United Arab Emirates (UAE) is a federation of seven states that has grown from a quiet backwater to one of the Middle East’s most important economic centres.

Though traditionally conservative, the UAE is one of the most liberal countries in the Gulf, with other cultures and beliefs generally tolerated. Politically it remains authoritarian, however.

Relations with neighbouring Iran have been tense because of an ongoing territorial dispute over Gulf islands. The UAE was one of only three countries to recognise Taliban rule in Afghanistan.

Before oil was discovered in the 1950s the UAE’s economy was dependent on fishing and a declining pearl industry. But since oil exports began in 1962, the country’s society and economy have been transformed.

The UAE has diversified and has become a regional trading and tourism hub. UAE firms have invested heavily abroad.

Abu Dhabi President Sheikh Khalifa bin Zayed, who has a reputation as a pro-Western moderniser, was named as president by the UAE Federal Council in November 2004, shortly after the death of his father, Sheikh Zayed Bin-Sultan Al Nahyan.

The UAE is governed by a Supreme Council of Rulers made up of the seven emirs, who appoint the prime minister and the cabinet.

The UAE is a regional and international centre for TV and media. Dubai Media City and twofour54, Abu Dhabi’s media zone, were set up to attract key international players such as Reuters, CNN, Sony and Fox.

There is strong regulatory and political control of media content and even foreign publications are censored before distribution.

With 8.8 million users, the UAE has one of the highest internet penetration rates in the Arab world. But it is extensively filtered; targeted content includes opposition politics and religion.

Some key dates in the UAE’s history:

2006 – First-ever national elections. A small number of hand-picked voters choose half of the members of the Federal National Council – an advisory body.

2015 – The UAE takes part in Saudi-led air strikes on Houthi rebels in Yemen.