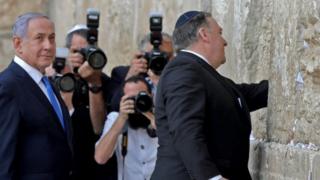 I was sitting on the Israeli prime minister’s terrace when President Trump’s tweet dropped. A current of surprise and expectation sizzled through the state department press corps.

We had been following US Secretary of State Mike Pompeo around Jerusalem’s holy sites and were waiting for a final word from him and Benjamin Netanyahu to wrap the day.

But they delayed their appearance long enough for us to wonder whether Mr Trump’s Twitter announcement had also caught them off guard. If so, it was a welcome surprise for Mr Netanyahu: “I’m so excited,” were his first words to us.

The surprise would have been in the timing, not the substance. The idea of the US recognising Israel’s sovereignty over the occupied Golan Heights has been under active consideration in the Trump administration for some time, pushed with greater intensity by Israeli officials in recent months.

It is a major shift. For decades the US and most of the world have rejected Israel’s occupation of the Golan Heights, seized from Syria in the 1967 Arab-Israeli war. To paraphrase the principle enshrined in the UN charter: you can’t keep land that you capture, you have to negotiate its fate. Mr Trump has overturned that.

What questions does this raise?

First and foremost is one of international law: in recognising Israeli sovereignty over the Golan, Mr Trump is in effect endorsing its seizure of the territory. By what moral authority then could he challenge others who do the same, such as Russia’s annexation of Crimea?

Secondly, Mr Trump said he made the decision for strategic and security reasons, by which he means Iran.

His administration is convinced Iran is using Syria as a base to target Israel, and the Golan Heights are the front line.

That’s a compelling argument for the White House and some members of Congress, and one aggressively pushed by the Israelis.

But formal recognition of Israel’s sovereignty over the Golan doesn’t change anything on the ground. It’s already acting with full military authority there.

So it’s widely believed by observers and commentators both here and in Washington that the president made the announcement now to give Mr Netanyahu a boost in hotly-contested elections.

Mr Trump has brushed aside such suggestions, but his plans to welcome the Israeli prime minister to the White House twice next week will only reinforce them.

How will this affect the cross-border conflict in Syria?

Israel strikes regularly at Iranian targets in Syria, carefully negotiating the situation with Russia, which provides crucial military backing to the Syrian state.

It’s a delicate balance and it’s not clear how or whether the American move will upset it.

On the one hand, Syria has been weakened by the civil war, and the Iranians have been weakened by US sanctions. That gives Israel an opportunity to exert its claims, with the help of its friend in the White House.

On the other hand, there was no open controversy about Israel’s control of the Golan Heights. Pushing the issue above the radar might inflame the low-grade conflict with Iran and its Lebanese ally Hezbollah, stoking regional tensions. And Russia is unhappy, very unhappy.

How will this affect the West Bank?

The occupied West Bank is different from the Golan Heights. It was also captured by Israel in the 1967 war, from Jordan.

But it has a large Palestinian population seeking self-determination and promised statehood in more than 20 years of peace talks.

Supporters of this peace process are concerned that recognising Israeli sovereignty over the annexed Golan Heights will create momentum for annexation of the West Bank.

This fear is not without grounds. Members of the right wing coalition headed by Prime Minister Netanyahu have been pushing for annexation. In Mr Netanyahu’s own Likud party, 28 out of the 29 lawmakers running for re-election are on record as supporting this approach.

He is the only exception and, beset by charges of corruption and stiff competition from the opposition, has demonstrated he’ll go to great lengths to hang on to power.

How will this affect Trump’s peace proposal?

The Golan move reinforces the impression that the Trump administration is redefining the parameters of US policy in a way that favours Israel: Mr Trump has already recognised the contested city of Jerusalem as Israel’s capital and cut funding to the UN agency in charge of Palestinian refugees demanding a right of return to a homeland.

It has also stopped virtually all assistance to the Palestinian Authority, charging it with funding terrorists and rejecting the peace initiative. If the PA continues to reject what’s on offer – when it is finally offered – it’s likely that Israel’s hand will be further strengthened to shape the outcome.

However, the plan will need a buy-in from Arab countries who’ve long pushed for the return of territory occupied by Israel.

Many are more preoccupied with a perceived threat from Iran than with the Palestinian cause, and have signalled a willingness to support the Trump peace initiative. But his Golan decision will complicate their ability to publicly do so.