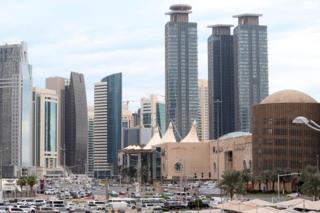 In addition, the states announced that they were suspending air, sea, and land transport with Qatar, while Qatari citizens are required to return home within two weeks.

Qatar’s support of the Saudi and UAE-led operations in Yemen is also suspended.

This might seem familiar. These states (aside from Yemen) withdrew their diplomats from Doha in 2014 over a similar set of concerns. That spat was resolved within nine months. But the core issues remain.

On this occasion, though similar motives fuel the dispute, the fact that Qatar’s land border with Saudi Arabia – its only land crossing – will be suspended shows a severe escalation, given just how critical this border is for Qatar’s imports, including food.

Reports emerged in late May 2017 of a speech given by the Qatari Emir, Tamim bin Hamad al-Thani, where he was purported to have criticised America, offered support for Iran, reaffirmed Qatar’s support for Hamas and the Muslim Brotherhood, and said that Qatar’s relations with Israel were “good”.

Qatar’s official news agency then also reported that Qatar was withdrawing its ambassadors from Saudi, Bahrain, Egypt, and the UAE after discovering a “conspiracy” against Qatar. Subsequently, Qatari officials furiously denied that there was any truth behind these reports, but the damage was done.

The key problem was that these comments simply voiced out loud what many have long understood as Qatar’s true policy positions.

Qatar has long had a tense relationship with the US. On a military-to-military level, the two countries co-operate well generally. But the US has long been angered by what it sees as slanted coverage in the Middle East by Qatar-owned Al Jazeera, Qatar’s apparent support for a range of Islamist groups around the region, and lax anti-terrorist financing laws.

Similarly, Qatar has been bold in its support of Hamas, the Palestinian militant group affiliated to the Muslim Brotherhood. In May 2017, Qatar used its influence to push Hamas to issue a policy document seen by some as an attempt to soften its extremist image.

But support for Hamas places Qatar deeply at odds with many states, such as the US, who view Hamas as a terrorist organization. And the other Gulf monarchies prefer to deal with its secular rival Fatah as representatives for the Palestinians.

But the problem is that Qatar is just too bold, too often.

The core issue presently is Qatar’s support of Islamists around the Middle East region, which emerged quite evidently during the Arab Spring. This is as much a result of the personalised politics of Qatar’s foreign policy and elite bureaucracy as it is an active decision by Qatar to support Islamists.

Moreover, Qatar argues vociferously that it does not support Islamists because the state prefers to, but because such groups like the Islamist Muslim Brotherhood enjoy significant public support.

Either way, the UAE in particular, but also Saudi Arabia, do not agree at all with this approach of emboldening Islamist groups around the region. They tried to get Qatar to stop doing this in 2014, but, a few concessions aside, the broad tenor of Qatar’s foreign policy approach did not change.

Otherwise, particularly under the leadership of the former Emir Hamad bin Khalifa al-Thani, Qatar sought to carve out a unique niche for itself and its policies, such as augmenting relations with Israel or Iran, and rejecting the wider consensus of the regional group of the monarchies, the Gulf Co-operation Council (GCC).

Saudi Arabia withdrew its ambassador to Doha from 2002 to 2008 to try to pressure Qatar to curb its individualistic tendencies. This approach broadly failed too.

Saudi Arabia and the UAE, the leaders of this current move, will not want to fail again. And their position is strong, while Qatar’s is weak.

Saudi Arabia and the UAE are emboldened. Leading the intervention in Yemen in 2015 displayed a newfound desire to truly lead on matters of regional security. And the UAE has, not least with a decade’s operations alongside Isaf forces in Afghanistan, forged a reputation for itself as one of the US’s most reliable Arab partners.

Then President Trump unprecedentedly took his first foreign visit to Saudi Arabia, and signed the largest weapons deal in history.

The only real card that Qatar holds with Washington is that it has, since the early 1990s, hosted a critical US base at al-Udeid. But this may no longer be enough. Other Gulf states may stand ready to replace this key base, though the logistics of this would not be straightforward.

The argument to President Trump may be compelling: with US help, Qatar might be persuaded to evict Hamas leadership from Doha and genuinely cut back on funding Islamist groups.

It seems that the time of Qatar’s individualistic foreign policy may be up.

Dr David Roberts is a lecturer in the Defence Studies Department at King’s College London. He was the Director of the Qatar office of the Royal United Services Institute (Rusi). He is the author of Qatar: Securing the Global Ambitions of a City State. Follow him on Twitter @thegulfblog

Iran sentences man to death for spying for US: Report